Stocks in the Spotlight Tuesday 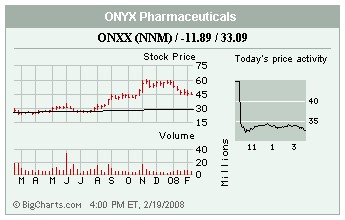 Shares of the biopharmaceuticals company plunged 26% after Onyx said it and partner Bayer ended a study for Nexavar in lung cancer, citing lack of efficacy and increased mortality. The company also reported that losses narrowed in the fourth quarter from a year ago, but that news was overshadowed by the halted trial. Bear Stearns analyst Akhtar Samad placed under review the Peer Perform rating on Onyx and noted the news was favorable to ImClone Systems' Erbitux. 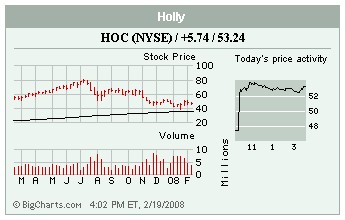 The independent petroleum refiner and marketer saw shares rally 12% after reporting strong fourth-quarter earnings. Back Bay Research analyst Jacques H. Rousseau maintained a Buy rating and $85 price target. "Holly is our top pick in the refining sector due to the significant amount of upside that we expect from its capital projects in 2008-2009," Rousseau wrote in a research report. 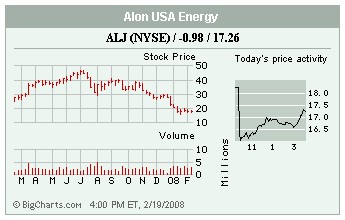 An explosion and fire Monday at Alon's Big Spring, Texas, refinery will shut down production at the 70,000 barrels-per-day facility. As of Tuesday the cause hadn't yet been determined, but based on a preliminary assessment, Alon expects to resume partial operations in about two months. Shares slipped 5.3%. 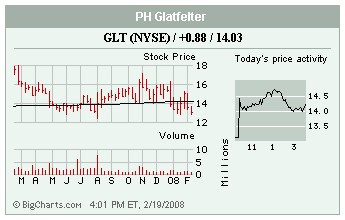 The maker of specialty paper and engineered products saw shares rise 6.7% after a strong fourth-quarter report. Standard & Poor's Equity Research analyst Stuart Benway reiterated a Strong Buy rating on PH Glatfelter and kept the 12-month target price at $18. "Although the economy is showing signs of slowing, we are cautiously optimistic that PH Glatfelter can generate solid earnings-per-share growth this year," Benway wrote in a note.

The charts record the net change in share price, the high, low and closing trades, and share volume for companies with noteworthy stock activity last week. In addition, the graphs depict last week's daily price activity in detail. The dotted line on some graphs denotes the stock's 200-day moving average; lack of a moving average means the shares have traded for less than that time period.

The smaller charts record the daily movement in 15-minute intervals.

Comments? E-mail us at online.editors@barrons.com