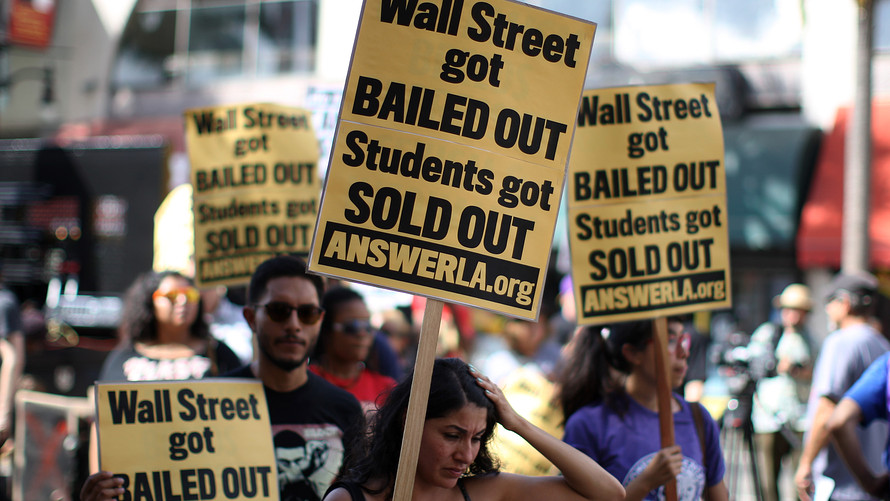 “It’s a pleasure to be here, finally,” are not the words you might expect to hear from someone preparing to share their story of student debt woe to a room full of strangers. But that’s exactly how John Carter, a 77-year-old New York City resident, began before recounting the years of hassle he faced becoming current on his debt to a group of advocates and regulators gathered to hear how the student loan crisis is affecting New Yorkers like him.

Carter first took out a student loan in the 1980s, but said he didn’t receive any information about repaying the loan for the next several decades. Then in 2013, he discovered that the government was taking a portion of his monthly Social Security income to pay his debt, which by then was in default. He entered into an agreement with his debt collector in an effort to cure his default, which required him to make several monthly payments on top of his garnishment to become current on his loan. Carter made most of the payments, but his checking account number switched midstream. The company didn’t process his next payments correctly and they informed him he would have to start the process all over again, at which point Carter was “ticked,” he told the crowd.

Ultimately, Carter cured his default with the help of legal advocates through a faster process that the company never told him about, even though he had a right to it under the law the whole time. Now Carter is using a payment program offered by the government that allows borrowers to cap payments as a percentage of their income. He’s able to stay current on his loans by making payments of zero dollars a month.

“This is a very common story we see,” Evan Denerstein, Carter’s lawyer and a senior staff attorney at MFY Legal Services, an organization that provides legal counsel to low-income New Yorkers, told the room.

Denerstein and other advocates organized the event earlier this week to bring attention to the plight of borrowers like Carter to federal and state regulators. These borrowers regularly struggle to access the protections and rights that federal student loan borrowers are guaranteed through their servicers, the private companies hired by the government to handle the student loan repayment process, he said. Instead, these borrowers are turning to legal advocates for help.

Consumer advocates have long complained that student loan servicers don’t do enough to help borrowers manage the student loan repayment process. For their part, the National Council of Higher Education Resources (NCHER), a trade group that represents many student loan servicers and debt collectors, says its members follow guidelines, contract requirements and regulations to ensure that borrowers receive assistance curing their defaults and enrolling in the payment program that best fits their needs.

“NCHER members work closely with student loan borrowers to provide them with high-quality services that help borrowers manage their student loan debt,” Pam Shepherd, a spokeswoman for the organization, said in an emailed statement.

The Department of Education is also in the midst of creating a new servicing system that aims to eliminate confusion and push servicers to act in borrowers’ best interest. In the meantime, some states, like Connecticut, have already taken steps to regulate servicers in their own jurisdictions. Denerstein said he’s ultimately hoping for something similar in New York, ideally through a system where New York’s Department of Financial Services licenses and regulates the companies. The agency is interested in exploring the idea, a spokeswoman said, but it would take action from legislators to give the regulator the power to oversee those companies.

“What we would like to do is come together to come up with a more systematic approach to dealing with these issues, instead of just dealing with them on a one-off basis through individual complaints,” Denerstein said.

And it appears that there are a lot of complaints, if the forum was any indication. One lawyer said he routinely encounters borrowers who are unable to work because they’re disabled and therefore eligible to have their loans forgiven, but their servicers “really put them through the wringer” to prove they’re earning below the income threshold that makes them eligible for the discharge.

Mary, a Bronx resident, told the crowd about her decades-long struggle to repay loans that were actually eligible to be discharged all along. Mary attended a computer entry program at a for-profit college in the late 1980s. She wasn’t even aware that her school requested $6,000 in loan-based financial aid under her name until 2002 when she noticed money was being taken from her tax refund to offset the debt. She made more than $12,000 in payments on the loan through an agreement with her debt collector for the next 15 years.

Mary said that none of the companies handling her federally guaranteed debt ever told her that she was actually eligible to have the loan wiped away because there was widespread proof that the school — now shuttered — engaged in fraud when signing up borrowers like Mary for loans. She found out minutes before the forum that more than $14,000 in interest and fees she still owed would be discharged and she would receive a refund of the money she already paid, thanks to the help of legal advocates at Legal Services NYC.

Other advocates shared stories of borrowers at a loss to find reliable information about their loans. Eve Weissman, a staff attorney at the New Economy Project, a nonprofit focused on addressing inequality in New York City, recounted a recent phone call the organization received through its hotline. That borrower struggled to get accurate information about his loans and the process for getting them out of default — an urgent consideration because his wages were being garnished to the tune of $600 a month to pay off his debt. He even turned to a scam operator for a period, who promised to cure his default for a fee, something he had a right to through his debt collector for free. After much research and heartache he eventually got the $300 he paid to the scam operator back and begin the process towards becoming current on his loans.

Still, his trials indicate that “surely we can do better,” Weissman said.

The regulators gathered seemed to agree. Seth Frotman, the student loan ombudsman at the Consumer Financial Protection Bureau, said that in many cases servicers are falling short. Frotman said he often hears from housing and other financial counselors interested in helping clients tackle their student debt, but that theoretically shouldn’t be necessary.

Student loan debt has grown exponentially in a short period and the regulatory structure around student loan-related products hasn’t quite caught up, he said. Often consumer finance experts and regulators leave questions about how to address student debt to the higher education community, which is typically focused on access to education, he said. But that ignores the reality that 44 million Americans who already attended school are truly facing a financial challenge.

“Their lives wouldn’t be better if we passed free college tomorrow,” he said.