Super Bowl 2021: Why brands like Coke, Budweiser and Pepsi are benching their stars from in-game commercials this year 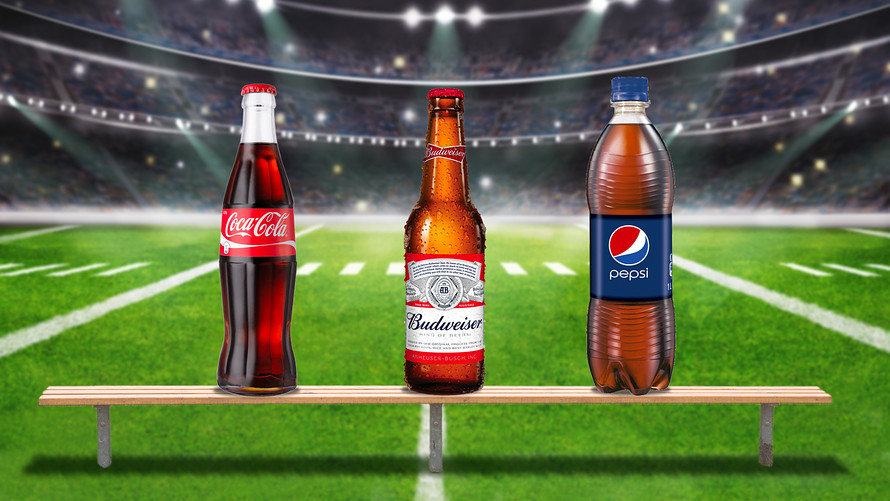 That’s because some familiar favorites like Coke and Budweiser won’t be competing for attention with multimillion-dollar in-game ads when the Kansas City Chiefs face the Tampa Bay Buccaneers for Super Bowl LV on Feb. 7. In fact, beverage makers Anheuser-Busch /zigman2/quotes/202879787/delayed IT:ABI +1.13% , Coca-Cola /zigman2/quotes/209159848/composite KO +1.63%  and PepsiCo /zigman2/quotes/208744353/composite PEP +0.63%  are all benching their star players from in-game commercials during this already unprecedented pandemic NFL championship. Auto maker Hyundai /zigman2/quotes/204364212/composite HYMTF +2.72%  and Avocados From Mexico are also sitting this Super Bowl out — making room for newbies like Chipotle /zigman2/quotes/200781108/composite CMG +1.70% , DoorDash /zigman2/quotes/222973991/composite DASH -1.08%  and Huggies to join the big leagues with their first-ever Super Bowl spots.

So why are so many all-star brands skipping one of the most-watched television events of the year? Their parent companies claim to be shuffling their playbooks for several reasons, such as reallocating their ad spending toward COVID-19 relief, or reevaluating the best way to use those millions as the pandemic continues to take an enormous human and financial toll.

This week, Anheuser-Busch announced that it is foregoing its traditional in-game Super Bowl airtime, and plans to use that money to support COVID-19 vaccine awareness, instead. While the company wouldn’t give an exact dollar amount, a spokesperson told MarketWatch that the total donation to vaccine education and awareness will be on par with the cost of advertising in the Super Bowl, calling it a “multimillion-dollar commitment.” That figure could be around $5 million or more, then, as ViacomCBS  is reportedly seeking around $5.5 million to $5.6 million for 30-second Super Bowl spots .

This will be the first Super Bowl in 37 years without an in-game Budweiser commercial. And it’s the first time in 20 years that neither Coke nor Pepsi bought an in-game Super Bowl ad for their marquee brands.

But it should be noted that Budweiser will still produce a digital Super Bowl spot that will be promoted online. And AB InBev’s other brands, including Bud Light and Michelob ULTRA, are still getting play in national in-game Super Bowl commercials.

In a similar move, while PepsiCo didn’t buy a traditional 30-second spot for its signature Pepsi brand soda, it has purchased six other ads for Mountain Dew and its Frito-Lay products. And it’s choosing to double-down on the Pepsi Super Bowl Halftime Show starring The Weeknd this year, instead ... which is basically a 12-minute Pepsi commercial, anyway.

Coca-Cola Co., Hyundai and Avocados From Mexico, on the other hand, all say that they are taking a timeout from in-game advertising this year to do some housekeeping.

Coke has been trimming expenses and products after the pandemic largely shut down the restaurants, bars, movie theaters and stadiums that would normally drive sales of its drinks around the world. The company announced it was cutting 2,200 jobs globally last month, including 1,200 in the U.S.

“The Coca-Cola Company has made the decision to sit this year out of the Big Game. This difficult choice was made to ensure we are investing in the right resources during these unprecedented times,” a company spokesperson told MarketWatch by email. “We’ll be toasting to our fellow brands with an ice-cold Coke from the sidelines.” While the company wouldn’t share how much money it will save by sidelining its marquee soda brand from a Super Bowl spot, Coke spent $10 million in commercials placed in Fox’s 2020 broadcast of Super Bowl LIV, according to global insight and analytics firm Kantar.

On the flip side, Avocados From Mexico has enjoyed record-breaking sales as more Americans cook at home. The company sold 2.1 billion pounds of avocados in the U.S. this fiscal year , and expects to sell 2.3 billion pounds in 2021. But Ad Age reports that CEO Alvaro Lugue recently told produce trade publication The Packer that the company is also “using this year as a year to reinvent ourselves and do some things differently before we come back in 2022 to the Super Bowl again.”

A Hyundai spokesperson also told Ad Age that it was pulling out of this year’s Super Bowl “based on marketing priorities, the timing of upcoming vehicle launches and where we felt it was best to allocate our marketing resources.” But they added, “We will certainly be back.”

There are plenty of other factors at play, as well.

Most companies start planning and creating their Super Bowl ads as far in advance as the summer before the big game. But whether there would even be a Super Bowl in 2021 was still up in the air until just recently, which drastically cut the lead time for coming up with commercials worthy of a multimillion-dollar price tag. “I don’t think all of their ducks were in a row to get that creative out,” said Satya Menon, who leads the return-on-investment practice at Kantar. She told MarketWatch that many brands probably mulled over whether it was better to go into the game with “a half-hearted ad, or is it better to just sit it out?”

“I think that’s how some companies definitely played it,” she said.

What’s more, the tense and divisive social and political landscape of the past year has probably given companies reason to pause. “People are being very careful about what emotional tonality to bring,” Menon said, anticipating that the ads that do hit the air this year will embrace humor to relieve the tension. “There’s a little bit of ‘let’s tread carefully in this environment’ that may also have played into” deciding to skip this year’s Super Bowl.

CBS announced it had only just sold out of commercial inventory for Super Bowl LV on Jan. 27, which was just about a week and a half before the game. Meanwhile, Fox reported selling out its advertising inventory for the 2020 Super Bowl by November 2019.

What’s more, last year’s Super Bowl, which aired about a month before the U.S. began enforcing economic shutdowns to slow the spread of COVID-19, raked in a record $450 million in ad revenue, Kantar reported , with Anheuser-Busch being the biggest spender, followed by Procter & Gamble and PepsiCo. Coke and Hyundai were also among the top 10 Super Bowl advertising spenders last year. And the four of them have all withheld ads this year.

In fact, this will be the first Super Bowl in 37 years without an in-game Budweiser commercial. And it’s the first time in 20 years that neither Coke nor Pepsi bought an in-game Super Bowl ad for their marquee brands.

But Menon noted that these absences could turn into power plays. For example, Sam Adams has spoofed the Budweiser Clydesdales in its own Super Bowl commercial ... which has created even more buzz around Bud tapping out this year. “Their absence might be as noticeable as being present. People are thinking about why they’re not there, and talking about what they actually did, which is a PSA,” she said. “I think they actually played a smart game.”

And this has also made room for newbies like food delivery service DoorDash, online marketplace Mercari and online freelance platform Fiverr, which have benefited from people spending more time at home, to make their marks by entering their own Super Bowl ads for the first time. The Kimberly-Clark-owned /zigman2/quotes/201766540/composite KMB -0.55%  Huggies will also air the first-ever diaper commercial during a Super Bowl with its second-quarter spot featuring babies born on game day.

“You have a lot of e-commerce players coming in,” Menon added. “And they will actually get a lot of bang for their buck in creating awareness for their brands and what they actually do.”

In fact, since Americans will likely be catching the game at home with just a few family members this year as many bars and restaurants remain closed and the pandemic rages on, advertisers may have a more captive audience than ever. After all, smaller Super Bowl watch parties means a noisy bar or a house full of screaming friends and family probably won’t be drowning out what’s happening on the screen, for a change.

“There could actually be more attention being paid to what’s going on in the ads this year,” said Menon. “This is actually a big opportunity that I think brands that backed out are losing out on.”