Net profit in the year ended March 31 dropped 66% to £65 million ($104 million) from £194 million a year earlier, as the company booked several exceptional charges at its U.S. operations. 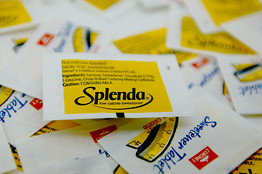 Charges and costs in the latest quarter include £28 million for the expansion of its ethanol plant in Loudon, Tenn.; £24 million from a dispute with a supplier about ethanol-dehydration equipment at the Loudon and Fort Dodge, Iowa, plants; and a loss of £24 million on its discontinued International Sugar Trading and Eastern Sugar businesses.

"Although the new financial year has started in line with our expectations, the continuing global recession, and its uncertain impact on customer demand, makes it difficult to predict with confidence the outlook for the year ending March 31, 2010," Tate & Lyle said in a statement.

The company said it will close its factory in McIntosh, Ala., that makes Sucralose. The artificial sweetener, which trades under the name Splenda, had been the key plank in outgoing Chief Executive Iain Ferguson's project to turn Tate & Lyle into a "value added" food company rather than a food-commodities business. Demand for the product has been far weaker than hoped, however.

Tate & Lyle said all of the company's Sucralose will now be produced at a more efficient plant in Singapore. The Alabama plant closure will result in an exceptional charge of £97 million in the 2009 fiscal year, with a further £60 million to be paid over three years.

Tate & Lyle has suffered a torrid couple of years, posting a series of profit warnings and disappointing results. The company recently postponed the startup of its Fort Dodge ethanol plant until market conditions improve earlier, and last month suffered a further setback when a U.S. court ruling on its Sucralose patents left its key artificial sweetener exposed to low-cost generic imports.

Last week, the company named Javed Ahmed, the head of Reckitt Benckiser PLC's European division, as a replacement for Mr. Ferguson. Mr. Ferguson, who joined as chief executive from Unilever PLC in 2003, will stay in his role until Mr. Ahmed joins the company, at some time between now and Nov. 15, the company said.

Associated Press contributed to this article.

Write to Michael Carolan at michael.carolan@dowjones.com