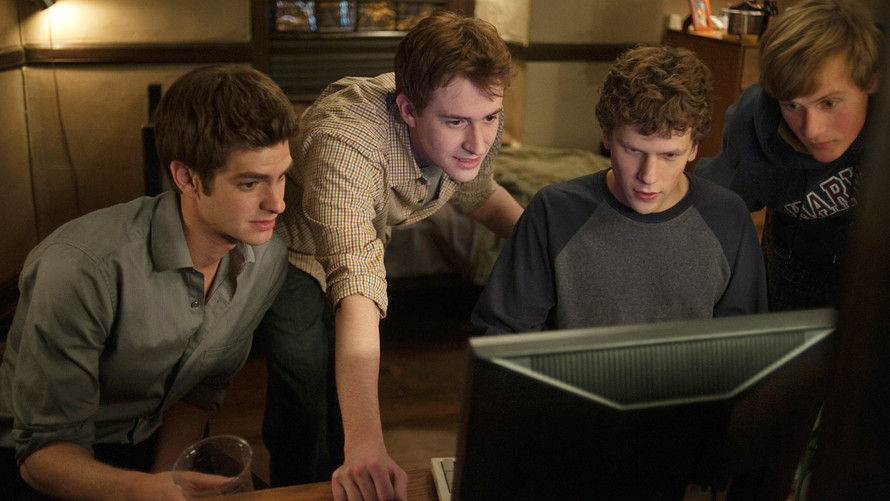 While the strategy of investing in internet-related companies will likely always be first associated with the dot-com era, the long-lived bull market has proved to be just as strong a period for a sector that has influenced nearly every aspect of the economy.

Friday marks the ninth anniversary of the financial crisis bottom, and since that period—by one measure, the start of the current bull market—internet stocks have been among the best performers on Wall Street.

According to data from Morningstar, the two top-performing exchange-traded funds since March 9, 2009, both track the internet sector, and have doubled multiple times since then. (The data excludes leveraged products, as well as funds that opened after that date.) 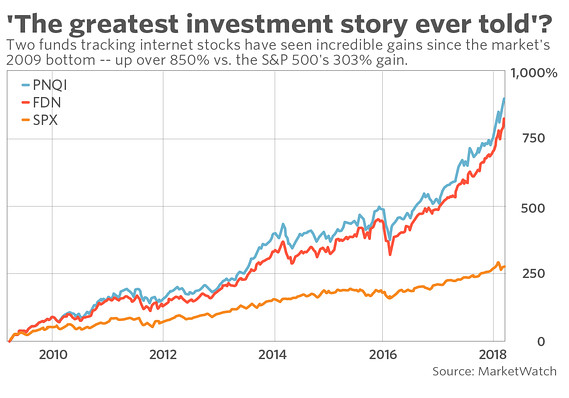 “The current tech rally is possibly the greatest investment story ever told,” wrote Vincent Deluard, global macro strategist at INTL FCStone, who was speaking about the sector broadly, and not these ETFs in particular. He noted that the MSCI World Technology Index has added $5.7 trillion in market capitalization since February 2009, “when the entire sector amounted to just $1.5 trillion.”

While both funds use a similar strategy, they track different indexes and have modestly different compositions in terms of their holdings—although those modest differences have added up over time.

The top holdings of both feature a lot of familiar names, including stocks that have been trading favorites for years, particularly in 2017, when the so-called FAANG group of stocks single-handed accounted for a sizable portion of the overall market’s advance, thanks to their blistering levels of growth. FAANG refers to a quintet of large-capitalization technology and internet stocks: Facebook (NAS:FB) , Apple (NAS:AAPL) , Amazon (NAS:AMZN) , Netflix (NAS:NFLX) , and Google parent Alphabet (NAS:GOOGL) .

Netflix, Amazon, Alphabet, and Facebook are all among the top five holdings of the PowerShares portfolio, along with Booking Holdings Inc. (NAS:BKNG)  (formerly known as Priceline.com). The four FANG names comprise more than a third of the overall portfolio by weight.

Amazon, Netflix and Facebook are the top three holdings of the First Trust ETF, together accounting for nearly a quarter of the portfolio’s weight. Salesforce.com Inc. (NYS:CRM)  and PayPal Holdings Inc. (NAS:PYPL)  round out the top five.

Other technology strategies also made up some of the top 10 ETFs since the market bottom. The iShares PHLX Semiconductor ETF (NAS:SOXX)  has surged about 675% since March 2009; it has recently benefited from interest surrounding cryptocurrencies like bitcoin (COINDESK:BTCUSD) .

The First Trust NASDAQ-100- Technology Index Fund (NAS:QTEC)  has gained about 670%; the fund holds the largest technology stocks listed on the Nasdaq-100 (AMERICAN:NDX) , and it weights them equally in the portfolio, as opposed to by their market capitalization.

A broader technology fund, the Vanguard Information Technology ETF (PSE:VGT) , is up 550% over the past nine years. Such funds don’t include Netflix or Amazon—two of the biggest gainers of the past decade—which are classified as consumer discretionary names. They have supported the Vanguard Consumer Discretionary ETF (PSE:VCR) , however; it is up 641% since 2009.

Other sectors have also done notably well over the past nine years, having provided investors with a more concentrated level of growth than the overall market. The First Trust NYSE Arca Biotechnology Index Fund (PSE:FBT)  has surged more than 700% over the period, while the iShares U.S. Aerospace & Defense ETF (BATS:ITA)  has advanced more than 650%.

Outside of sectors, some smart-beta strategies have also done notably better than the overall market. Such products use rules to tilt their portfolios to certain strategies like “value” or growth.” The Guggenheim S&P 500 Pure Value ETF (PSE:RPV) , which hold large-capitalization stocks determined to be trading at a discount, is the top-performing smart-beta product since the bottom, up 760%. A similar product from the same firm that focuses on smaller companies, the Guggenheim S&P SmallCap 600 Pure Value ETF (PSE:RZV) , also ranks among the top 10, having gained 650%.

The Guggenheim S&P 500 Equal Weight Financials ETF (PSE:RYF) , which holds financial stocks and weights them equally in the portfolio, has gained 660% since the market bottom, also placing it in the top 10.

And since the broad market has also done well, the S&P 500-tracking SPDR S&P 500 ETF Trust (PSE:SPY)  has more than quadrupled since the bottom, up more than 370%.