X
Tweet
Share this bulletin
Get news bulletins by email
Bulletin Have questions — or worries — about retirement? Here’s your chance to pose them. »
Investor Alert

The charts say hot air, and little else, is pushing these markets higher 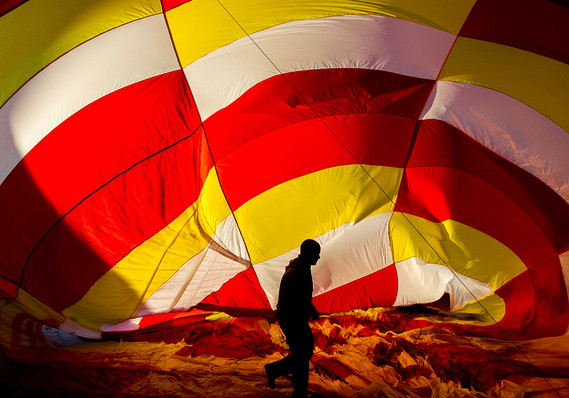 On Nov. 4 I outlined the performance issues in the broader indexes and questioned whether we were actually in a bull market. On Monday, many indices made new all-time highs and I find myself raising the same question again. Before you question my sanity, let me outline the evidence.

First, note what actually happened. On the night of the election, S&P 500 /zigman2/quotes/210599714/realtime SPX -1.16% futures actually dropped below November 2014 highs. Futures were lock limit down, and circuit breakers stopped the descent. Yet, as with Brexit, overnight magic happened and all damage was erased by the open. The markets then proceeded onto a vertical up tear, pushing small-cap futures 18% off the lows in a mere nine days. An impressive feat by any standard, but if you think these are signs of stable markets, consider my thesis: Markets have been rising on hot air, and technical charts retain heavily bearish structures despite new highs.

The most common explanation for the rally was attributed to the conciliatory tone of Donald Trump's acceptance speech. But the real driver of the rally has been based on the same element that every single major rally since the 2009 lows has been based on: Government stimulus and/or central-bank intervention.

Consider: In 2009, president Obama came into office and immediately authorized a giant stimulus package. It was labeled the American Recovery and Reinvestment Act of 2009 and ended up costing over $800 billion. Fast forward eight years later with $10 trillion in additional debt and a $4.5 trillion FOMC balance sheet and here comes president-elect Donald Trump proposing measures (tax cuts, stimulus spending and expanding the military) that would exceed even the 2009 program. As a point of highlighting the magnitude of these programs: The 2009 stimulus package alone was larger than the 50-year running budget of NASA.

Why is it hot air? Because all these measures are destined to vastly accelerate the national debt with direct benefit to the top 1% and do not bring about organic growth in the economy, exactly polar opposite to the message Mr. Trump has conveyed during his campaign. I've outlined a detailed analysis on the subject here: Empty Promises . More relevant perhaps: None of the measures have been decided, discussed or implemented yet.

But, yes, the stock market is loving the talk of new stimulus coming. It always does. Yet despite the massive recent rally, bearish structures remain in place.

Let's start with the S&P futures. The recent rally has been operating below the broken February trend line. As I outlined following the election , this is a key technical trend line to watch. The other trend line is the rising resistance line of recent highs. Note we hit both in Tuesday overnight trading: 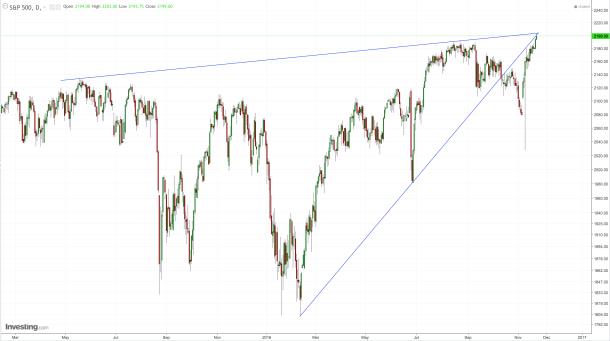 And perhaps even more pronounced, note how the SPX has completely diverged from its components above their 200-day moving averages, a very strong negative divergence vs. summer highs:

The amazingly strong Russell 2000 /zigman2/quotes/210598147/delayed RUT -1.31% had an 18% advance off the overnight lows on election night. How can that not be bullish? For the same reason the SPX is still suspect. Trend line resistance:

See the RUT broke its 2009 support trend line in 2015 and has spent all of 2016 trying to get back above it. Now the index is vastly stretched and overbought. A rejection here will bring the entire advance into question.

And broader indices such as the NYSE remain bearish in structure:

That all said, positive seasonality talk abounds, and with massive new stimulus being priced into the markets, one must be conscious of the possibility that markets can squeeze higher, and I have outlined potential technical upside targets here: America's Dirty Little Secret.

However, the bulls have one big problem in further advancing markets here and that is complacency. As perfection and a stock nirvana are priced into markets, the VIX is back to the low end of the range with multiple open gaps above:

While not all gaps fill, data history shows that all VIX gaps tend to, which strongly suggests a VIX spike to come with lower prices being part of the equation. It is how markets react then that we see how much of this advance was indeed hot air.