The coronavirus-led economic recession may be over, but the depression has barely begun 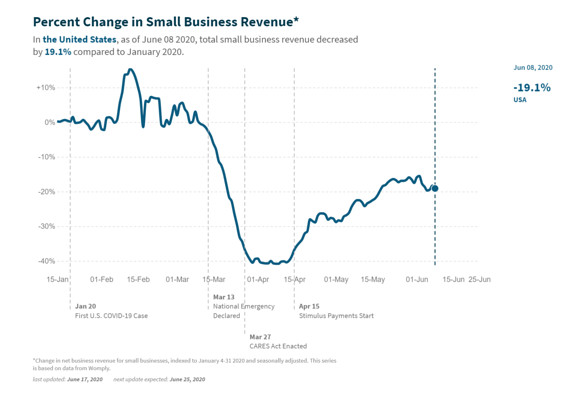 Opportunity Insights/tracktherecovery.org
Small-business revenue is down 19% from pre-COVID days, and is flat over the past month despite the heralded re-opening of the economy. Something is seriously wrong.

Now that businesses are reopening and calling back furloughed workers, the COVID-19 recession may already be over . The depression has barely begun.

The economy is growing again, but, with 2 million people filing for unemployment checks last week and about 30 million workers already on the dole , it’s still struggling mightily.

There’s no official definition of a depression. Still, today’s economy seems to be a close fit: Millions of workers are losing their jobs permanently. Thousands of small businesses are closed permanently or operating at only a fraction of profitable levels. Debts are mounting, and incomes are not growing fast enough. State and local governments are slashing jobs and services. And only massive, but temporary, federal support prevents millions of families from falling into poverty.

It’s not just that the coronavirus pandemic is reaching new heights after a bungled reopening. That was to be expected. States experiencing rapidly growing case numbers are already seeing softer growth and even economic contraction in some cases, says Aneta Markowska, chief economist at Jefferies.

Growth at small businesses has lost momentum nationally, she said.

Some policy makers agree that the reinvigorated pandemic will hurt the economy for the rest of this year.

“We’ll be in a situation where the economy is growing more slowly than we might have hoped a few months ago,” Boston Federal Reserve President Eric Rosengren said in an interview with Yahoo Finance this week. He expects the unemployment rate to remain above 10% for the rest of the year.

Some economic forecasters are beginning to agree with Rosengren and other more pessimistic voices, and are dialing back their expectations for a V-shaped recovery that would return the economy to its pre-COVID level within a year.

“Many factors point to what is more likely to be a quarter-to-quarter ‘V’ that does not have staying power, including that COVID is not vanquished, trade remains in contraction, business investment is collapsing, financial conditions are not loose, and equity markets are disconnected from the real economy, potentially contributing to uncertainty enhancing financial turbulence,” says a team of economists at Citi Research led by Catherine Mann. 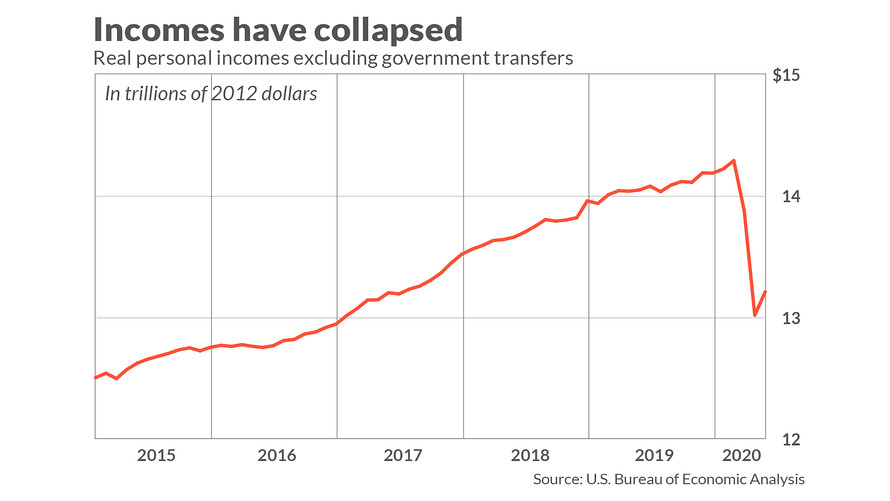 A longer-term worry is that vital parts of the economy — workers, businesses, lenders, creditors, and state and local governments — won’t get the support they need to survive financially until the virus is beaten.

Bizarrely given the election calendar, there is little urgency in Washington for another round of stimulus payments, especially among Republicans. Treasury Secretary Steven Mnuchin wants the government to send out another check to everyone before Election Day (and Donald Trump apparently agrees), but anonymous White House aides and Republican senators have quashed that idea. Democrats in the House have passed a bill, but that proposal too is dead on arrival in the Senate.

In the end, something will be done, but the fiscal response will be timid and underwhelming, as always.