The cracked benchmark? Why some investors want a new standard for bonds

The AGG’s heavy weighting toward quality is being debated

The idea and goal behind the AGG, he added, was “to come up with something that’s priced appropriately,” meaning it accurately reflects the value of its holdings, given their proportions.

‘An art, not just a science’

Unlike equity indexes like the S&P Total Market Index—which basically include all U.S. stocks, which are then weighted by their size—there’s a certain amount of finesse involved in composing the AGG.

“If an asset grew or came to market and was widely used, we would reach out to our clients via our advisory councils to get feedback and solicit thoughts,” Berkley explained. “If we were able to price them properly and they met the general rules [for inclusion], we would make an announcement, give people ample notice so no one had first-mover advantage. It’s a bit of an art, not just a science.”

The composition of the index is no inconsequential question, as it is a bellwether for fixed-income investors. According to Morningstar, there are more than 460 mutual funds that use it as their primary benchmark, accounting for a combined $1.2 trillion in assets. There are also a number of ETFs that also track the index. The largest, the $48 billion iShares Core U.S. Aggregate Bond Index /zigman2/quotes/200660887/composite AGG +0.30% , has seen more than $9.5 billion in inflows over the past 12 months.

The hundreds of billions of dollars pegged to the AGG mean that any tweaks to its construction would likely result in seismic market activity as passive funds—such as Vanguard’s $182.4 billion Total Bond Market Index Fund /zigman2/quotes/210422528/realtime VBTLX +0.30% —would have to shift its composition to mimic the index.

Adding a new category of fixed-income security “would mean greater liquidity for those securities, and better pricing discovery,” said Guggenheim’s Minerd. “You’d increase demand for the securities, and because demand is better, pricing would become more aggressive. Yields would fall generally.”

Minerd didn’t go so far as to say that the AGG should be totally revamped “for the sake of having more consistent comparisons,” but he said that there was a need for a new fixed-income benchmark “that more accurately reflects the composition of the bond market.”

Maria Giraldo, Guggenheim’s director of economic and investment research, proposed one such alternative. The biggest changes include a higher percentage of municipal bonds at the expense of agency commercial and residential mortgage-backed securities, and new or expanded positions in high-yield corporate bonds (“junk” bonds), bank loans, and asset-backed securities. 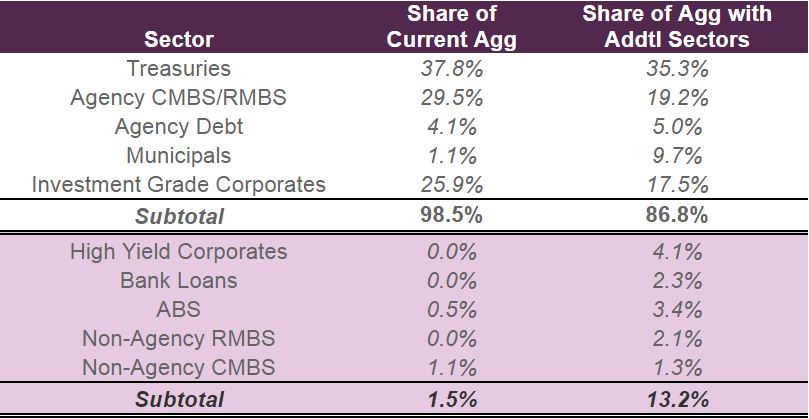 In response to the question of whether the AGG should expand its holdings, Bloomberg’s Berkley noted that high-yield securities have their own separate index, while a third, the Bloomberg Barclays Multiverse Total Return Index, includes both high-yield and investment grade issues. However, compared with the nearly 500 funds and the $1.2 trillion-plus in assets that track the traditional AGG, there are only six mutual funds (and zero ETFs) that cite the multiverse as their primary benchmark, according to Morningstar. They boast a combined size of $10.33 billion.

Karen Schenone, a fixed-income product strategist within BlackRock’s Global Fixed Income Group, also disputed the idea that the AGG was in need of a fundamental overhaul. “It accurately measures the investment-grade part of the bond market, and for most people, that is the kind of exposure they’re looking for,” she said, noting the AGG’s generally negative correlation with stocks, which increases its value as a diversification tool.

“Most institutional investors who utilize the AGG can’t invest in high-yield securities because of the risk guidelines they have to obey, so they need a benchmark that is just investment-grade,” she said.

Schenone expressed openness to expanding the already-broader multiverse index, so that it includes emerging-market debt and Treasury Inflation-Protected Securities, among other securities, and suggested it would be appropriate for the bond fund managers who invest in riskier securities to benchmark themselves against the higher-yield multiverse index, as opposed to the AGG.

“If you’re trying to pick a bond manager, and they are 20% in high yield, you should benchmark them against the universal,” she said.

One byproduct of the AGG’s construction is that active fixed-income managers may have an easier time beating the benchmark, because they’re competing against it with securities that aren’t in it. An equivalent for stocks may be an S&P 500 that excludes the technology sector, a theoretical index that growth-oriented equity managers could have an easier time generating outperformance against.

The recent market environment has favored higher-yield securities, a category the AGG is light on. Over the past 12 months, the iShares iBoxx $ High Yield Corporate Bond ETF /zigman2/quotes/204471305/composite HYG -0.07% —the most widely used ETF for “junk” bonds—is up 3.3%, near a two-year high. The equivalent fund for investment-grade bonds /zigman2/quotes/206919681/composite LQD +0.49%  is down 1.7% over the same period, while the AGG has dropped 2.4%.

According to Pimco, one of the largest bond-fund managers, more than 70% of actively managed bond funds beat their benchmark over the past seven years, compared with about 40% for equity funds. For all U.S. fixed-income funds, the outperformance by active managers was roughly 1%, according to data from Informa.

“Over the past several years you would have gotten a tailwind from being invested in higher yielding, riskier securities, but it’s important to remember that there is never a free lunch,” said Josh Barrickman, Vanguard’s head of fixed-income group indexing for the Americas. He is also the head portfolio manager on Vanguard’s Total Bond Market Index and a member of the AGG’s Index Advisory Council.

Barrickman said the Council annually debates expanding the AGG’s holdings into some of the types of securities proposed by Guggenheim. However, “it has always been pretty vanilla; it won’t delve too deeply into anything that’s a derivative of anything else. That’s why it won’t get into CLOs,” he said, referring to collateralized loan obligations.

“In an ideal world you’d have everything, but you also have to be realistic about what’s liquid,” he said. “There’s always more you can add, but it’s a trade-off. You can go down the quality spectrum, into unregistered or smaller deals. But you get to a point where the purpose of this becomes strained, the marginal benefit it adds to the portfolio lessening.”