The government is wrong: Inflation bites

If you believe the Bureau of Labor Statistics, inflation hasn't been a problem for two years.

Last month, the core Consumer Price Index grew a mere 0.1% for the second month in a row — rising at a 1.7% annual rate. Among other consequences, that's resulting in one of the smallest cost-of-living adjustments to Social Security benefits in its history.

But if you're a skeptic, of if you've bought groceries lately, you probably think this is a bunch of bunk. After all, inflation expectations as measured by the University of Michigan survey of consumers is actually turning higher and has consistently held above an annual rate of 3% in recent years. 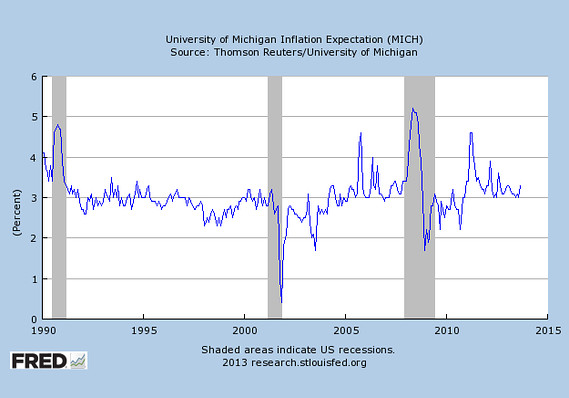 The anecdotal evidence certainly suggests prices are rising faster than the bureaucrats will admit. Gluskin Sheff economist David Rosenberg calls out the disparity between the government's call that core consumer goods are suffering mild deflation (prices down -0.1% in September on a monthly and yearly basis) and the fact the stock market has boosted stocks in the consumer-discretionary space by 34% this year — outperforming the broad market by nearly 10%.

In his words, "we are somehow in the grips of some severe loss of pricing power in this part of the economy, at least that is what the BLS are trying to convince us."

The companies in the sector are also reporting solid results, which wouldn't be expected in the demand-deficit/deflationary environment the BLS is suggesting. In the third quarter, sales per share in the S&P 500 Consumer Discretionary group are estimated to increase 16% over last year; almost 3 times the 6% rise in 2012.

The BLS says airline fare inflation has slowed to a sub-1% annual rate; yet the industry is reporting that revenue per passenger has increased 6% in the last year. The BLS says hotel-price inflation has fallen to just 1%; yet industry data shows that revenue per available room is up nearly 4% from last year. The BLS says that movie-ticket prices are nearly flat on an annual basis; yet the National Association of Theater Owners reports prices are up more than 3% over last year.

Home-furnishing retail and home-improvement retail are reporting 15%-plus annual sales growth per share. Among those with 10%-plus growth: Hotel, resorts, and cruise lines; retail apparel; automotive retail; casinos and gaming.

Well, maybe retailers are boosting sales, amid flat prices, via increased volumes. Data on growth in retail sales and personal consumption expenditures suggests otherwise. Both are posting growth rates that are at or below levels associated with the beginnings of recent recessions. 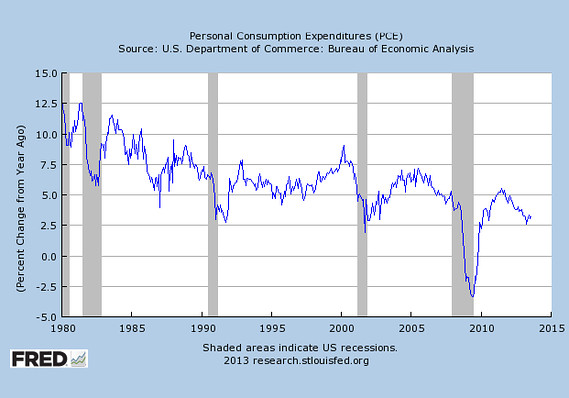 Plus, academics have warned that, in a heavily indebted society like ours, we should expect politicians to embrace a clandestine approach to higher inflation known as "financial repression" which is essentially using high inflation along with low interest rates to erode the real cost of debt (but dinging fixed-income savers in the process). Also, in the realm of global trade, we need higher inflation, low or no wage increases, and a weaker dollar to boost export competitiveness.

Both of these things seem to be happening.

Real, inflation-adjusted, short- and medium-term yields on Treasury bonds have been in negative territory since 2010. And according to research by the Boston Consulting Group, the United States is quickly closing the all-in cost of production gap with China thanks to stagnant wages here at home and an emerging low-skill labor shortage in the Middle Kingdom.

With the economy showing fresh signs of slowing, and with a $4.5 billion cut to food -tamp benefits happening Friday, this dynamic of weakening consumer spending is going to get worse. Wall Street will need to come to terms with what many families already understand: Their dollars aren't going as far as they used to.

I'm recommending clients take advantage via new short positions in stocks like Hertz (NAS:HTZ) , which has fallen below its 200-day moving average and moved into its first significant downtrend since early 2012. I've added the HTZ short to my Edge Letter Sample Portfolio .

Disclosure: Anthony has recommended HTZ short to his clients.