The housing crisis is mostly behind us. Here’s how we should manage the next one. 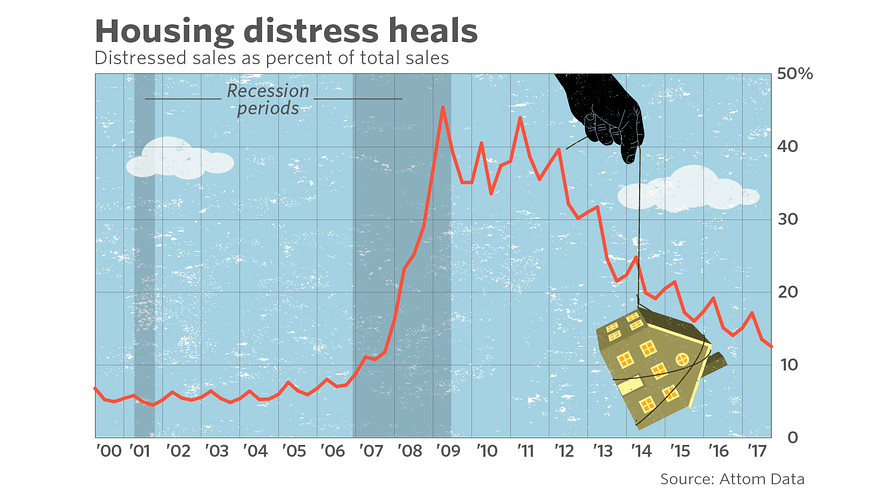 The good news: sales of distressed homes are at a 10-year low.

The not-so-good news: there’s still a ways to go before the housing market is back to normal.

And here’s some silver-lining news: the once-in-a-generation housing crisis the U.S. has just endured may offer some lessons for dealing with future outbreaks of homeowner distress.

Bank-owned sales, foreclosure auctions, and short sales made up 12.5% of all sales in the third quarter, according to a report out Thursday from real estate data provider Attom Data Solutions.

But before the housing crisis spiraled out of control, the share of distressed sales was typically in the single digits. Attom Vice President Daren Blomquist expects to see those levels again nationwide by the end of 2018.

Some local markets where prices have fully recovered from the downturn are already enjoying levels that low, Blomquist told MarketWatch. And now that we’re past the subprime crisis and Great Recession, homeowner distress should go back to being a discrete, local trend that’s the exception rather than the rule, he said.

Blomquist has said before that the housing crisis was especially cruel to the homeowners who ran into trouble: most lost substantial amounts of home equity and wound up with black marks on their credit if they were forced into some kind of distressed sale during the crisis, only to see their homes recover their values only a few years later.

And now, as many local housing markets heat up, lifting prices to fresh all-time highs, many of those one-time owners may not be able to afford a way back into the market, he said.

For Blomquist, those experiences shape the most important lesson he thinks should be learned from the crisis: “find ways to help those distressed homeowners stick it out and not go through foreclosure,” he said.

“There was a sense that it was financially smart to cut their losses and just walk away, but in many areas of the country we’ve seen home prices exceed their pre-recession peaks. If they could have just stuck it out they would have built wealth.”

Blomquist’s other takeaways from the crisis? Making foreclosure auctions more transparent and more widely-marketed to a broader audience would likely result in higher-dollar sales that would be better for lenders, homeowners, and communities, he thinks. And streamlining and encouraging short sales could also help stave off foreclosures.

At a conference in Washington Wednesday, officials from Freddie Mac (OTC:FMCC)   and Fannie Mae (OTC:FNMA)  , the two mortgage finance companies that back most of the mortgages originated in the U.S., agreed that the housing industry should take away lessons learned from the recent crisis.

The innovation and technology that’s being harnessed to make applying for a mortgage easier and more up-to-date should also be applied to servicing distressed mortgages, they said. “This is the time to make sure we don’t lose what we learned,” said Dave Lowman, Freddie’s head of single-family business.