Financially fragile Americans during COVID-19 have difficulty answering these 15 money questions — can you?

A new survey asked who could cover unexpected expenses during the pandemic’s early days. 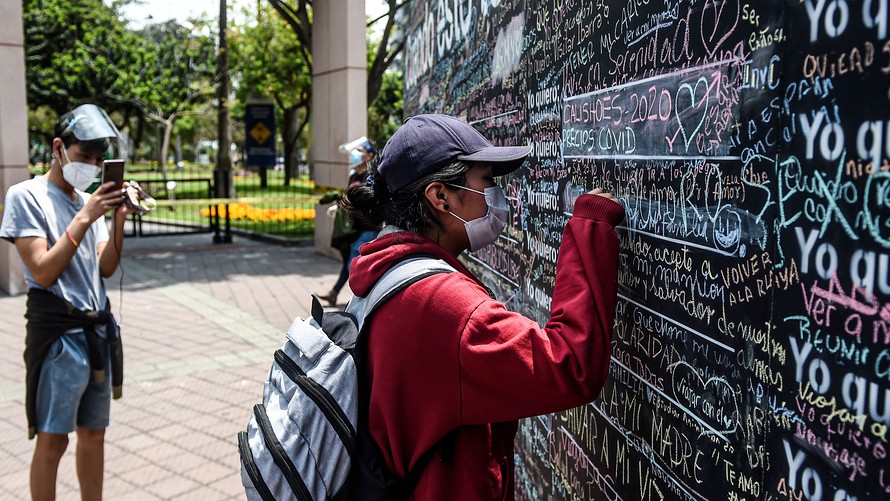 AFP via Getty Images
Every correct answer reduced a person’s chance at being deemed “fragile” in the money matters, researchers discovered.

The more someone understood about interest rates, inflation, risk diversification and other financial concepts, the less likely they show signs of financial “fragility” at a time of serious money pressures for many people across the country, a new study concludes.

There is a link between financial literacy and financial resilience, according to Olivia Mitchell of University of Pennsylvania’s Wharton School, Annamaria Lusardi of George Washington University’s School of Business, and Robert Clark of North Carolina State University’s Poole College of Management.

At the beginning of the first coronavirus surge in March, 40% of households making under $40,000 per year lost the jobs they had one month earlier. In April, the jobless rate soared to 14.7% and $1,200 direct checks and supplemental $600 federal-unemployment benefits from the $2.2 trillion started rolling out.

Against this backdrop, the researchers asked who could come up with $2,000 for an unexpected emergency within the next month. Overall, 18.9% said they certainly couldn’t, or probably couldn’t do that, which the researchers said made them “financially fragile.”

“In other words, even with the promise of substantial government payments, about 1 in 5 older respondents reported they could not handle a mid-sized unexpected expense,” the researchers said, noting that women, Black and Hispanic participants were all more likely to be in this group.

(This outsized economic effect has been show in various places.)

Here’s where they noticed the literacy link: The so-called “fragile” survey participants correctly answered about half of the three questions about how interest rates are calculated, inflation and risk. People in better money condition answered almost all three (2.5 on average) correctly.

1. Suppose you had $100 in a savings account and the interest rate was 2% per year. After 5 years, how much do you think you would have in the account if you left the money to grow?

D. Do not know

2. Imagine that the interest rate on your savings account was 1% per year and inflation was 2% per year. After 1 year, how much would you be able to buy with the money in this account?

A. More than today

B. Exactly the same

D. Do not know

3. Please tell me whether this statement is true or false. “Buying a single company’s stock usually provides a safer return than a stock mutual fund.”

C. Do not know

(Answers at the end of article.)

1. Suppose you had $100 in a savings account and the interest rate was 2% per year. After 5 years, how much do you think you would have in the account if you left the money to grow ?

2. Imagine that the interest rate on your savings account was 1% per year and inflation was 2% per year. After 1 year, how much would you be able to buy with the money in this account?

A. More than today

B. Exactly the same

3. Please tell me whether this statement is true or false. “Buying a single company’s stock usually provides a safer return than a stock mutual fund.”

4. Suppose you owe $1,000 on a loan and the interest rate you are charged is 20% per year compounded annually. If you didn’t pay anything off, at this interest rate, how many years would it take for the amount you owe to double?

A. Less than 2 years

B. At least 2 years but less than 5 years

A. The car repair

B. The carpeting replacement

C. There is no way to tell in advance

7. Which statement is true? Alex has a low credit score. This means that:

A. He has a history of late payments and carrying balances on his credit cards

B. He can get a low interest rate on loans and credit cards

C. He can get a low premium on car and homeowner’s insurances

8. Susan worries about living a long life and running out of money. How could she manage that possibility?

A. There is nothing she can do about this

9. Jesse is a retired worker. Which statement is correct about Jesse’s Social Security?

A. Jesse’s monthly Social Security benefits will be the same no matter how old he was when he started to receive them

B. Social Security will pay Jesse a benefit sufficient to maintain his pre-retirement living standard

C. Social Security will pay a benefit to Jesse until he dies

10. Chuck plays the lottery, spending $50 per month on tickets. Which statement is correct?

A. This is a good strategy to accumulate wealth

B. To accumulate wealth, Chuck should save the money each month rather than buy lottery tickets

C. It is a good strategy if Chuck has a good system to pick numbers

11. Bill and Mary own a house which they would like to sell to move to a smaller place. Which statement about selling the house is correct?

A. Bill and Mary must pay off their existing mortgage before they can put their old house on the market.

B. Bill and Mary cannot get a new mortgage unless they get back their purchase price.

12. Suppose Andy purchases an appliance that retails for $1,000 with equal monthly payments of $100 per month for 12 months. The total payments Andy made by the year’s end total $1,200. What is the interest rate that Andy paid for this purchase?

C. Not enough information to calculate the interest rate on his purchase

(Answers at the end of article.)

“A person with three correct answers is 6.3 percentage points less likely to report being unable to cover a $2,000 unexpected expense compared to a person who answered none of the three questions correctly,” the researchers wrote. In the 12-question index, every right answer reduced the chance of financial fragility by one percentage point, they said.

The same trend played out when researchers asked extra questions about annuities, compound interest, credit scores and other money matters. The more financially prepared correctly answered on average 8.5 of the 12 question, versus 6.3 for the financially fragile.

People with a better understanding of money were already making better spending and saving decisions ahead of the pandemic, when many household budgets were put to the test, “and this still holds true after controlling on socio-demographic characteristics, including education and income,” the authors said.

Less than half of Americas’s 50 states require a personal-finance course. As of this year, 21 states require high-school students to take a personal-finance course, up from 17 in 2018, according to th e Council for Economic Education , an organization focused on K-12 financial education. Half of U.S. states mandate a high-school economics course, up from 22 in 2018.

Despite the increase in mandated financial education, other studies ahead of the pandemic have suggested that Americans’ grasp on financial literacy is slipping.

Compared to 2009, more people across various age groups couldn’t correctly answer basic questions on topics like mortgage rates, financial risk, and inflation, according to the FINRA Investor Education Foundation, the educational arm of the nonprofit organization regulating the brokerage industry.

Of course, financial savvy can’t solidify someone’s finances if they face dim job prospects during a global pandemic. There are many people who are just trying to stay in financial “survival mode” right now which could affect they handle money matters now. Some financial literacy proponents note the limits on financial instruction.

Monday’s study noted that drawback too, but emphasized the value in financial education in the broader school system. “Of course, financial education cannot erase deep socioeconomic inequalities overnight,” they wrote, “but it can equip people with the knowledge to better deal with economic shocks, and plan for the future.”