There’s one new addition in the court, and outside it, to take into account. 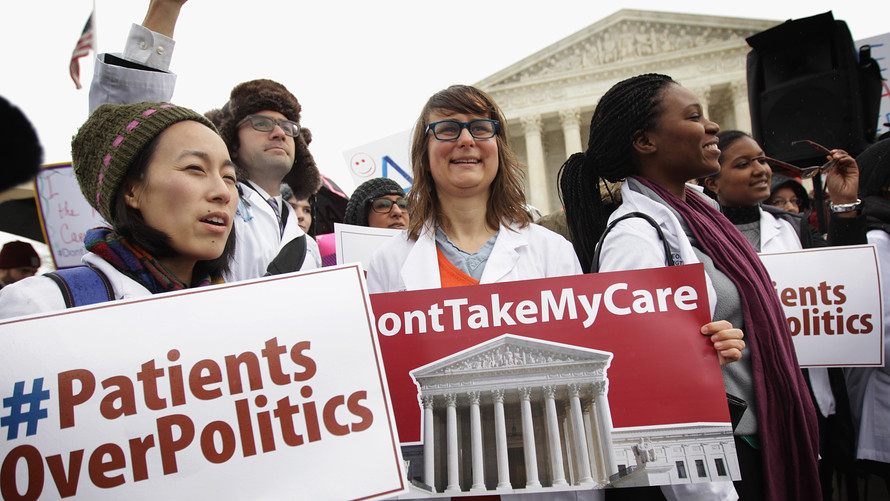 Nine U.S. Supreme Court justices have the fate of health insurance coverage for approximately 20 million Americans in their hands.

The Trump administration and 18 Republican-leaning states argue the whole law must go. After federal lawmakers in 2017 zeroed out the individual mandate’s penalty for lacking health insurance, the entire Affordable Care Act (ACA) must fall with it, they contend.

Now it’s a question of which side can convince at least five members of the high court that they have the better arguments, an issue that has new resonance as the coronavirus pandemic continues to surge. More than 10.1 million Americans had contracted COVID-19 as of Tuesday, according to a running tally from Johns Hopkins University.

The Supreme Court case, Texas v. California, is about health care. But it’s also about math.

There’s the addition of Justice Amy Coney Barrett, a conservative-leaning judge who replaces Justice Ruth Bader Ginsburg, a member of the court’s liberal wing who died in September at age 87.

Then there’s the addition of President-Elect Joe Biden, a proponent of the health-care law who is poised to take office in January as the court mulls its decision, which is expected for release in spring 2021.

Biden, who was vice president when President Barack Obama enacted the law in 2010, can’t stop the court from deciding the case once he takes office, legal observers say. But with court permission, his administration can pivot and argue the law should be upheld.

Biden was scheduled to speak later Tuesday on the lawsuit, according to his transition team.

Prior to the passage of Obamacare, health insurers could deny coverage, limit payouts or charge higher premiums to people with pre-existing medical conditions. If the Supreme Court were to eliminate the Affordable Care Act, those protections would likely go away.

That substraction could bring some more costly additions, some researchers say. The pandemic may have already added on approximately 3.4 million adults under age 65 who caught COVID-19 to the ranks of Americans with a pre-existing condition, according to the Commonwealth Fund , a private foundation offering grants and analysis on health care matters.

Before the pandemic’s onset, America had up to 133 million people with one or more pre-existing condition, Commonwealth Fund researchers said.

(On the campaign trail, Trump and Vice President Mike Pence said pre-existing conditions would be protected, but critics have said the GOP plans and protections were short on details.)

How will Justice Barrett affect the case decision?

Democrats have warned that Barrett’s nomination to the court could mean the end of the Affordable Care Act. Barrett has written in the past criticizing Chief Justice John Robert’s decision in the 2012 case, even going so far as to say that the legislation should be called “SCOTUScare.”

But Republican lawmakers said Barrett’s position on the case is unknown. And Barrett said during her confirmation hearings that she made no promises to anyone in exchange for her nomination.

“I have not made any commitments or deals or anything like that,” she said at the hearings. “I am not here on a mission to destroy the Affordable Care Act. I’m just here to apply the law and adhere to the rule of law.”