The biggest winners from the crisis

NEW YORK (MarketWatch) — The fall of the House of Lehman occurred two years ago, marking the last, desperate phase of the financial crisis that almost undid the world economy.

Now, as the dust clears, some winners and losers have emerged. And we may eventually look back on the crisis as an inflection point when some countries leaped ahead, while others fell behind.

So far, the emerging markets of Asia and Latin America have been the big winners, along with some of the Nordic countries. Their economies are booming while their stock markets have surged.

The winners were countries that improved their competitiveness without getting too deeply into debt.

The big losers, of course, were the countries along the European periphery and others that got stretched too thin, living off the false hopes of the credit boom of the 2000s.

“The controlling idea here is debt,” says Nicholas Vardy, who writes the Global Stock Investor and Global Guru investment newsletters from London. “In the very big picture, a lot of the growth from western Europe and U.S. has been from debt. Now, the shoe is on the other foot.”

Indeed it is. Although some developed markets have emerged unscathed from the crisis, the emerging markets — especially those just below the BRICs (Brazil, Russia, India, and China) — have been among the biggest winners.

Here are my picks of the biggest winners since the fall of Lehman Brothers, based on stock market performance, gross domestic product growth, and intangible factors, such as relative change in economic and political status. (My choice of losers will follow next week.)

1.Singapore. Singapore, the tiny city-state south of China with a population of less than four million, will see gross domestic product growth of an astonishing 15% this year, economists predict. A surge of exports has set the pace, while tourism — spurred by the opening of the city-state’s first two Macau/Las Vegas-style casinos this year — has also picked up. As Vardy points out:

“Singapore has been ranked [number one] in global innovation and competitiveness. It’s ranked first for having the most open economy for international trade and investment.”

Its stock market is the strongest among all developed markets, up 21.57% over the last year, and it has risen at a 12.7% annual clip since the fall of Lehman. Read more about Singapore on MoneyShow.com. 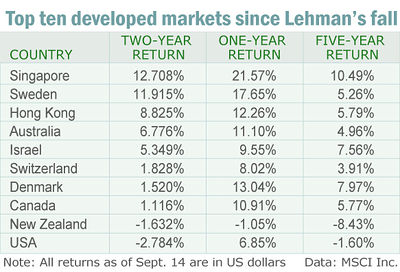 2.Malaysia and Indonesia. Malaysia, which expelled Singapore in 1965, has also prospered. Its population of 27 million is about half Malay Muslims, with large communities of people of Chinese and Indian descent. Having installed capital controls during the Asian crisis of the 1990s (and blaming speculators like George Soros for a run on the ringgit), the country refused aid from the International Monetary Fund. Eventually GDP growth returned, and economists predict it will hit 6.5% this year. Malaysian stocks have risen 36% over the last 12 months and have clocked a nearly 25% annual return over the last two years.

Nearby Indonesia has been the star of emerging Asia. The vast archipelago of more than 17,000 islands has the world’s fourth largest population (248 million) and the largest Muslim population. A “can-do” government, led by a former general, President Susilo Bambang Yudhoyono, has crusaded against corruption and begun to upgrade the country’s backward infrastructure.

3.Emerging Latin America. Once the land of Pablo Escobar and the “cocaine cowboys,” Colombia finally won a decades-long guerilla war and the drug trade moved north to Mexico. Rich in natural resources and with an industrious population of 44 million, Colombia’s economy has taken off — GDP could rise by 5% for 2010. Its stock market has been simply the world’s best — up 61% in the past 12 months and 36% annually over the last two years. It also has been the top performer over the last ten years, rising 38.6% annually. No lost decade there!

Copper-rich Peru and conservative Chile, which has one of the freest economies in Latin America, also posted some amazing stock market returns over the last two years. Both Peru and Chile have little government debt. Their markets have outpaced Brazil’s, which also must be viewed as one of the big winners.