Prices may fall even more in coming weeks, but production cuts could set stage for big rebound: Goldman Sachs 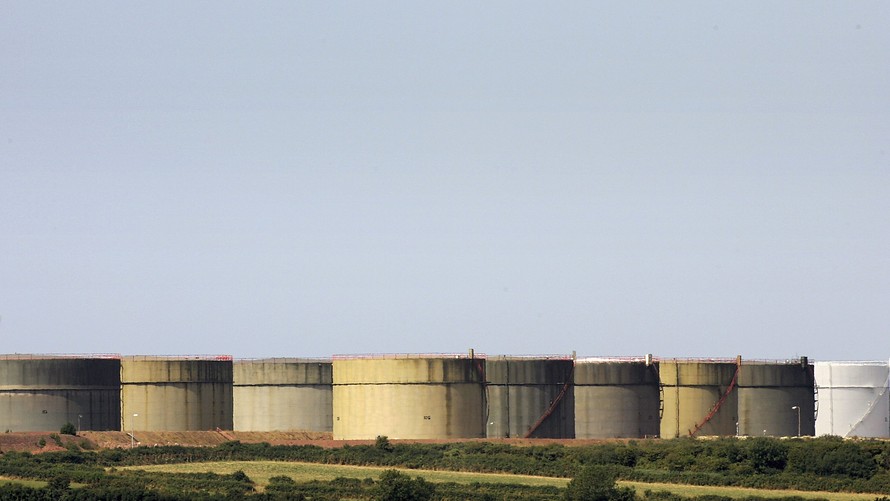 A fast-rising tide of crude oil — courtesy of a plunge in demand due to the global COVID-19 pandemic and an ill-timed price war between Russia and Saudi Arabia — is filling up storage tanks around the world and putting a strain on the global refining system.

IHS Markit estimated in a Thursday report that the global oil market is headed for a first-half 2020 surplus of 1.8 billion barrels, exceeding the top end of the advisory firm’s estimate of available crude-oil storage capacity of 1.6 billion barrels.

“Production is going to have to be reduced or even shut in. It is now a matter of where and by how much,” said Jim Burkhard, head of oil markets at the firm.

IHS Markit illustrated the situation in the chart below, which shows how many days of storage remains available in major producing countries. 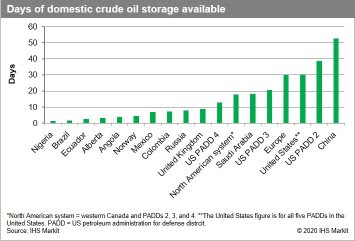 The main driver for the surplus comes from the unprecedented collapse in global demand as major economies curtail activity on a massive scale in an effort to slow the spread of COVID-19.

Oil prices have plunged, with West Texas Intermediate crude (NYM:CL.1) , the U.S. benchmark, down more than 48% in the month to date after hitting a more-than-17-year low. Brent crude (IFEU:UK:BRN.1) , the global benchmark, is off more than 41% this month.

International Energy Agency head Fatih Birol on Thursday told an online forum that with the pandemic shutting in around 3 billion people around the world, crude-oil demand was set to plunge by 20 million barrels a day in the first half of 2020, according to news reports. 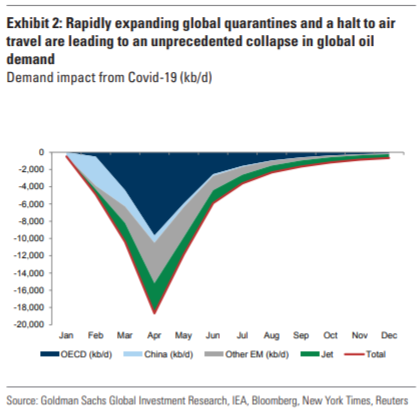 “Such a collapse in demand will be an unprecedented shock for the global refining system, with margins simply not low enough given the required level of run cuts,” the Goldman analysts wrote.

“This is the point at which crude prices will fall below cash-costs to reflect producers having to shut-in production. While seaborne crudes like Brent can remain near $20/bbl in 2Q, many inland crude benchmarks where saturation will prove binding are likely to fall much further (U.S., Canada, Russia, China),” they said.

While available storage could help underpin West Texas Intermediate crude in the near term, the flood of oil will likely take it “well below” $20 a barrel, where many regional U.S. crude prices are already trading, Goldman predicted.

Meanwhile, the potential shutting-in of several million barrels a day of production could have long-term consequences, since shut-ins can permanently damage oil reservoirs and wells. Once global economic activity returns to normal, the stage could be set for a violent rebound down the road that could be much sharper than Goldman’s “base case” for Brent to rally back to $40 a barrel in the fourth quarter, they said, which means the recovery could also be accompanied by an inflationary shock.