‘We are weary’: Life in Italy, one year after national lockdown to stop the spread of COVID-19 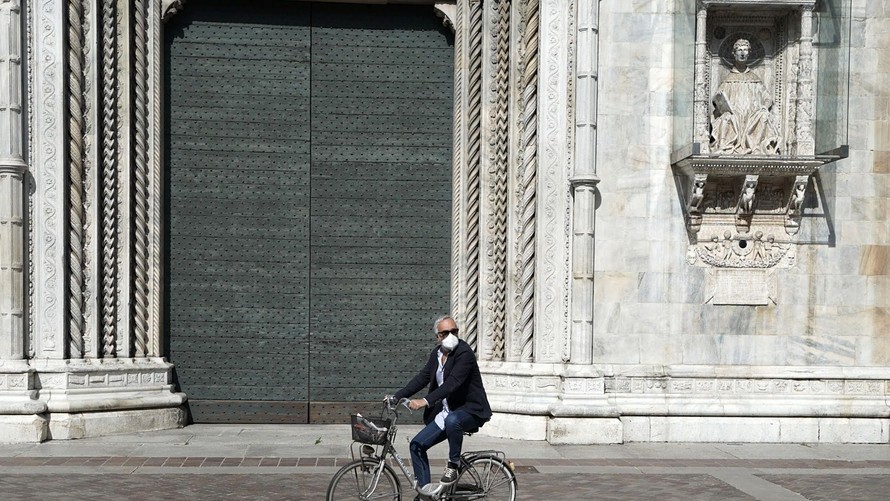 Getty Images
‘The presence of increased police patrols in a crowded square in Como on a recent Saturday evening is further evidence of a developing social malaise that needs to be kept in check,’ writes Alison Fottrell. Pictured: a man cycles in the main square in Como, Italy.

COMO, Italy — As Maestro Vanni Moretto walks across the stage, the only sound that can be heard is the echo of his footsteps as he takes center position in front of his orchestra. He turns to face the 858 empty seats of the Teatro Verdi in Pisa and awkwardly inclines his head , first left and then right, acknowledging an audience that cannot be seen. There is haunting silence from the vacant space of the stalls and platea. Removing his mask, he signals the start of the symphony, and the music begins.

Twelve months after Italy initiated its first lockdown, following clusters of COVID-19 infections in the industrial regions of the north, Milanese composer, orchestra conductor and violonista Vanni Moretto sums up the situation in one word — tristezza . It is indeed a gloomy state of affairs that theaters remain shut as we enter the second year of the pandemic. Minister for Cultural Heritage Dario Franchesini initially had high hopes for the ongoing streaming of live events, but his proposal of a ‘Netflix of Culture’ was considered by many in the industry as pura follia or “utter madness.”

“We’re weary at this point, and demotivated,” says Moretto, “The initial enthusiasm to reinvent our work through streaming has slowed down. You simply can’t perform a symphony of Shostakovich, for example, to an empty theater. That momento magico of the first note, in front of a live audience, has been stripped from the orchestra and spectators alike. It’s disheartening.”

‘That momento magico of the first note, in front of a live audience, has been stripped from the orchestra and spectators alike.’

Almost a year to the day when cinemas, theaters and museums were first closed to the public, La Scala in Milan, the Teatro Sociale in Como along with many others across the country lit up their buildings in an attempt to highlight the plight of an industry that feels left in the dark. The initiative also served as a plea to leaders to give some thought to the health of our souls where, as Gandhi had said, “a nation’s culture resides.”

Government officials, however, have had other things on their mind. Former Prime Minister Giuseppe Conte felt the need to resign following disputes over how to allocate the €209 billion ($249 billion) he had secured from Europe, which was 28% of the entire European Union rescue fund. President Sergio Mattarella has since put his faith in ex-European Central Bank chief Mario Draghi to help the country out of its political and economic crisis.

As of Saturday, over 3.2 million Italians have tested positive for COVID-19 and 101,881 people have died from the coronavirus, the sixth highest number of deaths per country since the pandemic began.

Prime Minister Draghi’s new government was sworn in last month, in what he called a “difficult moment for Italy.” Not only does he plan to beat the pandemic, complete the vaccinations, solve the citizens problems and rebuild the country, but his agenda is also green . On this front, the pandemic will inevitably help out given that many of us are now clued up on the efficiency of online meetings instead of taking a plane to meet the boss in Naples or Rome.

It may not, however, bode well for the world of culture that the appointed Undersecretary for Cultural Heritage, Lucia Borgonzoni, has claimed not to have read a book for pleasure in years. Priorities, perhaps, remain elsewhere as the pandemic continues to pervade the territory. Experts predict that the English variant will be the predominant one by mid-March, while health official Silvio Brusaferro is optimistic that the Brazilian and South African strains can still be contained.

Minister for Health Roberto Speranza is also hopeful, despite delays with deliveries of vaccinations. Talks have commenced on the eventual production of a vaccine in Italy, with a projected time frame of four to six months. Authorities had expected to achieve herd immunity by this summer and then move into the final phase of shots in the last quarter of 2021, but according to a weekly index published by the Hume Foundation, we would need to be vaccinating at four times the current rate for that to happen.

Alison Fottrell: ‘Authorities had expected to achieve herd immunity by this summer and then move into the final phase of shots in the last quarter of 2021, but according to a weekly index published by the Hume Foundation, we would need to be vaccinating at four times the current rate for that to happen.’

To speed things along, the Ministry of Health has given the green light to the possibility of skipping the vaccine booster for those who have recently had the virus. This is based on the assumption that such people have developed a certain immunity. It is clear that all options are being examined so there can be a relaxation of the restrictions that continue to determine our everyday existence. Lombardy in the north is still the region with the highest number of COVID-19 cases, with an oscillating infection rate that now stands at 6.7%.

As a result, restaurants and bars continue to close at 6.00 p.m. The national curfew of 10.00 p.m., which has been in force since November 2020, still applies. This is the time that shutters come down, and streets for the most part fall silent until 5.00 a.m. when it lifts.

For there to be no curfew, we would have to have fewer than 50 COVID-19 cases per 100,000 inhabitants in the region, which is what the government would label a ‘white’ zone. In fact, each part of Italy is periodically assigned a color — the lighter the shade, the fewer the cases.

Although this idea of color coding is to avoid a nationwide lockdown like the one that happened on March 9, 2020 and give some areas respite from the intensity of government measures, living with the uncertainty can be unsettling. It’s like Rudyard Kipling’s Kaa comes to life every two weeks to weave his optical spell, turning us from red to orange to yellow and back to a deeper orange again. That’s the number of colors Como has been since the beginning of the year. It is enough to make your head spin.

‘It’s like Rudyard Kipling’s Kaa comes to life every two weeks to weave his optical spell, turning us from red to orange to yellow and back to a deeper orange again.’

And heads are not the only things that are starting to, as the Italians would say, girare . People are getting frustrated. Over the past year, relatives have passed, funerals have been missed and people are generally zoomed out. Whether COVID-positive or not, the physical isolation is real. And for young people, it’s particularly destabilizing. The constant threat of turning red looms large, and they are under immense psychological pressure the longer this goes on.

According to Stefano Vicari, head of Child and Adolescent Neuropsychiatry at Bambino Gesù in Rome, the number of incidences of self-harm and attempted suicides in those between the ages of 12 to 18 has markedly gone up, particularly since the second wave of the pandemic in October 2020. The presence of increased police patrols in a crowded square in Como on a recent Saturday evening is further evidence of a developing social malaise that needs to be kept in check. Street fighting had broken out between local youths, and similar scenes have also been witnessed in Milan.

With the latest regional color change, high-school students here in Como are back to their computer screens full time, having only just returned to the classroom on alternate weeks. The longer their virtual tuition goes on, the higher the drop-out rate, with the economically disadvantaged most at risk. And just as there are those who can’t wait to get back to normal, there are others who have become accustomed to online interaction, and actually fear returning to their former routine.

Back in the Teatro Verdi of Pisa, the show, as it must, goes on. “Damage has been done, the extent to which we still can’t understand, but over time I think we’ll see that it’s significant,” reiterates Maestro Vanni Moretto. He conducts his orchestra in a rising crescendo of strings, horns and oboes before signaling the end of the symphony. He turns again to face the empty silence of the theater and to acknowledge a faceless crowd. Swinging back to his musicians, he goes through the motions of closing the concert and calls on them to take a bow. He quickly leaves. There is, as Moretto’s concert and curtain call demonstrated, a sense of both hope and unease.

One year after our national lockdown, life here in Italy is neither normal nor new.

This essay is part of a MarketWatch series, ‘Dispatches from a Pandemic.’ 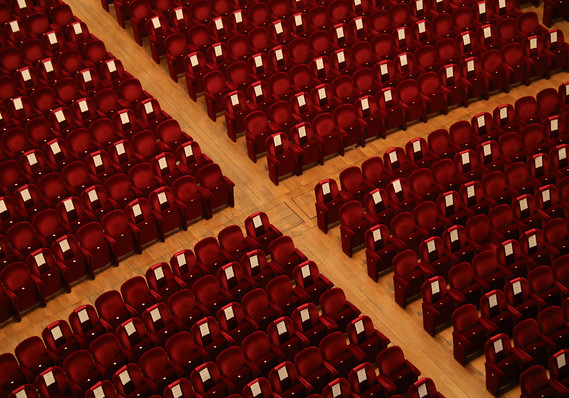 Photo by Vittorio Zunino Celotto/Getty Images
‘Minister for Cultural Heritage Dario Franchesini initially had high hopes for the ongoing streaming of live events, but his proposal of a ‘Netflix of Culture’ was considered by many in the industry as pura follia or “utter madness.” Pictured: Seats with signs due to social distancing at the Teatro Alla Scala in Milan, Italy.