From jobs to child care: How this second surge in COVID-19 can damage your finances — as well as your health 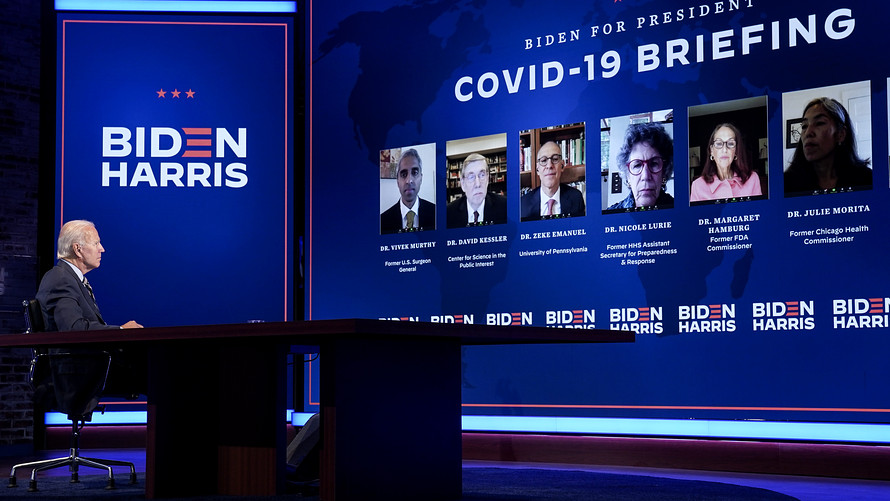 Getty Images
President-elect Joe Biden has a plan to tackle COVID-19 when he takes office next year.

A growing number of people are finding it tough to afford enough food, pay for typical household goods and stay current on their rent and mortgage compared to five weeks prior, according to running statistics from the U.S. Census Bureau.

Meanwhile, time is running out on government-enacted financial relief for struggling households and payment pauses on debts such as student loan balances. Capitol Hill talks for another stimulus bill are stalling, just like the transition between President Donald Trump and President-Elect Joe Biden.

In other words, the surge in coronavirus cases couldn’t have come at a worse time for Americans’ financial well-being, on top of the implications for their physical health. President-elect Joe Biden said he has a plan to tackle COVID-19 when he takes office next year.

‘Things are getting much worse, but policymakers aren’t in action mode and they barely make time to talk to one another now.’

Andrew Stettner, a senior fellow at the liberal-leaning Century Foundation.

“Things are getting much worse, but policymakers aren’t in action mode and they barely make time to talk to one another now,” said Andrew Stettner, a senior fellow at the liberal-leaning Century Foundation.

Twelve million Americans will have their unemployment benefits drop to $0 a day after Christmas, according to his research on gig workers and others who are close to exhausting their benefits.

As of Tuesday, there were 12.4 million coronavirus cases in the U.S. and 257,701 deaths, according to Johns Hopkins University. Public health officials have been ringing alarms on rising COVID-19 case numbers as winter nears, even as vaccines with promising results move closer to government approval.

Here’s look at the various ways the latest surge imperils finances at this precarious point.

Holding on to jobs and unemployment benefits

The economy added 638,000 jobs and the jobless rate dropped to 6.9% in October. But even on the heels of a surprisingly strong jobs report, some economists said there were “red lights” ahead in November if rising coronavirus cases crimped re-hiring or forced more shutdown orders.

Minnesota imposed a four-week shutdown order on bars, restaurants and gyms starting Nov. 20 and Philadelphia is taking a similar step. Initial jobless claims in the week ending Nov. 14 were up for the first time in more than a month. The 742,000 claims beat the 710,000 claims predicted by economists talking to MarketWatch.

That matters because pots of supplemental unemployment insurance money are running out, if they haven’t already. There was the $600-a-week supplemental federal unemployment benefit, which was authorized by the $2.2 trillion CARES act in March. That ended in July. Then there was an additional $300/week reallocated from a Federal Emergency Management Agency disaster fund, which ended in early fall.

Now there’s the Dec. 31 official close of the CARES act’s Pandemic Unemployment Assistance, which applies to gig workers, freelancers and the self-employed. There could be a collective $226 billion drop when that money source ends, according to some projections.

In early November, 8.5% of polled Americans told the U.S. Census Bureau they were either behind on their rent or mortgage, or they had little or no confidence they could make that payment on time next month. That number had crept up from 7.2% in late August.

The share of people behind on housing payments has inched up even while a U.S. Centers for Disease Control and Prevention moratorium on evictions is in effect through Dec. 31. Housing advocates say the moratorium has exceptions and ways to put tenants out in the cold, or crammed into other places with too many others.

Don’t miss: The messy, legally murky eviction of a North Carolina single mother — despite the CDC’s moratorium: ‘Nobody’s enforcing it’

After Biden becomes president, the National Housing Law Project said “a broader and true eviction moratorium is essential to control the spread of coronavirus, protect poor tenants, and give families stability through this crisis.”

Putting food on the table

Over 50 million people — including 17 million children — could experience food insecurity this year, according to Feeding America , a nonprofit network of food banks and pantries across the country.

Census figures show more people saying they haven’t had enough to eat in the past seven days. It was 8.5% of survey participants in early November, compared to 7.2% in late August.

Read: ‘There is always a need for food assistance’: 10 ways you can help people this Thanksgiving

If you are struggling to pay for food right now, start by seeing whether you’re eligible for the Supplemental Nutrition Assistance Program (SNAP), the country’s major food safety-net program, formerly known as food stamps. SNAP provides benefits through an electronic benefits transfer (EBT) card, which you can use to purchase groceries at an approved retail store.

Apply for SNAP in the state where you live, as different states have their own application forms and processes; eligibility is based on criteria including income and resource limits.

During the pandemic, as SNAP offices have struggled with increased demand, the application process and rules have been streamlined, said Ellen Vollinger, the legal director for the nonprofit Food Research & Action Center (FRAC). “People mostly are applying remotely, and if they’re approved, they’re getting a higher benefit than they normally would get,” she added.

Here’s the thing: a federal paid leave law specially designed so people can take paid time off work is coming to a close on Dec. 31. The Families First Coronavirus Response Act applies to covered workers who need paid time for their own sick leave, time to care for others or a child stuck at home with a closed school.

Like the eviction moratorium, advocates say the leave laws, and the span of other state and local leave laws, don’t go far enough.

Approximately 30% of all American workers are shielded by state and local laws guarding against family responsibility discrimination, according to a report released Wednesday by the University of California, Hastings College of the Law’s Center for WorkLife Law.

“Bias against workers because of their family caregiving responsibilities was widespread long before the pandemic. The Covid-19 crisis has drastically magnified the problem,” the researchers wrote.