This chart paints a discouraging picture of the stock market today 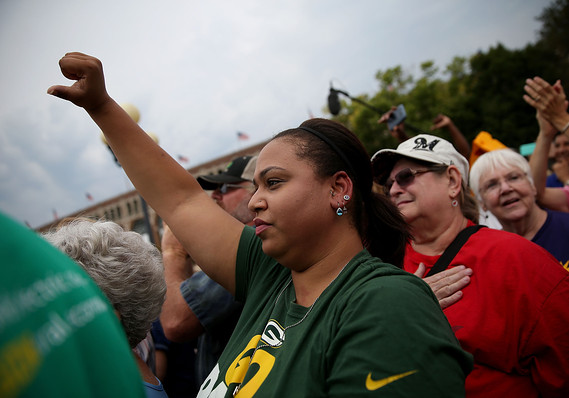 Have you ever been driving down the road and felt something strange that made you think there might be a problem with your car? Most of us have. Imagine taking your car in to a mechanic who listens to you describe the problem, tells you it's no big deal, and then sends you on your way before even glancing at the vehicle, let alone starting it up or taking it out for an investigative test drive. This might seem absurd, but many investors jump to similar conclusions when it comes to the stock market. They take a peek at their portfolio or the stock market, and as long as it's going up, they assume everything is fine without any further examination.

The S&P 500 is up more than 15% since the Feb. 11 intraday lows, and if investors aren't careful, they're going to get caught sleeping. Not that I'm predicting a market crash because my job is not to predict what the market is going to do tomorrow, but to observe the current conditions of the market and maintain the correct level of risk, as determined by the current market landscape.

In either case, markets take time to crash, when in fact they do crash. As such, it's easy for investors to become complacent when they see the market go up. They think, "My financial adviser said to stick with it and that it'll always come back, and by golly, it did." Of course, markets do come back ... eventually. But this assumption ignores the possibility that the current bear market isn't finished clawing money out of the hands of investors.

When I look at the market in the chart below, I see three things:

A. The market has continued its rise as of late

B. It is doing so on overbought and negative-trending momentum

C. It has done so on weakening volume. 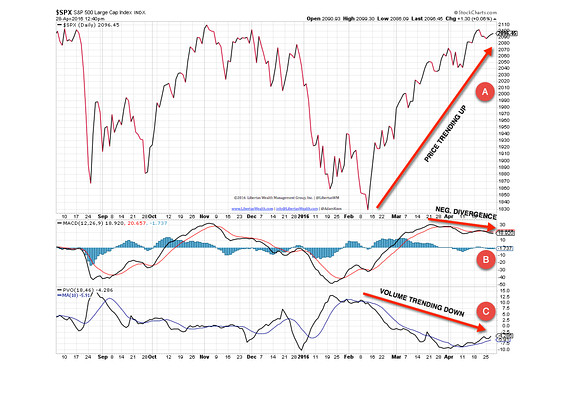 In a healthy, northward trending market, we would see momentum indicators — such as the moving-average convergence/divergence (MACD) at "A" — trending up along with the market. Instead what we see here is negative divergence with momentum pointing southward, against the trend. This unfavorable signal against the grain of prevailing market prices indicates probable near-term trouble for the market.

Additionally, in a strong market, we would see robust volume accompanying the up-trend. Instead, what we see here is a Price Volume Oscillator (at "C") telling us that, from February through early April, volume actually receded while the market forged ahead. It is important to avoid confusing this action as being resilient . Again, stable volume that tags along with a trend indicates strength of the trend in place, and observing the chart above, it seems to me that momentum is shifting negative all while volume is starting to pick up some steam.

Human beings suffer from a serious case of recency bias, which results in investors quickly forgetting the pain once felt when markets drop. It took almost two years (from 2007-2009) for the market to ransack investors of more than 50% of their wealth. In 2008, there were exactly the same number of positive trading days as there were negative ones, but still the market fell 37%. People kept saying, "The bottom has to be behind us at this point," but it wasn't.

Today we look in the rear-view mirror at a 15% market rebound off the Feb. 11 lows, led primarily by laggard energy, materials and metals stocks. A good portion of this rebound has been carried by large caps, and since the S&P 500 is a cap-weighted index, of course "the market" is going to look good when the largest of the 500 stocks are pulling all the weight while an abundance of middle and small-sized companies remain in the shadows, marinating in bear market territory.

When markets get mature, the small caps go first and then the mid caps fall as investors flee to "blue chips" for safety and dividends. But when the large caps roll over and there aren't as many buyers remaining to buy the shares you're selling, all of a sudden things go parabolic. At least, that is what's at risk today if you look at nothing more than the value of your portfolio today and then walk away.