Economists looked at the spending and saving habits of more than 1,600 people who received their stimulus check by April 21 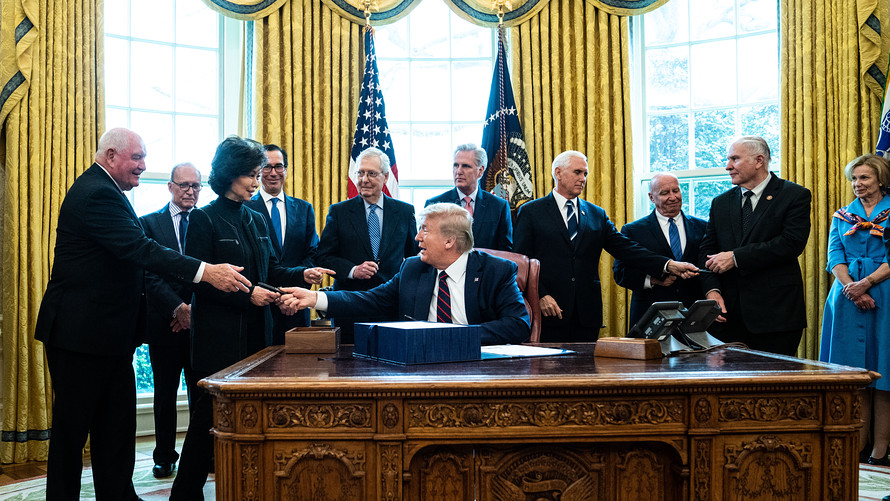 When Americans received stimulus checks during the Great Recession, studies indicated many spent at least of portion of their money on cars.

During the 2008 stimulus program, up to 90% of the rise in durable good spending had to do with auto spending, according to previous research by the American Economic Association. (At that time, the government paid an individual between $300 and $600 and couples received between $600 and $1,200. The government paid $300 per child as well.)

When Americans received their $1,200 stimulus check, as many have used it to keep a roof over their head and food on the table, according to new research by a team of economists. In late March, lawmakers passed the $2.2 trillion CARES Act, which included $290 billion in direct payments. The program allowed $1,200 for people making less than $75,000 and couples making less than $150,000. It also paid $500 per child.

‘Given the size of the 2020 stimulus checks, we might have expected large impacts on categories like automobile spending, electronics, appliances, and home furnishings.’

“Given the size of the 2020 stimulus checks, we might have expected large impacts on categories like automobile spending, electronics, appliances, and home furnishings,” according to economists at Columbia University, Northwestern University, the University of Chicago and the University of Southern Denmark.

“Instead, it seems that individuals are catching up with rent and bill payments as well as engaging in spending on food, personal care, and nondurables.”

Looking at the spending and saving habits of more than 1,600 people who received their stimulus check by April 21 in an approximate 6,000-person sample, the researchers found:

• In the first three days after the stimulus-check receipt, spending increased between $50 to $75 apiece on expenditures like food and non-durable goods, a category that includes supplies like laundry detergent, pens, paper and other items with a shorter life span.

• During that same time, the purchase of durable goods increased by $20 in those first three days. This category includes cars, appliances, furniture and others things meant for longer use.

• On the whole, households spent around one quarter to one third of their stimulus check money within 10 days of receipt.

See also: Do I have to pay back my $1,200 stimulus check? Don’t fall for these 5 myths about the stimulus payments

• If people had less than $500 in their account, they went through almost half of their money within 10 days. People with over $3,000 in their accounts had essentially no extra spending after getting their check.

• A person who made less than $1,000 a month was twice as likely to spend money after getting their check, compared to someone making at least $5,000, researchers noted. That fits a historical pattern from past stimulus programs, the study said.

In the wake of stimulus bills during 2008 and 2001, “households with either larger declines in net worth or households with lower levels of assets also tend to respond more strongly to stimulus checks.”

It’s too soon to see what the stimulus checks accomplish for families and the economy as a whole, Columbia Business School Professor R. A. Farrokhnia, the study’s co-author, told MarketWatch. “What we can tell for fact is consumer behavior is different,” compared to their 2008 stimulus spending habits.

‘Household spending on food delivery was one category in particular that increased following the receipt of a stimulus check.’

Researchers looked at anonymous data from users at SaverLife, a financial-technology company that incentivizes savings through things like cash rewards.

Farrokhnia noted many have been hit hard in the past two months, but didn’t necessarily find it alarming that more money was going to food, rent, bill and nondurables compared to durable goods. After all, he noted, a family might not want a stranger coming in to install a new washing machine or they might not have a reason to buy a new car with fewer places to visit.

Farrokhnia and his fellow authors wrote that many outlets for consumer spending were shuttered by government orders, but restaurants stayed open for pickups and deliveries. “Household spending on food delivery was one category in particular that increased following the receipt of a stimulus check,” the study said.

Time will tell how people use all their stimulus money, Farrokhnia said, noting the spending trailed off 10 days from receipt; many people might be holding onto the rest to see what the future holds, he added. However, he does wonder whether these $1,200 checks will be enough “to spur consumer spending to fuel economic recovery.”

Don’t miss: ‘It removes the concerns of the immediate future.’ How some people are planning to spend their stimulus checks

The study, distributed this week by the National Bureau of Economic Research, is another look at how the coronavirus outbreak and its economic consequences suddenly left many American families cash strapped — especially those making lower incomes.

On Wednesday, Federal Reserve Chairman Jerome Powell said 40% of people in households making less than $40,000 per year in February lost their jobs in March. When April’s rent came due, nearly one-third of renters struggled to pay it, data said.

The Internal Revenue Service has distributed more than 128 million checks and paid over $218 billion as of early May.

The new study comes as lawmakers debate another bill addressing the outbreak’s economic repercussions. The Democrat-backed $3 trillion HEROES act would, among other things, authorize another round of $1,200 direct payments per eligible individual. Payouts would be capped at $6,000 per household.

Senator Mitch McConnell, the Republican majority leader, is already brushing off the bill, calling it “the aspirations of the Democratic majority in the House.”