Even if you get to keep your health insurance, you could pay the price 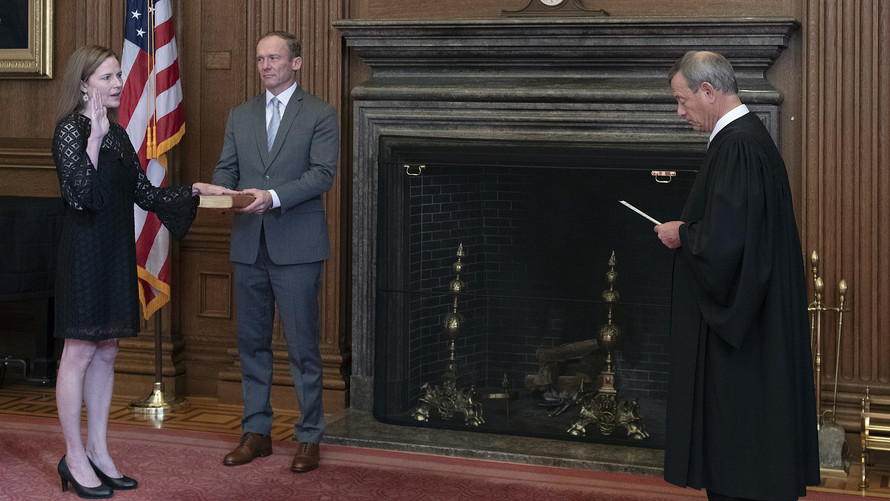 Supreme Court/Getty Images
Chief Justice John G. Roberts, Jr., swears in Judge Amy Coney Barrett in October. The Supreme Court is scheduled to hear oral arguments Nov. 10 from the Trump administration and a group of Republican attorneys general who are asking that the entire law be thrown out.

If the Supreme Court throws out the Affordable Care Act, your finances and your future could pay the price.

Retiring early or starting a business might become too hazardous if your access to health insurance isn’t guaranteed. You might have to wait a year before pre-existing conditions are covered by an employer’s plan. Young adults could be kicked off their parents’ policies. Millions of people who buy insurance through the ACA marketplaces or who now qualify for Medicaid could lose their coverage as well.

Even if you were able to keep your health insurance, you could face caps on your coverage that expose you to enormous medical bills. Preventive care and birth control could cost you more. Medicare beneficiaries could face higher premiums, deductibles and copays. Insurers could cancel your policy retroactively for even minor mistakes on your application.

In the decade since the ACA became law, many Americans have become so accustomed to the protections and savings afforded by the landmark legislation that they may not realize how much could change if Obamacare is struck down. Its effects on health care are so pervasive that nearly every American could be affected, according to the Kaiser Family Foundation, which tracks health care issues.

The return of pre-existing conditions

The Trump administration and a group of Republican attorneys general have asked that the entire law be thrown out. The Supreme Court is scheduled to hear oral arguments on Nov. 10.

Back then, many people who had health issues — or whose family members did — avoided changing jobs, starting businesses or  retiring early  because of the risk they couldn’t find affordable health insurance.

President Trump signed an executive order in September announcing “a steadfast commitment to always protecting individuals with pre-existing conditions,” but the order alone can’t force insurers to offer coverage if the ACA is struck down.

See: Obamacare had made middle-aged Americans healthier before COVID-19 struck

And America is a land of pre-existing conditions. Half of adults under age 65, or up to 133 million people, had health issues that could cause them to be denied coverage or charged exorbitant premiums, according to a 2017 government analysis.

‘Use it and lose it’ coverage

Health insurance  is meant to help people pay their medical expenses and avoid potentially catastrophic bills. Before Obamacare, however, using your insurance could cause you to lose it.

Also see: The Affordable Care Act is more popular now than when Obama was president

If someone with an individual insurance policy got sick, the insurer could scour the person’s application looking for errors. Even minor mistakes could cause the company to revoke the policy, a practice called rescission. Under the ACA, rescissions are allowed only if there’s fraud or a material misrepresentation of facts.

Policies also routinely had caps that limited how much insurers had to pay out over someone’s lifetime. People who were sick enough could hit those caps and be on the hook for 100% of their medical costs afterward.

Other potential side effects

Millions could become uninsured if the  ACA exchanges  are shut down, expanded Medicaid coverage is rescinded and insurers are no longer required to cover children under 26 on their parents’ plans. Some employers may continue dependent coverage, since young people in general tend to use less health care. But young people in poor health or with pre-existing conditions could be shut out.

Don’t miss: Your guide to Medicare open enrollment: How to shop, switch, and compare plans

Without the ACA, insurers could once again charge copayments or coinsurance for preventive care, including screenings, immunizations, annual checkups and birth control. Medicare beneficiaries could once again have to pay for certain services, including screenings for breast cancer, colorectal cancer, cardiovascular disease and diabetes. The law also closed the infamous “doughnut hole” in Medicare’s prescription drug coverage that left many older people paying thousands of dollars out of pocket for their medication.

Ending Obamacare could increase Medicare beneficiaries’ costs in other ways. The ACA reduced payments to medical providers and private insurers. Reversing that could lead to higher deductibles and copays for Part A, which covers hospital visits, and higher premiums and deductibles for Part B, which covers doctor visits and other outpatient care.

On the other hand, fewer high-income beneficiaries would face premium surcharges if Obamacare went away. Private Medicare Advantage plans could reduce costs and improve coverage. A 0.9 percentage point increase in the payroll tax on higher-income workers also would be repealed.

Then again, increased Medicare spending and reduced revenues will deplete the system’s trust fund faster. The current insolvency date, with the ACA in place, is 2028; after that point, Medicare’s revenues won’t be enough to cover all of its promised benefits.

You may not have thought America’s health care system could get any more dysfunctional. If Obamacare goes away, prepare to be unpleasantly surprised.