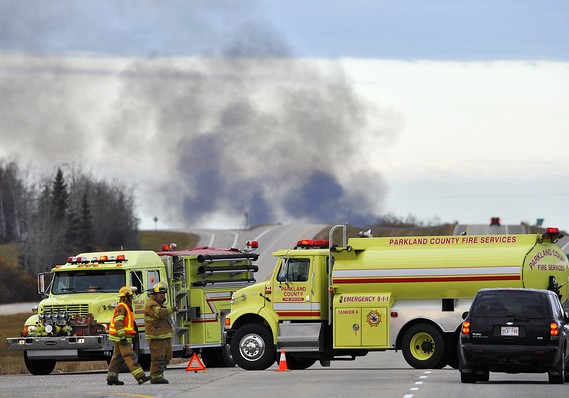 Enlarge Image
Smoke rises in the distance as firefighters block a highway leading to an area where a train carrying crude oil and liquefied petroleum gas derailed in the small town of Gainford, Alberta west of Edmonton, on Saturday. The accident caused an explosion and fire, but no injuries, the Canadian National Railway said.

“None of the crude oil units are compromised at this time. No injuries were sustained from the incident,” according to the statement.

Fire crews were on site and a voluntary evacuation of residents in the vicinity has been completed, the county said. The accident occurred near Gainford, Alberta, about 200 miles north of Calgary. Traffic on Highway 16 has also been rerouted at least for the next 24 hours, the authorities said.

In July, an unattended train carrying crude oil derailed and exploded in Quebec. The blast flattened parts of the nearby town of Lac-Mégantic and killed 47 people. The operator of the train, Montreal, Maine, & Atlantic, filed for bankruptcy protection in both Canada and the U.S. a month after the incident. Montreal Maine & Atlantic is owned by Rail World Inc., a Chicago-area railway management company specializing in privatization and restructuring.

Separately, a natural gas pipeline ruptured on Friday about 90 miles west of Fort McMurray, Alberta, according to the Transportation Safety Board of Canada. The agency has deployed an investigator to the site to gather information. Fort McMurray is roughly 300 miles northeast of Gainford.

Sue Chang is a MarketWatch editor in San Francisco. You can follow her on Twitter at @SueChangMW.