While working at his first job as an emerging-markets analyst for Arnhold and S. Bleichroeder, Barish observed that investors expected quick profits as developing countries embraced American-style capitalism after socialism's demise. "But I got to see how the sausages were made," he says. "Education systems needed improvement, the phones didn't work when it rained and courts couldn't enforce contracts. It taught me to be sensitive to valuation and skeptical of big overreaching theses that ignore details."

Barish's exemplary record at Cambiar Investors, a firm located just outside Denver, suggests that he's learned his lessons well. Following a bottom-up approach that eschews macro themes, the no-load $272 million Cambiar Opportunity /zigman2/quotes/209711246/realtime CAMOX -0.39% Fund (ticker: CAMOX) has posted an annualized return of 12.78% since its inception in mid-1998, versus just 2.12% for the Standard & Poor's 500. Over the past five years, the fund's 7.56% annualized return places it in the top 1% of large-cap core offerings.

"It's been exceptionally consistent," notes Kerry O'Boyle, an analyst with Morningstar, the Chicago-based fund-research firm. Indeed, Opportunity Fund has never ranked below Morningstar's 11th percentile in any year. 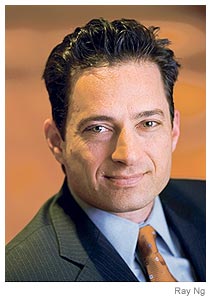 "We try to exploit the market's general myopia," says Barish, who in 1997 moved back to Denver to join the company founded by his father, Michael, 24 years earlier. "Even good businesses in predictable industries can disappoint, but that creates opportunity if there's a catalyst for improvement that investors don't recognize," he says. Not that Barish thinks Mr. Market is wrong very often. "There aren't 200 large-cap companies that are simultaneously misvalued," he says. "But there might be a handful, and that's all we need."

Which might explain the fund's focused portfolio, consisting of only 40 stocks chosen on the basis of mostly traditional relative-value criteria. Says Barish: "We're looking for strong franchises that are trading near the bottom of their historical valuation ranges because of what we consider to be temporary factors."

For instance, the fund bought HCA (HCA) in 2003 after its stock had crashed from 51 to 28, in part because of a billing scandal at another hospital company, Tenet Healthcare /zigman2/quotes/207964487/composite THC -1.43% (THC). At the time, HCA earnings also were being hurt by an unusually weak flu season. "There was guilt by association and a transitory problem," observes Barish. After riding HCA into the mid-40s by early 2004, Barish trimmed his position, just before the stock hit the skids again over concerns about collectibles. Sensing that the problem was related to the tepid job market and encouraged by the company's share-buyback plan, Barish bought more last fall around 36. Since then, HCA has been on a rampage, soaring to over 55. "We've traded it rather well," Barish says proudly, "and recently, we've started to let a little go."

Such "position management" tactics are not unusual for the fund. "One of the things that people forget in the wake of a 20-year bull market is a sell discipline," Barish explains. In the bull market, "every time you sold something, it just kept going up and you felt like an idiot. But those days are over."

While Cambiar Opportunity Fund didn't escape the New Economy meltdown without some serious bear scratches (it dropped 16.2% in 2002), Barish thinks that a relative-value strategy can salve the wounds. "We don't invest in speculative businesses or those with stretched balance sheets," he says. "Our preference is for companies that seem to have limited downside."

Barish has numbers to support that assertion. Cambiar's Institutional Tax-Exempt Equity Composite earned about a 3% annual return (before fees) during the five worst years for U.S. stocks since 1975. Over the same period, the S&P 500 lost an average of 11%. Notably, 2002 is the only year in which the firm's equity portfolios lost money. Roughly 90% of Cambiar's $2.9 billion under management is in separate accounts.

Chris Curwen, an international equity salesman at Lehman Brothers who worked with Barish at Bear Stearns in the early 1990s, recalls a "prolific analyst with a unique ability to boil down complicated issues into clear and concise investment theses."

An accomplished poker player, Barish says his card-playing father taught him "that if you have a strong hand, you'll probably win if you stay with it." So "if you think you know something that the market doesn't, you need to bet hard."

Clearly, Barish thinks there's much the market doesn't know about the beaten-down health-care group, which accounted for 20.3% of fund assets as of March 31, versus 12.8% for the S&P 500. He recently initiated a position in Pfizer /zigman2/quotes/202877789/composite PFE -0.90% (PFE), despite his view that its days as a growth stock are history. Although the FDA subsequently complicated Pfizer's reorganization efforts by ordering its Bextra pain drug off the market, Barish thinks the stock, now in the mid-20s, could easily hit the mid-30s: "All the negatives are fully expressed in the stock price. It's just too cheap for what it is."

Barish also likes Wyeth (WYE), which has been dogged by legal fallout from its diet drug fen-phen, which it pulled from the market after being linked to heart damage. "The key question is whether you can put a number on an issue," Barish contends. "In the case of Wyeth's fen-phen liabilities, we think it's a little over $2 billion. The market has something closer to $10 billion or $20 billion baked into the valuation." Barish began buying Wyeth in late 2003 in the high 30s and averaged down at 34 in July. Recently, the stock was changing hands around 42.

Opportunity Fund's largest holding -- Altria /zigman2/quotes/208895754/composite MO -1.01% (MO), whose products include cigarettes -- also has connections to health, albeit not of the positive variety. "I don't smoke, and I don't recommend anyone smoke," Barish says. But Altria's Philip Morris unit, he adds, "sells a product that is legal and whose risks are disclosed." It is on that last point that Barish thinks investors become unduly scared each time a mega-lawsuit is filed claiming the company is responsible for a smoker's illness. "Outside of a small number of jurisdictions, it is very challenging to get a jury to believe that the act of lighting up 10 cigarettes a day for years is somehow involuntary."

The fund has owned Altria at various times, taking positions when sentiment turned apocalyptic -- and taking profits as the mood brightened. Barish says Altria got "stupid cheap" in early 2003 after a class-action was filed alleging that consumers were duped into thinking that the company's "lite" cigarettes were healthier than the traditional variety. With investors fearing the worst, the stock sank to $32, and Barish bought. Altria, currently trading around double that price, is now the fund's biggest holding (see table).

Table: At a Glance

Opportunity Fund's buy-and-sell decisions are reached by majority vote at thrice-weekly meetings between Barish and firm analysts. The fund's expense ratio, at 1.37%, is slightly above the category average of 1.23%, although Barish expects that number to decline to around 1.2% this year as fund assets continue to grow. Sector allocations are capped at 25% by cost, a policy that Barish believes provides another line of defense against chasing the investment flavor of the day.

In that regard, the firm thinks investors should take a deep breath before piling into the red-hot energy group. "We don't see oil prices going back to the 20s or even the low 30s, but anything over $55 represents a lot of speculation," says Michael Gardner, Cambiar's energy analyst.

The fund's largest energy holding is BJ Services (BJS), a conservatively managed cash cow whose pressure-pumping technologies square nicely with Gardner's secular forecast of increased drilling in unconventional formations. The firm has two other retail products, its Cambiar International Equity Fund /zigman2/quotes/210498402/realtime CAMIX -1.02% (CAMIX) and Cambiar Conquistador Fund /zigman2/quotes/208899958/realtime CAMSX -1.13% (CAMSX), each run according to the same relative-value philosophy. It's an approach that has Barish feeling happily out of synch with the Denver investment community, long noted for its high-octane growth style. "Nobody else in town's doing what we're doing," he says.

Judging from his performance record, that's certainly not a bad thing.

THOMAS D. SALER is a free-lance writer based in Madison, Wis.
E-mail comments to editors@barrons.com
/zigman2/quotes/209711246/realtime