DHS, created after the 2001 terror attacks and primarily on guard against threats from abroad, has during the Trump presidency focused on carrying out the president’s immigration agenda

PORTLAND, Ore. (AP) — Protesters who have clashed with authorities in the Pacific Northwest are not just confronting local police. Some are also facing off against federal officers whose presence reflects President Donald Trump’s decision to make cracking down on “violent mayhem” a federal priority.

The Department of Homeland Security has deployed officers in tactical gear from around the country, and from more than a half-dozen federal law-enforcement agencies and departments, to Portland, Ore., as part of a surge aimed at what a senior official said were people taking advantage of demonstrations over the police killing of George Floyd to engage in violence and vandalism.

“Once we surged federal law-enforcement officers to Portland, the agitators quickly got the message,” said the official, speaking on condition of anonymity to discuss an ongoing operation.

The deployment represents somewhat of a departure for DHS, which was created after the Sept. 11, 2001, attacks and is primarily focused on threats from abroad and border security. During the Trump presidency, its focus has been largely on carrying out the president’s tough immigration agenda. Now it is in the role of supporting Trump’s law-and-order campaign, raising questions about whether it is overstepping the duties of local law enforcement.

Portland Deputy Police Chief Chris Davis said his department did not request the assistance and did not coordinate efforts with the federal government during often clashes that have ranged across several downtown blocks after midnight for weeks.

“I don’t have authority to order federal officers to do things,” Davis said. “It does complicate things for us.”

The DHS officers’ presence comes at a tense moment for Portland. After Floyd’s death, the city for days saw marches and rallies that attracted more than 10,000 generally peaceful Black Lives Matter protesters to the downtown area. The police took a “mostly hands-off approach” to those events because they were orderly, Davis said. 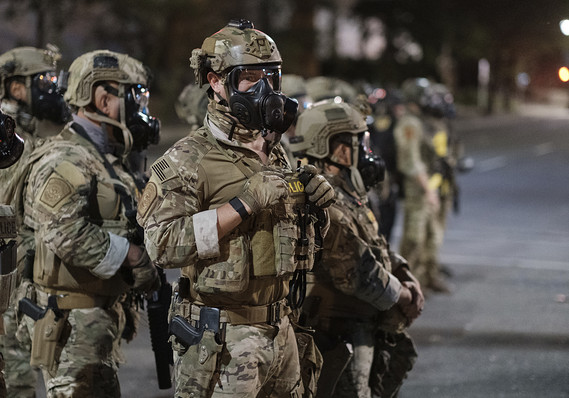 Trump, speaking at a military base near Miami on Friday, said Portland officials failed to adequately respond to the protests. “It was out of control,” he said to acting DHS Secretary Chad Wolf. “The locals couldn’t handle it and you people are handling it very nicely.”

Civil-liberties advocates and activists have accused federal authorities of overstepping their jurisdiction and excessive use of crowd-control measures, including using tear gas and patrolling beyond the boundaries of federal property. Portland police are prohibited from using tear gas under a recent temporary court order unless they declare a riot.

“DHS should go back to investigating the rise of white supremacist activity and actors who are seeking to cause violence against these peaceful protests, that is under the purview of the agency’s mission,” said Andrea Flores, the deputy director of immigration policy at the American Civil Liberties Union, who was a DHS official during the Obama administration.

Trump issued an executive order on June 26 to protect monuments after protesters tried to remove or destroy statues of people considered racist, including a failed attempt to pull down one of Andrew Jackson near the White House.

The president has denounced the Black Lives Matter movement and protests calling for the removal of statues honoring racist figures, associating peaceful protests with the sporadic outbursts of vandalism and looting at some demonstrations. He referred to “the violent mayhem we have seen in the streets of cities that are run by liberal Democrats,” as well as the “merciless campaign to wipe out our history,” in his July 3 Mount Rushmore speech.

Following the executive order, DHS created the Protecting American Communities Task Force and sent officers from Customs and Border Protection and other agencies to Washington, D.C.; Seattle; and Portland. Others were ready to deploy elsewhere if needed.