Temperatures in Tulsa have reached the 90s, and the Trump faithful are camped in an area with hardly a spot of shade 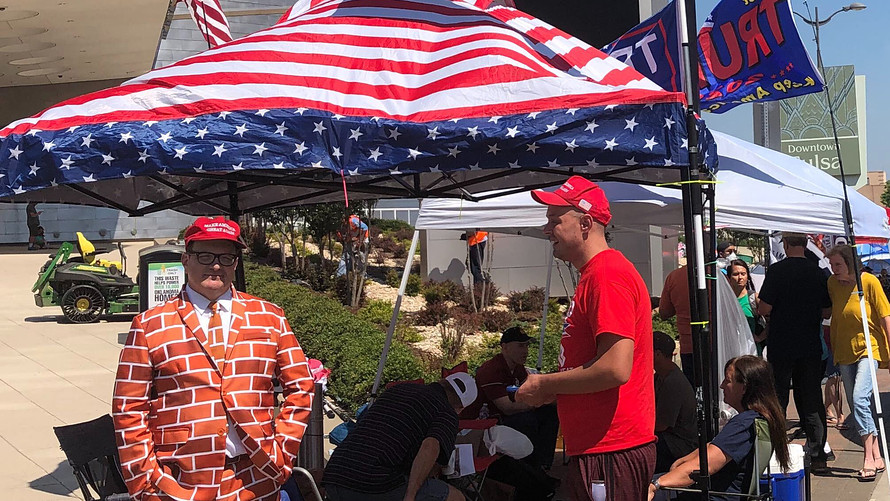 Associated Press
Trump supporters, including a man dressed in a suit representing a border wall even as the mercury hits 90° in Tulsa, line up outside outside the BOK Center arena on Thursday, two days ahead of the first Trump rally since early March.

TULSA, Okla. (AP) — Rick Frazier drove more than 750 miles from Ohio to be one of the first campers in line for President Donald Trump’s first rally in months, undeterred by a days-long wait in searing heat, the growing risk of the coronavirus in Oklahoma or a lukewarm reception from local officials.

The 64-year-old is among scores of supporters who have brought their vans, tents, campers and Trump flags to the parking lots and sidewalks outside the 19,000-seat BOK Center, and who say what matters most is being there to see the president take the stage on Saturday — and to be sure he knows they have his back.

“The big thing is to go in and support the president,” said Frazier, who arrived Tuesday for what will be his 21st Trump rally. Frazier said he feels safe, noting he and other campers are using hand sanitizer to prevent spread of COVID-19.

Tulsa’s mayor, G.T. Bynum, declared a civil emergency and set a curfew for the area around the BOK Center ahead of the rally Saturday night.

The state supreme on Friday afternoon rejected a last-ditch appeal to require that rally attendees adhere to CDC guidelines on face masks and social distancing. The Tulsa lawyer who brought the suit, according to the newspaper Tulsa World , said the goal was to limit the risk to local public health.

The court said the Tulsa residents who had asked that the thousands expected at the rally be required to take the precautions couldn’t establish that they had a clear legal right to the relief sought. In a concurring opinion, two justices wrote that the state’s reopening plan is “permissive, suggestive and discretionary.”

A local convenience-store chain has reportedly opted to close over concerns for employee health and safety rather than seek to capitalize on the influx of prospective shoppers.

The president issued this crackdown threat on Twitter to would-be demonstrators, even as campaign representative Marc Lotter was telling MSNBC that peaceful exercise of the First Amendment right to protest is welcome :

Trump rallies are known for an atmosphere akin to a political tailgate party and have always drawn diehard fans who often travel from event to event and sleep outside for days to secure a spot and pass time. Some are self-described “front-row Joes.” The groups gathering in Tulsa are taking that loyalty to a new level, though some called the coronavirus threat “an exaggeration.”

Temperatures in Tulsa have reached the 90s, and the Trump faithful are camped in an area with hardly a spot of shade. While Trump said Thursday he picked Oklahoma partly because “you’ve done so well with the COVID,” the city has seen record numbers of new coronavirus cases this week, and Tulsa Health Department Director Bruce Dart has pushed for a postponement of the event.

Trump said there had been “tremendous requests for tickets” and that there will be “a crowd like I guess nobody has seen before,” creating the kind of packed, indoor space that scientists say heighten the virus’s spread as compared with outdoor gatherings.

His rallies typically include a lot of shouting and chanting, and attendees often travel from long distances, prompting fears they could be infected and then spread it to people back home, or bring it from their hometowns and become vectors within the Tulsa arena. In an attempt to protect itself from lawsuits, Trump’s campaign added language to the event registration stating guests assumed risk for exposure to COVID-19.

Key Words: Trump adviser Kudlow talks up limiting coronavirus liability for businesses: ‘I don’t think there should be a lawsuit’

But meeting with Trump at the White House on Thursday, Oklahoma Gov. Kevin Stitt pledged the state is ready, noting its rate of positive COVID-19 tests is lower than many other states. As of this week, Tulsa County has displaced Oklahoma County as the state’s leading COVID-19 hot spot with 1,825 cases.

“It’s going to be safe,” said Stitt, a Trump-aligned Republican who was recommending dining in restaurants even as the World Health Organization made its pandemic declaration in March. “We have to learn how to be safe and how to move on.”