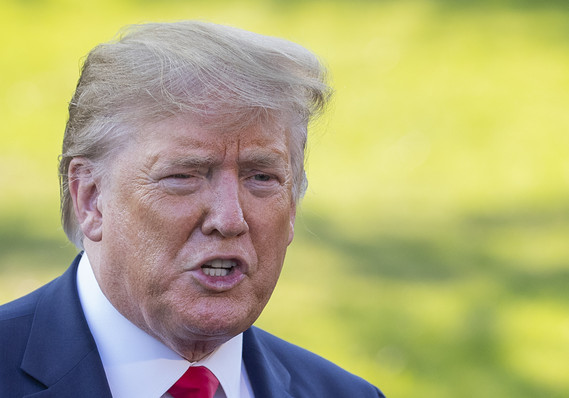 Trump, who has pressed the Fed to cut interest rates to “zero or less,” tweeted his displeasure after the Fed reduced its benchmark short-term rate to a range between 1.75% and 2%.

Read: Fed lowers interest rate by a quarter point, many on panel see another cut this year.

“Jay Powell and the Federal Reserve Fail Again,” Trump wrote, referring to the Fed chairman. “No ‘guts,’ no sense, no vision! A terrible communicator!”

On Twitter, Trump said he’d instructed Treasury Secretary Steven Mnuchin to “substantially increase” sanctions on Iran. Speaking in California, he told reporters details would be announced over the next 48 hours.

Trump spoke after Secretary of State Mike Pompeo called the weekend attacks on Saudi Arabia’s oil infrastructure an “act of war” and an Iranian attack . Iran has denied responsibility.

The U.S. already has numerous sanctions on Iran, having reimposed penalties that had been lifted as part of the Iranian nuclear deal .

Oil futures were lower for a second day in a row Wednesday. Both West Texas Intermediate   and Brent   crude shot up Monday in the wake of the weekend attack in Saudi Arabia.

Trump, traveling in California for fundraising events, also tweeted that he’d named Robert O’Brien to replace John Bolton as national security adviser. O’Brien has been Trump’s special envoy for hostage affairs and may best be known for his efforts to win the release of American rapper A$AP Rocky from a jail in Sweden.

On the same day he was visiting the state, Trump tweeted that his administration was revoking California’s federal waiver to set its own auto emissions standards. He said the move would produce cheaper but safer cars.

As The Wall Street Journal reports, the White House proposed the revocation last year as part of an effort to revise fuel-economy rules for car companies that were set in 2012 under the Obama administration. The chairwoman of the California Air Resources Board said the state would sue the Trump administration to protect its waiver , the Journal said.