This column provides a daily update on key presidential actions as well as comments, whether spoken aloud or on Twitter, by President Trump. Like the stock market, the deadline for Trump Today action is 4 p.m. Eastern time, even as we acknowledge that substantive news can and does occur after hours.

President Donald Trump signed the Republican tax bill on Friday, predicted he’ll start working with Democrats “at some point,” and arrived in Florida for a vacation at his Mar-a-Lago resort.

Trump signed the tax bill into law in the Oval Office, touting what he says are its benefits and saying “corporations are literally going wild” due to the changes it makes. He confessed he had intended to sign the bill more ceremonially after the holidays, but, after watching television news this morning pondering whether he’d keep the promise of signing it before Christmas, he opted to convene the “rush job” event on Friday.

On Twitter early Friday, Trump made reference to companies including AT&T /zigman2/quotes/203165245/composite T -2.22% and Comcast /zigman2/quotes/209472081/composite CMCSA -2.77%   , saying the tax bill “has taken on an unexpected new source of ‘love’ — that is big companies and corporations showering their workers with bonuses.” Bank of America Corp. /zigman2/quotes/200894270/composite BAC +0.83% will also give $1,000 bonuses tied to the tax overhaul to more than half of its employees, The Wall Street Journal reports .

The new tax law permanently cuts the corporate rate to 21% from 35%, but makes individuals’ cuts temporary. Trump also signed a bill to keep the government operating through Jan. 19.

See: Here’s what all 30 companies that make up the Dow industrials think about the tax cuts. 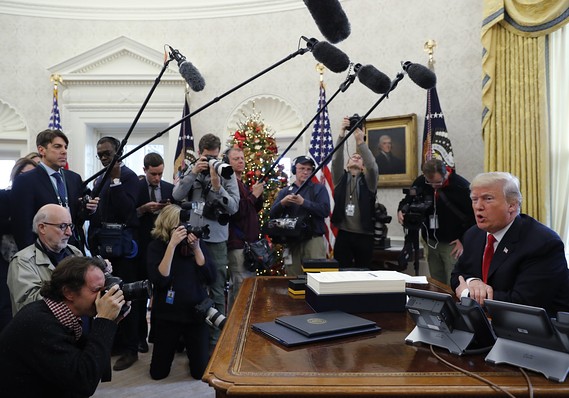 Reuters
President Donald Trump sits at his desk while signing the $1.5 trillion tax overhaul plan in the Oval Office on Friday.

After no Democrats joined Republicans to vote for the tax bill, Trump said he predicted “at some point, and for the good of the country,” the two parties will start working together. “Infrastructure would be a perfect place to start,” Trump said on Twitter.

It’s the second time this week Trump has mentioned the issue. On Monday, following the derailment of an Amtrak train in Washington, he said the incident showed “more than ever why our soon to be submitted infrastructure plan must be approved quickly.” The administration is preparing to roll out an infrastructure rebuilding plan next month.

Read: Cohn says infrastructure is next on Trump’s agenda.

After touching down in Palm Beach, Trump tweeted that Florida Rep. Ron DeSantis would make a “GREAT” governor of the state. DeSantis hasn’t announced a campaign, but is expected to do so. The Tampa Bay Times notes the Republican has been seen with Trump this year, including flying with the president to a rally in Pensacola.