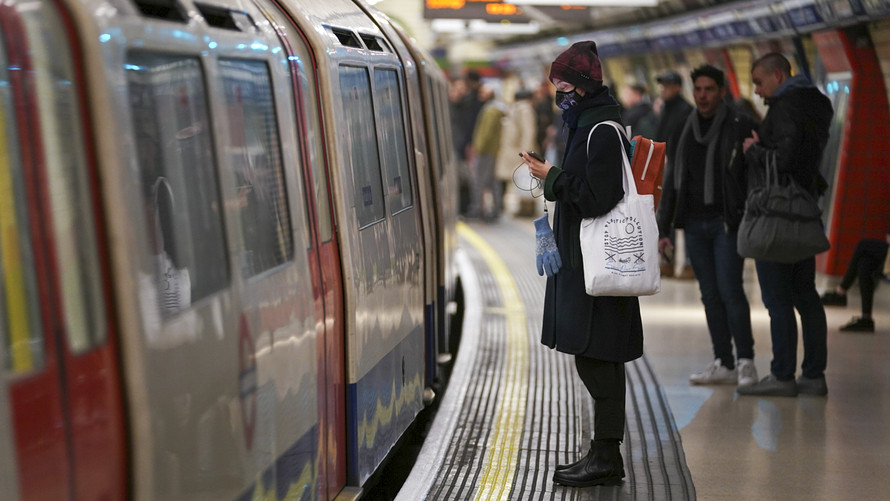 Getty Images
Passenger on the London Underground wears a surgical mask during the coronavirus pandemic.

The U.K. government has unveiled plans to gradually ease lockdown restrictions and begin to restart the economy.

It comes as a number of U.S. states slowly emerge from lockdown, while others consider plans to ease restrictions.

Step 1 of the government’s plan will come into force on Wednesday and will see those who cannot work from home return to work. People have also been advised to wear face coverings on public transport and in some shops.

The once-a-day exercise cap will be lifted, and people will be allowed to meet one person from outside their households. International travelers entering the U.K. could also be put into a 14-day quarantine.

In Step 2 of the strategy, schools would begin a phased return — for early years and those with key exams next year — from June 1. Nonessential retailers could also open at the beginning of June, and sporting events could begin behind closed doors. The concept of household bubbles — one household adding another to their group — is also being considered.

By early July — in Step 3 — hospitality venues, including pubs and hotels, leisure facilities, such as cinemas and hairdressers and beauty salons, may be reopened if safe to do so.

“Today marks the first glimmer of light for our faltering economy. A phased and careful return to work is the only way to protect jobs and pay for future public services,” said Carolyn Fairbairn, director general of the business group CBI.

“Businesses are keen to open and get our economy back on its feet. But they also know putting health first is the only sustainable route to economic recovery,” she added.

Some politicians claimed an address given by Prime Minister Boris Johnson to the nation on Sunday sparked confusion by appearing to tell millions of people to return to work this morning. Details of the strategy just released show it comes into force on Wednesday, further clarifying that employees should continue to work from home if possible. Certain sectors of the economy would be allowed to reopen, it said, and workplaces should follow new guidelines called COVID-19–secure — but those will not be published until later on Monday.

“Sectors of the economy that are allowed to be open should be open,” states a 50-page government report published Monday. “[F]or example, this includes food production, construction, manufacturing, logistics, distribution and scientific research in laboratories.”

Workers have also been encouraged to avoid public transport and walk, cycle or drive to work. Further guidance on transport will be released later on Monday, Johnson said.

After much speculation over whether people would be required to wear face masks, amid a well-documented shortage of protective equipment, the government has advised people to wear face coverings in enclosed places, such as in shops and on public transport.

Medical-grade face masks and other specialist equipment will be reserved for health-care workers who need it, and people may need to make their own.

“Homemade cloth face-coverings can help reduce the risk of transmission in some circumstances. Face-coverings are not intended to help the wearer, but to protect against inadvertent transmission of the disease to others if you have it asymptomatically,” the report, titled “Our plan to rebuild: The UK Government’s COVID-19 recovery strategy,” states.

The government has also published guidance on how to make face coverings.

Beginning Wednesday people in England, though not the entirety of the U.K., will be able to meet one person residing outside their households for the first time since the lockdown began in March, provided social-distancing guidelines are met. The government is also considering the New Zealand model of “household bubbles” — allowing more than one household to interact with each other in the coming weeks. The U.K.’s scientific advisory group SAGE is looking at whether one household could expand their group to include another. It said such a move would give those isolated more social contact and allow two households to share child care.

“It is not OK to be in multiple household groups: if Household A merges with B, Household B cannot also elect to be in a group with Household C. This would create a chain that would allow the virus to spread widely,” the government report states.

The government also set out five alert levels to communicate the level of risk to the public, ranging from Level 1, where COVID-19 is not known to be present in the U.K., to Level 5, at which there is material risk of health-care services being overwhelmed. The country is currently at Level 4: “a COVID-19 epidemic is in general circulation; transmission is high or rising exponentially.”