Can This Tiger Keep Roaring?

SHOP THE INTERNET FOR a computer product, like the 17-inch ViewSonic monitor. One of the cheapest prices you'll find is the $139.99 quote from TigerDirect -- a merchant owned by Systemax.

But you'd have to read the small print to learn that TigerDirect's quoted price assumes you collect the $50 manufacturer's rebate. That's no small assumption, given the widespread complaints about TigerDirect's failure to pay rebates.

That's a shame, given that those disputed rebates might partly account for the unusually fat gross-profit margins shown by the company: At 16%, the gross margins are four or five percentage points higher than those of peers like PC Mall (MALL) or Zones (ZONS). 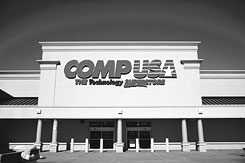 Now some of that discrepancy might merely result from the bookkeeping problems that Systemax acknowledges in its securities filings. But if the company's margins have been fattened by failure to pay out the rebates it gets from manufacturers, then an end to that alleged behavior might crimp profits. If margins narrow, Systemax will also have a tougher time going up against giants like Best Buy /zigman2/quotes/205918291/composite BBY +3.00% (BBY), Circuit City /zigman2/quotes/201492453/composite CC +0.09% (CC) or Dell /zigman2/quotes/203822527/composite DELL +0.64% (DELL).

Systemax shares trade at about 15.25, a modest multiple of just 11 times trailing-12-months' earnings. But that valuation arithmetic assumes the profits are sustainable. If not, neither is Systemax' stock price. Regrettably, Systemax refused Barron's repeated requests to discuss its rebates or its business.

The origins of Systemax go back more than 50 years, to an industrial-supply company started by the father of chief executive Richard Leeds. Even though the company came public in 1995, two-thirds of the shares remain in the control of Leeds and his two brothers, who also have executive positions with the company. The company's highest-paid employee is Gilbert Fiorentino, CEO of the TigerDirect unit, whose online sales of computer products now bring in more than 90% of revenue.

Just this month, Systemax added the CompUSA brand to its portfolio, agreeing to pay about $30 million to acquire the brand name and up to 16 retail stores from the struggling chain, which had been purchased by private-equity investors last month.

Systemax sales for the September quarter were 20% higher than those a year earlier. But repeated restructuring charges since 2002 have made year-over-year comparisons treacherous. The company had to restate the results it reported for 2003 and 2004, provoking shareholder suits that Systemax settled without admitting any wrongdoing.

Systemax' latest filings with the Securities and Exchange Commission acknowledge significant deficiencies in its financial controls. Those weaknesses affected Systemax' accounting for shipments, returns, co-op ads and customer rebates. Writing to the SEC on Sept. 6, the company said it expected to still be working to fix its accounting problems through the end of 2007, while expressing the belief that any undetected errors didn't exceed 5% of its pretax income.

To stand out in the crowd of online resellers, TigerDirect advertises prices net of any rebate offered by the manufacturer. To collect the rebate-and get the advertised price -- customers must mail proof-of-purchase materials to Systemax' in-house fulfillment operation, OnRebate.com. TigerDirect is not alone in advertising post-rebate prices. But Internet consumer forums like www.ripoffreport.com are loaded with complaints by people who say that Systemax never made good on their rebate applications.

"Having a business model that heavily involves rebates -- there's nothing inherently wrong in that, as long as you play it fair," says Matthew R. Wilson, a Columbus, Ohio, class-action lawyer who's suing TigerDirect and Systemax in a New York federal district court. The suit alleges that TigerDirect advertises the availability of rebates, but then delays paying them or flatly refuses. The lead plaintiff, Kevin Vukson, alleges that he filed for a $40 rebate within days of buying a DRAM-memory module from TigerDirect in November 2006. After four months of inquiries by Vukson, TigerDirect finally sent an e-mail claiming that his rebate application hadn't been filed on time. Systemax is seeking to have Vukson's suit transferred to a federal court in South Florida, where TigerDirect and OnRebate operate.

At the other end of the rebate process, TigerDirect is all too quick to debit manufacturers for consumer rebates -- ac- cording to a suit filed by the maker of i-Rocks computer devices, PC USA, based in Walnut, Calif. The controversy began in 2005, when TigerDirect ordered 14,000 units of an i-Rocks optical mouse. PC USA decided to promote its i-Rocks brand by offering a 100% rebate on the $14.99 mouse. It agreed to have those rebates processed by OnRebate.com.

The mouse maker soon noticed problems with OnRebate's billings, according to the complaint, which was recently transferred to the federal district court in Miami. OnRebate records omitted information on many of the claimed rebates. The mouse maker found itself being charged two and three times for the same customer. When the little company refused to make any more payments until it got satisfactory documentation, Systemax offered to reduce by $10,000 its $38,228 in outstanding rebate debits. PC USA balked. Systemax then deducted all $38,228 from the mouse manufacturer's invoice. It also held on to the remaining 4,000 pieces of i-Rocks product. PC USA alleges that it lost about $90,000 through TigerDirect's misbehavior.

SYSTEMAX HAS ASKED the court to reject the charges, claiming that consumers received the vast majority of the money that TigerDirect withheld from the mouse maker. But records showing that consumers indeed got their rebates haven't yet turned up in discovery, says the mouse company's Pasadena, Calif., attorney, Franky C. Chan.

The Bottom Line: If Systemax's high gross margins have been fattened by failure to pay out manufacturer rebates, then an end to that alleged behavior might crimp profits -- and the share price.

If Systemax debits its vendors for rebates that it never passes on to consumers that would explain why its gross margins are higher than those of other computer dealers. Evidence on that issue may eventually emerge from a civil investigation now under way by the economic crimes unit of Florida's attorney general. In early January, the AG's office subpoenaed Systemax for all records of complaints from customers and vendors, as well as shipping logs and banking statements. Friday was the deadline for Systemax to respond.

Systemax didn't tell investors about the subpoena, or the rebate lawsuits, but the problem merits at least some fine print.