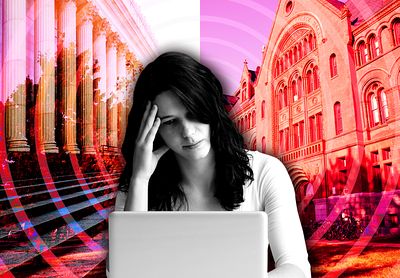 MarketWatch photo illustration/iStockphoto
The coronavirus outbreak is a new kind of legal test for America’s colleges and universities.

In a growing number of lawsuits across America, college students suddenly stuck in Zoom /zigman2/quotes/211319643/composite ZM +0.75%  classes want some of their tuition money back because, they say, this kind of academic experience isn’t what they bargained for.

Now they’re going to have to prove it.

That’s the key question — or at least one of them.

It’s been approximately two months since colleges started cancelling on-site schooling in the face of the coronavirus pandemic.

Though a number of schools have offered pro-rated refunds on room and board, tuition discounts have been a sticking point. And that’s launched approximately 100 class-action lawsuits from students against their schools so far, according to one tally.

So how will this play out in court? That’s tough to say.

Students have sued their schools over tuition long before the pandemic, said Neal Hutchens, a higher education law expert at the University of Mississippi (a school that, as of Wednesday, has not faced a tuition refund lawsuit).

But some of those cases involve allegedly meaningless degrees from for-profit schools, Hutchens noted. In another case, a displaced law school student unsuccessfully sued because he had to study, in person, at a different school after Hurricane Katrina.

There’s nothing at this “unprecedented” scale, said Hutchens. “This is definitely much different.”

Here’s a look at some of the big picture questions:

Is there a ‘contract’ between the school and the students?

It costs an average of $21,950 for one year of tuition, room and board at a four-year public university and $49,870 at a private school, according to the College Board .

That’s a big transaction. And like any transaction, there’s fine print.

Schools and states have varying documents and paperwork that students have to sign, said Christopher Schmidt, a partner the law firm Bryan Cave Leighton Paisner who advises colleges and universities.

But he’s not aware of anything in those written agreements that promises in-person classes.

Furthermore, Schmidt added, it’s difficult to make a blanket statement that the student is the buyer. What if mom and dad are footing the bill, he wondered? How about a student who has a full ride scholarship?

‘There are a host of individual issues the courts need to resolve.’

“There are a host of individual issues the courts need to resolve,” said Schmidt. His firm had counted nearly 100 refund lawsuits as of earlier this week.

Don’t miss: ‘What we are confronting now is really unprecedented.’ Coronavirus-related lawsuits are about to flood the courts

There’s much more to the “contractual relationship,” says Hassan Zavareei of Tycko & Zavareei. That includes the ways schools publicly play up the allure of campus life and in-person classes, he noted.

Zavareei is representing students from St. John’s University in Queens, N.Y., and the University of California school system in lawsuits suing for tuition and fee refunds.

‘All you need in a contractual relationship is promises and consideration.’

“All you need in a contractual relationship is promises and consideration,” Zavareei told MarketWatch.

“The school provides education and it provides room and board and provides services. In exchange for that, you give them the consideration of money. What we are trying to do is to enforce that contract.”

(A St. John’s spokesman said the school is aware of the lawsuit but, as a general policy, doesn’t comment on litigation. The University of California system did not respond to a request for comment.)

Are students getting a low-quality education in the eyes of the law?

No question, says Zavareei. “It’s just a pale substitute for the original,” he said.

Schmidt disagrees. “Fundamentally, the education has still been delivered and credits to a quality degree are still being earned,” he said.

Besides, he added, it’s tricky to make sweeping determinations on the quality of instruction before and after the outbreak. “That turns on a fundamental evaluation of what each school, each department, each major was doing to deliver the course work,” Schmidt said.

Zavareei said he’s ready to do just that, noting fact and expert testimony can show the quality of “what was provided earlier and what’s provided now.”

But judges may not want to play the role of college administrator if past decisions offer clues, Hutchens said, noting he’s not trying to take sides in the debate.

‘Courts have tended to shy away from making academic judgments.’

“Courts have tended to shy away from making academic judgments,” said Hutchens, co-author of “The Law of Higher Education.”

“I’m not sure they want to get into this dueling question of the quality of online versus residential instruction.”

If students win, can schools afford to pay the refunds?

During past recessions, many state schools wound up receiving less taxpayer money from state governments, which had less money to set aside for higher education, Tandberg said.

‘It’s hard to think of an area on campuses that isn’t taking new costs or losing revenue.’

Now they’ll have to brace for smaller public appropriations, as well as no money from events, camps, facility rentals. “It’s hard to think of an area on campuses that isn’t taking new costs or losing revenue,” Tandberg said.

He feels for students and schools alike, noting he has college-age student who’s suddenly stuck with online classes from home.

If schools have less money coming in, they may need to pass along the extra costs to students who, in turn, might have to take out more loans, Tandberg noted. Americans already owe $1.5 trillion in student-loan debt.

Zavareei said he has no control over a college’s balance sheet. “What we can control is establishing and protecting our clients’ rights.” “Everyone is suffering” because of the outbreak, he said. Still, schools “are not entitled to just keep that money.”

Despite the growing number of lawsuits, Hutchens thinks most students and parents are understanding — for now. That goodwill could vanish during the fall semester, depending on how schools proceed with classes come September, Hutchens said.

Some schools have already called off in-person classes and others are planning on-campus returns. A flare in coronavirus cases could undo those plans, he said.

“There will be less patience in the fall if students think they can show up for fall classes and it’s really a repeat of the spring, but they’re asked to pay full freight though they are far from the institution.”