Health experts continue to lament slow rollout of vaccines in U.S. after much-ballyhooed authorizations were granted in early December 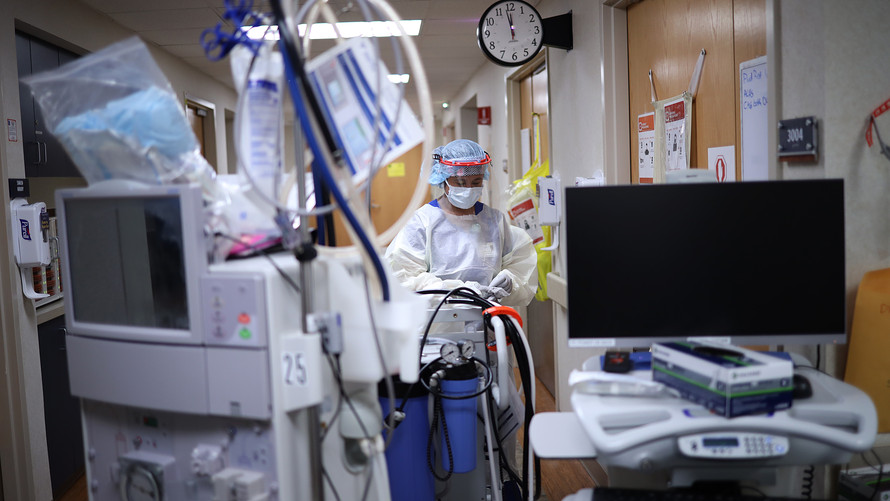 The U.S. set a fresh record for hospitalizations of patients with COVID-19 on Wednesday, and the country’s first case of the highly infectious U.K variant of the coronavirus was found in Colorado, as health experts continued to lament the delayed rollout of vaccines that is hampering the economic recovery.

The much-ballyhooed granting of emergency-use authorizations for two leading vaccines in December — one developed by Pfizer Inc. (NYS:PFE)  with German partner BioNTech SE (NAS:BNTX) and one developed by the biotech company Moderna Inc. (NAS:MRNA) — had raised hopes that the pandemic could soon be contained.

But the U.S. vaccine rollout is happening at a far slower pace than was promised by the Trump administration’s “Operation Warp Speed,” a federal government program created to accelerate the development of vaccines and therapies. The initial promise was for 100 million doses to be delivered by year-end, which was later reduced to 40 million and then 20 million.

The Centers for Disease Control and Prevention has created a tracking tool to monitor the pace of vaccination, but as of Wednesday morning it had not updated since Monday, Dec. 28, when it showed just 2.1 million people had been given the first of two doses and 11.4 million vaccines had been distributed.

Dr. Leana Wen, a practicing physician and former health commissioner for the city of Baltimore, told CNN a lot has gone wrong with the distribution program, starting with an initial overpromising by the Trump administration.

“Another is diffusion of responsibility. In a way, that sounds a lot like the testing debacle, that there is no national strategy. States are supposed to figure it out on their own but without the resources and guidance they need,” she said.

“I’m really concerned because vaccines were meant to be how we get out of where we are, and it just pains me, and I’m sure many of us, so much, because there are millions of vaccines sitting in warehouses, and there are thousands of people dying every day.”

President-elect Joe Biden added his voice to the criticism on Tuesday, lamenting at a press briefing that “the effort is not progressing as it should.”

Biden created a pandemic task force shortly after his election in early November, saying his administration would be “informed by science and by experts.” On Tuesday, he allowed that the continuing battle against the public health crisis represented the “greatest operational challenge we’ve ever faced as a nation.”

However, “If it continues to move as it is now, it’s going to take years, not months, to vaccinate the American people,” Biden added. He said his incoming administration “will spare no effort to make sure people get vaccinated” and noted that he pledged earlier this month to get “at least 100 million COVID vaccine shots into the arms of the American people in the first 100 days.”

White House incumbent Donald Trump, defeated by Biden in November, had this to say:

The U.S. recorded at least 3,626 fatalities from COVID-19 on Tuesday, according to a New York Times tracker , and another 200,902 new cases. The country has averaged 183,030 cases every day for the last week. The U.S. continues to lead the world in cases, at 19.6 million, according to data aggregated by Johns Hopkins University, and fatalities, at 340,004, or about a fifth of the global tally for each.

The U.S. set a fresh record for hospitalizations with COVID-19, according to the COVID Tracking Project. There are now 124,686 patients in U.S. hospitals, breaking the record set a day ago.

Officials in Colorado reported the first known case of the COVID-19 variant that has been moving fast across the U.K., which experts say is more infectious, but does not make people sicker. The case involves a man in his 20s, who is in isolation in Elbert County and has no travel history, according to a tweet from Colorado Gov. Jared Polis, a Democrat.

The U.K. granted emergency-use authorization to the vaccine that has been developed by AstraZeneca PLC and Oxford University, making it the third vaccine to be deployed in the U.K. in the pandemic, after the Pfizer-BioNTech and Moderna ones.

At a press conference, regulators cited the overall 70% effectiveness rate the AstraZeneca vaccine achieved in both of its dosing studies. They also advised against a mixing-and-match approach to administering the AstraZeneca and Pfizer vaccines.

An advantage the AstraZeneca vaccine has over the Pfizer one is that it can be stored at normal refrigeration temperatures, rather than needing supercold storage. AstraZeneca plans to make up to 3 billion vaccines to be distributed throughout the developing world.

The U.K. government said the authorization will allow for the country’s entire population to be vaccinated. The U.K. has been effectively isolated from the rest of the world, as the new variant has rapidly spread.

• Regeneron Pharmaceuticals Inc. (NAS:REGN) said initial data from its Phase 1/2/3 clinical trial of its antibody cocktail in hospitalized COVID-19 patients requiring low-flow oxygen passed a futility analysis, meaning there was sufficient efficacy to warrant continuing the trial. “The results passed the futility analysis (p<0.3 one-sided), as seronegative patients treated with the antibody cocktail had a lower risk of death or receiving mechanical ventilation (HR: 0.78; 80% CI: 0.51-1.2),” the company said in a statement. “The benefit was driven by results starting one week post-treatment, when the risk of death or receiving mechanical ventilation was reduced by approximately half with antibody cocktail treatment, based on a post-hoc analysis.” The company is pinning its hopes on the U.K.-based Recovery trial to provide further evidence the antibody helps lower the risk of death. That trial has enrolled more than 2,000 hospitalized patients. The antibody cocktail, reportedly used in the treatments of President Trump, Trump cabinet member Ben Carson and Trump adviser Chris Christie, was granted emergency-use authorization by the U.S. Food and Drug Administration in November.

• Luke Letlow, an incoming Republican member of the U.S. House from Louisiana, died Tuesday night from complications related to COVID-19 only days before being sworn into office, the AP reported. He was 41. He was admitted to a Monroe, La., hospital on Dec. 19 after testing positive for the coronavirus disease. He was later transferred to the Shreveport facility and placed in intensive care. Letlow campaigned at indoor locations without wearing a face mask, the Washington Post reported, and warned of the danger posed to the economy by measures put in place to arrest the virus’s spread.

• California is extending a strict stay-at-home order as hospital intensive-care units are running out of beds, the AP reported. Dr. Mark Ghaly, the state’s top health official, said that Southern California and the agricultural San Joaquin Valley still have what is considered no ICU capacity to treat patients suffering from the coronavirus and that the state’s restrictions would continue in those regions. Much of the state is under orders to stay home. Ghaly implored the state’s 40 million residents to do just that, and to continue social distancing and wearing masks if they must go out this holiday weekend. He said that while hospital and positivity rates appear to be stabilizing from a Thanksgiving-related surge, that isn’t the case in the southern part of the state, including Los Angeles County.

• Germany suffered a record number of deaths from COVID-19 on Wednesday, just days after launching a vaccination program, the Guardian reported. The number of confirmed cases rose by 22,459 to 1.7 million, according to data from the Robert Koch Institute for infectious diseases. The death toll rose by 1,129 to 32,107.

The coronavirus pandemic has forced many Americans to accept new financial realities. WSJ’s Shelby Holliday traveled to a diverse neighborhood in Philadelphia to learn how neighbors are facing different struggles brought on by the same virus. Photo: Adam Falk/The Wall Street Journal

The number of confirmed cases of COVID-19 worldwide climbed above 82 million on Wednesday, the Johns Hopkins data show, and the death toll rose to 1.79 million. At least 46 million people have recovered from COVID-19.

China, where the virus was first discovered late last year, has had 95,797 confirmed cases and 4,777 deaths, according to its official numbers.

A measure of business conditions in the Chicago area rose December, bucking a trend in other parts of the country where growth has slowed in the face of a record coronavirus outbreak, MarketWatch’s Jeffry Bartash reported.

The Chicago PMI edged up to 59.5 from 58.2, its first increase in three months. Reading above 50 indicate an expanding economy.

Measures of employment and production both improved, but the growth in new orders slipped a bit.

Looking ahead, 45% of the business executives surveyed expect sales to grow less than 5% in 2021. And 43% see growth ranging from 5% to 10%. Most companies said they are unsure if they will adjust their spending plans next year because of the rollout of the coronavirus vaccines. That indicates they are taking a wait-and-see attitude.

The Chicago PMI is the last of the regional manufacturing indices before the national ISM factory data for December is released next Tuesday.

Separately, the U.S. trade deficit in goods climbed 5.5% in November to a record high, reflecting weaker U.S. exports tied to the coronavirus pandemic.

The trade gap in goods widened to $84.8 billion in November from a revised $80.4 billion in October, the government said Wednesday. Imports of goods such as consumer electronics and industrial supplies rose 2.6% to $212 billion in November. Goods imports were up 5.5% compared with a year earlier. Exports rose less than 1% to $127.2 billion, however, and they are down 6.6% compared with one year ago.