We need tech more than ever, but that doesn’t mean we are willing to pay for it

The tech industry in the age of COVID-19: People are online more than ever, but tech companies aren’t in line for an immediate financial windfall 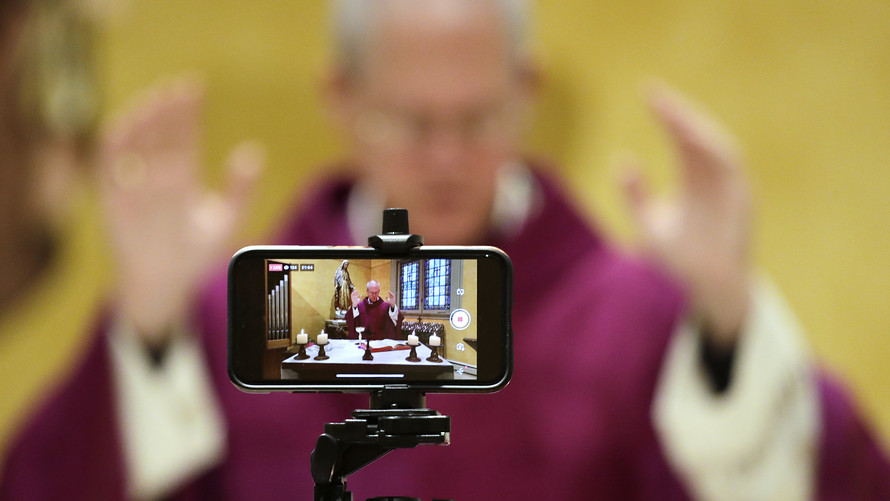 Associated Press
Previously a minor teleconferencing company fresh off an IPO, Zoom Video Communications Inc. has become a home for activities including church services in the COVID-19 pandemic. That hasn’t always been good for the company, though.

When COVID-19 began spreading and forced everyone to stay at home, many discovered Zoom Video Communications Inc.

The Silicon Valley company had gone public less than a year earlier thanks to an easy-to-use teleconferencing product that was beloved by technology workers and others who needed the product, but it suddenly became the home for everything from school classrooms to church services to Alcoholics Anonymous meetings.

Seeing the need that the company was filling, investors more than doubled its valuation just in the first quarter of the year, and the company soon disclosed that users had multiplied by more than 20 in just a month.

In the short term, however, this sudden spike in usage will not mean a direct financial windfall for Zoom (NAS:ZM) . While some of those millions of new users are paying for the service, the majority are not. Meanwhile, Zoom is likely paying for computing power from the cloud to support them and working to maintain a stable system, while frantically updating the software to paper over security and privacy issues that has state attorneys general and class action lawyers circling the company like hawks.

For more: Zoom Video lurches from boom to backlash amid privacy issues

The quarterly earnings season — which kicks off for tech next week with companies like Netflix Inc. (NAS:NFLX)  , whose stock just rocketed to fresh record highs despite the scary pandemic — will be the first glimpse at that dichotomy, as the global economy starts to sputter.

“I have never seen anything like this,” said Dan Ives, managing director, equity research at Wedbush Securities. “No one has. We are going into some unprecedented territory, it’s like playing darts with a blindfold.”

MarketWatch has detailed what the large tech companies and some other prominent businesses face as the world attempts to beat back the COVID-19 pandemic . Each sector of tech has a different set of issues going on in its business that complicate its financial picture and current prospects during the pandemic, so here is an overview of what they face in the coming days and months.

Ad-supported companies face a super-sized version of the Zoom issue: While their free platforms and services are being flooded with users, advertisers are cutting marketing budgets. That will show up later down the line. According to the consensus, earnings in this category, which includes Alphabet Inc.’s Google (NAS:GOOG)   (NAS:GOOGL) , Facebook Inc. (NAS:FB)  and Twitter Inc. (NYS:TWTR)  will jump 35.3% in the first quarter, but will tumble nearly 12% in the second quarter, as costs rise and revenue slows. Those second-quarter estimates are subject to change after the companies detail their expectations this month.

“Our conversations with industry contacts suggest digital media spending remains under significant pressure into early April, and while Q2 likely marks a bottom, ad budgets are unlikely to recover meaningfully until closer to the seasonally important Q4,” Colin Sebastian, an analyst with Robert W. Baird, wrote in a recent note.

Facebook, for example, is seeing unprecedented traffic in services such as Facebook Messenger phone calls and WhatsApp, traffic levels that it has only seen in the past on holidays like New Year’s Eve. But its costs are going up to support all these services, some of which like WhatsApp are not generating much revenue, and advertisers are dropping like flies.

Many investors initially guessed that media companies will be among the biggest winners as everyone stays home and watches more movies and television shows. But the tale of two entertainment companies, Walt Disney Co. (NYS:DIS)  and Netflix Inc. (NAS:NFLX)   show that results will likely be uneven.

Factset estimates predict that in the entertainment sector, which also includes a few video game makers like Electronic Arts (NAS:EA)  , earnings will tumble 25.5% in the first quarter, and plunge 70% in the second quarter, brought down by Disney and Live Nation (NYS:LYV) , the concert ticket sellers.

Streaming media in the age of COVID-19: Click here for more on Netflix and Disney

“The widespread temporary closures of movie theaters and theme parks, as well as sports events, live entertainment, and other venues of mass gathering ... should result in a significant loss of revenues for several constituents, many of which were still incurring fixed expense overheads,” Sam Stovall, Chief Investment Strategist at CFRA, wrote in a recent note.

Netflix, for the most part, is seen as one of the big winners, but the temporary inability to film and debut new shows and movies could have some impact on its viewership if the sheltering in place continues for many months down the road. It will likely be tougher for some of its new rivals to catch up, though, including Disney.

Computer hardware and devices is another area of a story with two sides. While many devices, such as PCs, laptops and printers, are in demand as more employees buy additional equipment to work from home every day, the electronics supply chain had a big disruption in the first quarter. PC shipments fell 9.8% in the first quarter, according to IDC, due to supply chain issues, such as temporarily shuttered manufacturing lines.

Overall, the hardware and peripheral sector will see earnings drop of about 8%, according to FactSet, pulled down by HP Inc. (NYS:HPQ)  , corporate-computing sibling Hewlett Packard Enterprise Co. (NYS:HPE)   and Apple Inc. (NAS:AAPL) (NAS:AAPL) The second quarter, at least for now, is expected to see a slight rebound, with earnings expected to fall 1.4%, as manufacturing has come back, but with nearly every company removing their guidance, it’s fair to say that all estimates will be in flux.

(NAS:AAPL) Normally the big star of tech hardware, Apple has had an especially scary start to the new year, with several weeks of manufacturing facilities shut down in China during the onset of the coronavirus. Its retail stores, outside of China, are now closed at least through May. Wells Fargo analyst Aaron Rakers has already called Apple’s March quarter “a throw away quarter.”

Apple in the age of COVID-19: Can new iPhones be made, and who will buy them?

The second quarter is expected to see some improvement, with demand in China returning as the country has contained the virus and starts to return to work, and Apple reopening its retail stores there in mid March. Apple did an unprecedented launch of its second generation, lower-priced iPhone SE via a news release, but most analysts don’t expect consumers to upgrade their phones on a whim right now, although the budget price of $399 may be appealing to consumers who are in major need a new phone.

“In China, iPhone demand is rebounding significantly,” Ives said in an interview. “But in the U.S., the average consumer is focused on getting groceries and hand sanitizer.”

Ives and a few other analysts now expect Apple’s much anticipated 5G iPhone fall launch until the end of the year, pushing out that expected revenue to calendar 2021. Ives noted that Apple has “one shot” at its first 5G launch, “and tepid success out of the gates due to a lukewarm consumer appetite would be a disaster scenario.”

For the first quarter, chip makers did remarkably well considering the global manufacturing issues, with a few standouts such as Advanced Micro Devices Inc. (NAS:AMD)  and Intel Corp. (NAS:INTC) , thanks to a surge in purchases of notebooks and more servers for data centers to expand cloud computing capabilities.

Earnings for semiconductor makers and equipment makers will, on a blended basis, rise 5% in the first quarter, according to FactSet, while second quarter will see slight growth of 3.3%. AMD is expected to have the strongest earnings gains in the bunch, and CEO Lisa Su said in an update about COVID-19 on the company’s website this week that AMD was maintaining a “robust global supply chain” and that it was currently supplying high-performance computing and graphics products “with minimal disruption.”

Semiconductors in the age of COVID-19: Click for more on Intel and Advanced Micro Devices

But on the other side, it’s not clear how long this demand will last for chip makers, and the second half could be a big disappointment after the surge of purchasing.

“These industries are the most prone to expected lower consumer spending ahead,” Stovall of CFRA said.

The cloud is probably the biggest beneficiary of the pandemic, as companies are forced to offer some kind of cloud — either private or public — with computing resources for their employees. One company seeing huge demand from both consumers and business but also faces its own issues is Amazon.com Inc. (NAS:AMZN) (NAS:AMZN) , because of higher costs associated with the pandemic.

(NAS:AMZN) Amazon is seeing a massive spike in e-commerce, as it is a major lifeline to the outside world for deliveries of much needed goods. But it has higher costs with the increase in demand for deliveries and employees, who risk exposure working in warehouses and delivering products. Baird’s Sebastian raised his revenue estimates for Amazon’s first and second quarter and trimmed profit estimates below the consensus, saying that he was “balancing strong consumer e-commerce trends with recent logistical challenges and added headcount.”

Even so, Amazon remains one of the most uniquely situated to benefit from so many aspects of the coronavirus with everyone at home: its Whole Foods Grocery unit, Prime streaming service and its AWS cloud computing services are all in huge demand right now.

Amazon’s biggest rival in the cloud, Microsoft Corp. (NAS:MSFT)  is also seeing a surge for its Azure cloud services, and it has been also touting its new Teams service as a rival to the collaboration software from Slack Technologies Inc. (NYS:WORK) . But within its cloud business, Microsoft lumps in revenue for sales to servers and other IT products in its “Intelligent Cloud” segment and its legacy Windows business will continue to drag down the PC business, where analysts have lowered their expectations for in the last couple of months.

Cloud-computing giants in the age of COVID-19: Click for more on Amazon and Microsoft

Ives of Wedbush remains the most bullish on the cloud sector among the tech crowd, even amid the economic uncertainty . Wedbush even recently partnered to create a pure-play cloud ETF made up of small- to medium-cap cloud-computing stocks with the ticker IVES.

But the next few quarters for tech investors are going to be tough for investors, he said, while they deal with the confusing elements of how the virus is effecting companies.

“There is a disconnect between the near-term fundamentals and what the stocks are going to do,” he said, predicting the next few quarters will have companies ratcheting down expectations and numbers coming down across the board.

“There is not one investor not looking for numbers to be cut and guidance to be taken off the table,” he said.