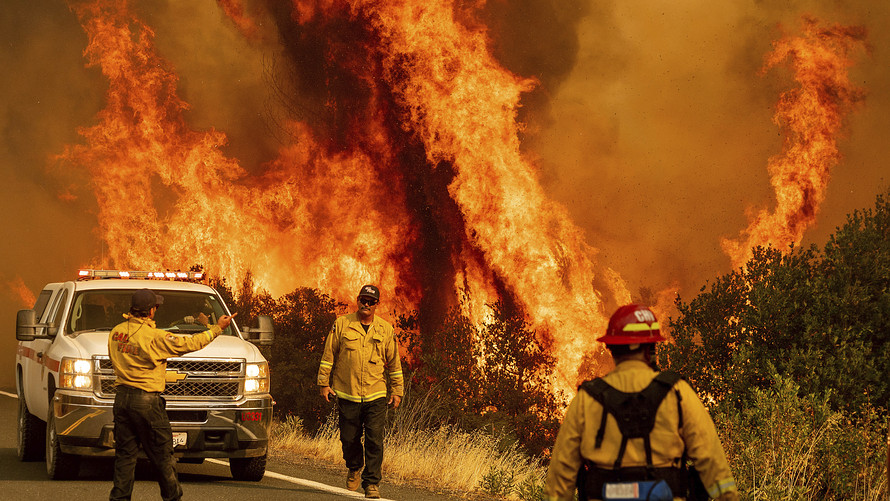 SAN FRANCISCO — California fire officials are cautiously optimistic after dodging a major lightning storm, but they are pleading with residents to stay out of evacuation zones and prepare for days away from home as three massive San Francisco Bay Area wildfires rage on, suffocating the region with smoky air.

Gov. Gavin Newsom said this week will be critical as more than 14,000 firefighters battle 17 major fire complexes, largely in Northern California where wildfires have surrounded the city of San Francisco on three sides, singeing coastal redwoods that have never been burned. The wildfires, all caused by lightning, have been burning for a week.

“We are dealing with different climate conditions that are precipitating in fires the likes we haven’t seen in modern recorded history,” he said Monday.

A warning about dry lightning and winds that could have sparked more fires was lifted for the San Francisco Bay Area on Monday morning, a huge relief to fire commanders who said the weather was aiding their efforts as firefighters pour in from out of state. Temperatures are expected to be hot again this week.

At an evening news conference, officials said progress has been made against a huge fire in San Mateo and Santa Cruz counties with the help of rain Sunday evening and calmer weather Monday.

“With the clear air, we were able to fly a lot more aircraft,” said Mark Brunton, operations chief with the California Department of Forestry and Fire Protection, of Cal Fire.

Helicopters dropped 200000 gallons of water on the blaze, he said, calling it “the best day yet.”

Fire lines on the fire’s southern border appeared to be holding, he said.

But officials warned the danger was far from over and called the fires complex and large. They admonished residents to stay out of evacuated areas and warned looters they’ll be arrested.

Not knowing whether her home is still standing is the hardest part, says Barbara Brandt, a Boulder Creek resident who fled the Santa Cruz area fire Tuesday night.

“The last few days have been a roller coaster,” she said. “You get conflicting reports. You don’t know what your life is going to be like. We don’t know when we can go back, but we know it’s not going to be for a long time.”

When Brandt evacuated with her 94-year-old father, they figured the order was just a precaution. It was smoky, but not the massive complex of fires it is now. Her cats weren’t inside so she left without them, thinking they’d be back soon.

She went back Wednesday to put her cats in the house and feed her chickens. On Thursday, she returned yet again — this time to grab the cats.

North of San Francisco in wine country, Tim Ireland, 48, and Sherri Johnston, 47, were heading back to their destroyed Healdsburg home in Sonoma County to look for one of their dogs. The dog refused to get into the car when they fled.