Welcome to New York! Don’t you dare go outside!

Can new quarantines keep the deadly virus away? 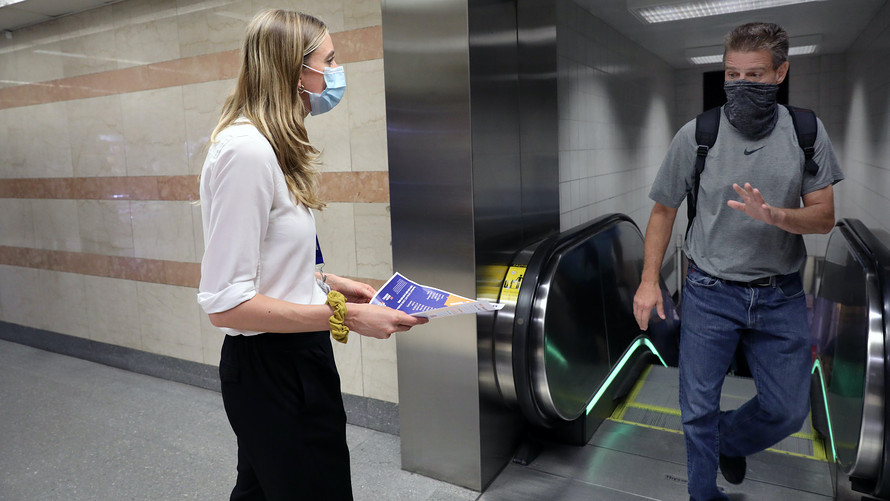 “Nobody asked me to fill out anything.”

Roberto Gonzalvo, 33, had just stepped off Peter Pan 8733, the afternoon nonstop from Baltimore. He was still adjusting his eyes to the harsh fluorescent glare of New York City’s Port Authority Bus Terminal and about to ride the A train to his cousin’s apartment in Washington Heights. “I gave the man my ticket and that was it.”

He might have gotten in just under the wire.

This was a few hours after Mayor Bill de Blasio and Gov. Andrew Cuomo announced — separately, of course — their latest efforts to shore up New York’s defenses against the coronavirus. Though the state’s infection rate has remained below 1% for a month and counting, things aren’t going nearly so well in many other places. And that has New York officials glancing warily across the map.

On Tuesday, Cuomo said that Maryland and three other eastern states — Delaware, Ohio and West Virginia — were being added to the quarantine list, meaning that anyone arriving from any of those places is supposed to remain isolated for 14 days before stepping outside in New York.

Gonzalvo sounded surprised when he heard that. “It includes Maryland? Are you sure?”

It does now. It’s 34 states in all, including a lot of places that traveling New Yorkers used to like to go. Sure puts a damper on those spontaneous jaunts to Miami or Vegas or New Orleans, the current legal requirement to self-isolate for two weeks after returning to New York. Meanwhile, three former COVID-19 hot spots — Washington, Oregon and Arizona — have managed to earn their way off the bad list. So feel free to book a flight to Portland, Oregon, for some peace and quiet.

But give the Oregon city this much credit: After more than 100 days of protests and street violence over policing practices, the positivity rate is 4.8%, well below the 10% quarantine threshold.

The whole point is to keep New York’s infection rate where it is or send it even lower, and the test data rules. “The infection rate is a pure function of what New Yorkers are doing,” Cuomo told reporters at his office in Manhattan on Tuesday, a refrain he’s been sounding for months.

So can all this quarantining possibly be enforced? Can’t people just come and fade into the New York crowd? The massive numbers seem to say, “Well, duh!”

Travel is still down because of the virus, but just by way of comparison: The Port Authority terminal counted 8,000 buses on an average weekday last year. To that total, add the 290,000 vehicles that crossed from New Jersey into New York City per day, on the George Washington Bridge, Lincoln Tunnel, Holland Tunnel, Goethals Bridge, Outerbridge Crossing and Bayonne Bridge. And then there are the airports, Amtrak, the commuter rail lines, the ferries and — well, it’s a lot of people to notify on their way into New York.

And some of them may not even know the latest wrinkles in the rules, as at least one Port Authority arrivee seemed not to on Tuesday.

For his part, de Blasio said that he was expecting universal voluntary compliance. But just in case, he was sending New York City sheriff’s deputies to provide “educational” presentations on interstate buses and remind everyone of the potential $2,000 fines. Riders on those buses, he said, will be asked to fill out forms detailing where they’ve been, as well as their contact information and quarantine plans while in New York.

“This is so important to keeping us safe,” de Blasio has emphasized.

The efforts don’t stop there. Last month, the city ordered hotels and short-term rentals to require visitors to complete quarantine forms at check-in. Again, universal voluntary compliance is the hoped-for result with fines — and even potential arrest — for those who loudly refuse to comply or whose noncompliance causes harm. One Brooklyn couple was hauled off an NYC Ferry in handcuffs over the weekend at Brooklyn Bridge Park when they refused the captain’s request to wear face masks.

Also see: Why an approved coronavirus vaccine may not end the pandemic quickly

But when the numbers are this large, city and state officials really have no choice but to lean on moral persuasion. In fact, most people seem inclined to cooperate, even if a few never will. At the Port Authority’s north terminal, most people were wearing face masks. Though the crowds at the terminal are noticeably larger than even a week or two ago, they are still down from a normal early September.

“What exactly am I supposed to do?” Roberto Gonzalvo asked before he headed off to the subway. “Stay in the apartment for two weeks?”

He didn’t say one way or another whether he’d be meeting that requirement. But he did keep his black face mask across his mouth and his nose as he walked toward the Eighth Avenue trains.