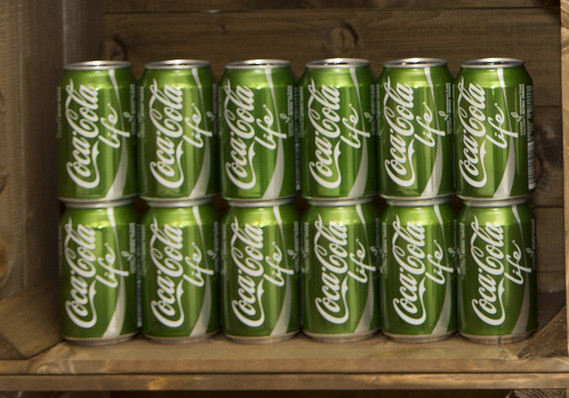 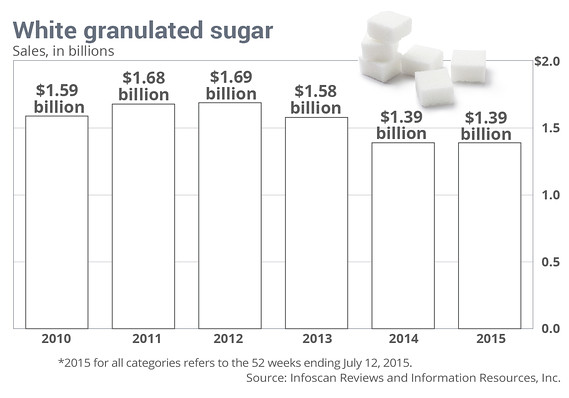 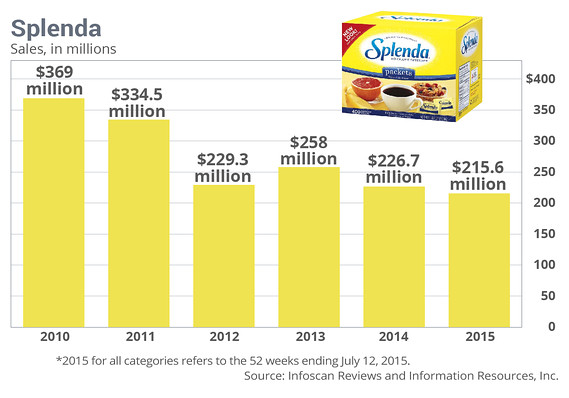 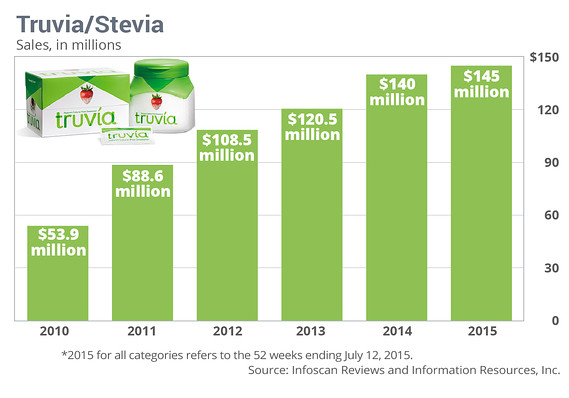 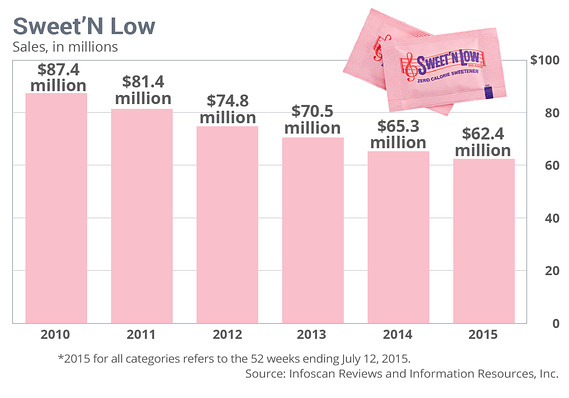 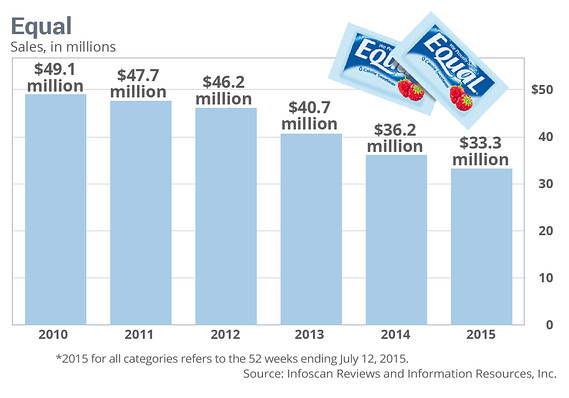 America hasn’t lost its sweet tooth. This week, PepsiCo Inc. /zigman2/quotes/208744353/composite PEP +0.30%   started shipping new Diet Pepsi beverages to stores in the U.S. The drink will now be sweetened with sucralose, the chemical used in the sweetener brand Splenda, instead of aspartame. Last year, Coca-Cola /zigman2/quotes/209159848/composite KO +0.16%   introduced Coca-Cola Life in the U.S. It has about half the calories of a regular Coke, and uses both cane sugar and the natural plant sweetener Stevia, a sugar substitute that has been growing in popularity in recent years. Coca-Cola Life doesn’t use the artificial sweetener aspartame. (In studies, aspartame has been linked to bladder cancer in rats, but the Food and Drug Administration has deemed it safe for consumption.) Sugar and Stevia are holding their own against the artificial contenders.

Here’s how sweeteners have fared over the last six years:

Helped by the chorus of warnings about obesity and diabetes, the nation is no longer adding sugar to its diet. Retail sales of white granulated sugar hit $1.39 billion for the 52 weeks to July 12, 2015, down 12% over the past three years alone, according to data from Information Resources Inc., or IRI. At the same time, sales of several popular artificial sweeteners are down: Big brands including Splenda, Sweet‘N Low, and Equal have all seen sales decline. Consumers are slowly weaning themselves off sugar, says Michael F. Jacobson, executive director of the Center for Science in the Public Interest, a nonprofit research and advocacy group. “People increasingly want to avoid artificial substances.” While the artificial versions are losing out in the sugar rush, several “natural” alternatives are taking off.

Accidentally discovered by U.K. scientists while they were developing new insecticides, Sucralose, the chemical in Splenda (and Diet Pepsi), remains the biggest sugar substitute on the market. Made by Johnson & Johnson /zigman2/quotes/201724570/composite JNJ +0.61%   subsidiary McNeil Nutritionals, Splenda was a big hit with consumers when it was introduced in 1999. Such is its popularity that Coca-Cola introduced a special Splenda edition — the Diet Coke can with the yellow streak — in 2005. It’s also used in a range of candy and cereals. However, some consumers are now satisfying their sweet tooth elsewhere. Retail sales of packets of Splenda were $215.6 million for 52 weeks to July 12, 2015, a 42% drop since 2010, according to IRI. (Johnson & Johnson declined to comment.)

Splenda’s decline owes much to sugar substitutes like Stevia, which claims a more natural lineage, experts say. Stevia is extracted from the leaves of the South and Central American plant Stevia rebaudiana — also known as sugar leaf. It’s also marketed as Stevia extract or distributed as the brand Truvia by U.S. food giant Cargill, one of the world’s largest privately held companies. U.S. retail sales for Truvia alone have nearly doubled since 2010, reaching nearly $100 million for the 52 weeks to July 12, 2015, and surged for Stevia, hitting $45.5 million this year since 2010. “The sales trend for Truvia is remarkable,” says Jacobson. “It looks like Truvia is stealing market share.” Stevia is around 300 times sweeter than sugar but, Jacobsen says, is no match for its taste.

The zero-calorie sweetener that comes in the bubble-gum-pink packet, Sweet’N Low is marketed by Sugar Foods as perfect for cocktails, coffee and pink lemonade. (Despite the packaging, Sweet’N Low doesn’t make the drink pink.) It contains saccharin, which was reportedly discovered in 1878 by Constantin Fahlberg, a chemist working on coal tar derivatives at Johns Hopkins University. Word of caution: Artificial sweeteners can stimulate taste buds, confuse the microorganisms in our gut and make us crave more calories in our diet, says Sharon Fowler, faculty associate at the University of Texas Health Science Center in San Antonio. It too has been hit by competition. Retail sales of Sweet’N Low have fallen nearly 29% since 2010 to $62.4 million for the 52 weeks to July 12, 2015.

Equal is made from aspartame, which is frequently used as a sugar substitute in diet sodas. Widely reported studies have shown a correlation between cancer and aspartame consumption in rats — but not in humans. Still, these studies may have led consumers to search for natural alternatives to sweeten their coffee, says Agiimaa Kruchkin, industry analyst at market researcher IBISWorld. Equal retail sales are down 32% to $33.3 million for the 52 weeks to July 12, 2015 from 2010. Kruchkin expects per capita sugar and sweetener consumption to fall between now and 2017. But Americans’ relationship with sugar remains complicated. “Americans will consume smaller amounts of packets of sweeteners and sugar due to health concerns,” she says, “even as demand for confectionary products increases.”