New survey shows the human toll, forcing many to pay more for education bills than necessities 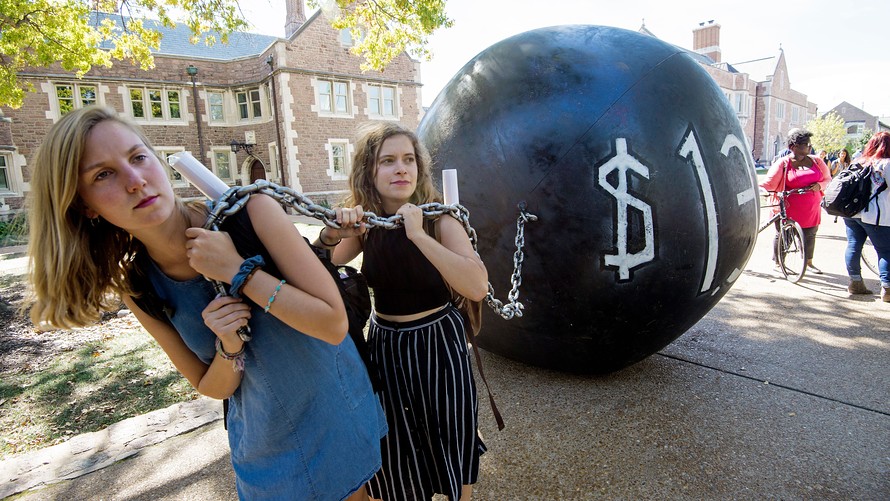 PAUL J. RICHARDS/AFP/Getty Images
Student debt can be a real drag, a new study shows. This photo was taken even before American student debt hit a record $1.5 trillion.

Student-loan debts are crippling the finances of Americans and seriously stressing them out, according to a new survey.

It’s no secret there are widespread hazards with hefty student loans, but a new report from Student Debt Crisis, a nonprofit organization, and Summer, a start-up geared at helping student-loan borrowers figure out repayment, paints a stark picture on just how crushing the obligations can be as Americans try repaying $1.5 trillion in student debt.

· 80% of participants ­— with average debt loads of $87,500 versus average annual incomes of $60,000 — said their student-debt obligations prevented them from saving for retirement.

· Student loans were a “major source of stress” for 86% of the respondents and one-third said student debt was the No. 1 cause of their stress

Monthly student loan payments topped expenses for necessities like food and health care, according to the majority of the 7,095 survey participants.

“It’s frustrating and honestly makes me feel completely defeated,” confessed Colleen from Pennsylvania. She was one of the people quoted in the report, talking about their struggles after incurring debt to get a good education.

Another woman in Texas, Melissa, said, “Regularly, I contemplate selling everything and living in my car to help free up money to pay off the debt sooner.”

The survey respondents are a sliver of the people on the hook for education bills.

Right now, 44 million American are repaying an outstanding $1.5 trillion in student debt, the report notes. That debt number has skyrocketed, tripling since 2005.

The Great Recession, following the collapse of Lehman Brothers and the burst housing bubble, created the perfect storm for massive student debt.

Some observers have called the student-loan industry a “failed social experiment.” And it doesn’t help that debts crash down while many people are already stretched thin, with just a few having rainy day funds for emergencies and unplanned expenses.

“This debt has been a huge burden and point of contention throughout our last 10 years,” Sean, a married Maine resident, told the researchers. “I think my wife and I will both weep the day we are debt free.”