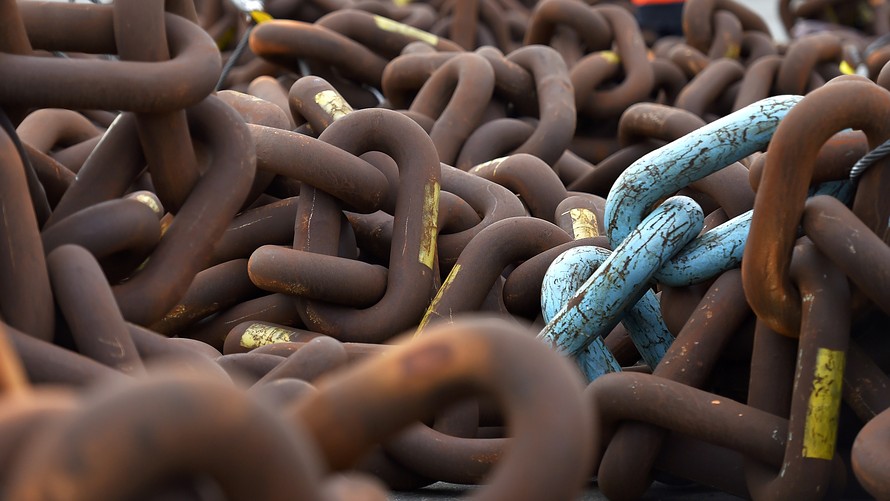 To a lot of observers, the 2017 boom in bitcoin and other digital currencies is highly reminiscent of the dot-com era of the internet’s evolution. This may be cause for concern, given how that turned out, although it could also serve as precedent for why long-term optimism is warranted.

Then, as now, excitement over a new technology led to a speculative frenzy, with massive price appreciation in related securities as investors hope to get in on the action. As seen in the recent surge in LongFin Corp. /zigman2/quotes/204920859/composite LFIN -99.00% — which went from under $5 to more than $140 in less than a week — the mere suggestion that a company is entering the space has brought buyers in by the truckload. Just as companies that added “.com” to their names received a nearly automatic stock boost in the late 1990s, so it has been with companies adding crypto-related terms today.

Related: Long Island Iced Tea soars after saying it will change its focus to blockchain

Given such trends, there have also been calls that the space represents a massive bubble, just as the dot-com era was. According to one analyst, bitcoin is the most extreme bubble ever, while The Wall Street Journal recently reported that $700 million was spent on a “digital token” described as having “no purpose.”

The risk of a bubble bursting is the cause for investor concern. As for the precedent for long-term optimism, well, despite the end of the dot-com era, you’re still reading this on the internet.

As Josh Brown, CEO of Ritholtz Wealth Management recently tweeted , crypto skeptics “assume a price crash means an end to an emerging technology,” adding, “internet stocks crashed 90% in 2000-2001, did we all log off afterwards?”

The emerging technology today isn’t the internet, nor bitcoin itself, but blockchain, the decentralized ledger that bitcoin and other cryptocurrencies run on. This is viewed as a truly transformational structure, one that could have an impact the way the internet did 20 years ago.

“No one knows for sure the short, medium, long-term future for bitcoin. But what we do know is that the blockchain technology that underpins it is revolutionary and is already changing the way the world handles money,” Nigel Green, chief executive officer of financial consultancy firm deVere Group, said in a recent statement.

On a blockchain, so-called miners solve complex computational problems to validate transactions on the network, and are rewarded with bitcoin or other such coins. Because of the way it is structured, it does not require the participation of any kind of middleman — just as bitcoin doesn’t have the backing of a government or central bank — and it is nearly impossible for transactions on the blockchain to be forged.

The potential use cases for this technology are seen as vast. In October, UBS wrote that blockchain was “akin to investing in the internet in the mid-nineties,” estimating the technology could add as much as $300 billion to $400 billion of annual economic value globally by 2027. Blockchain “is likely to have a significant impact in industries ranging from finance to manufacturing, health care and utilities,” among other market sectors, the bank wrote.

“Blockchain could be a revolution in the way everyone — businesses, governments, organizations and individuals — work together,” Goldman Sachs wrote in a recent research report. “It provides a simple, secure way to establish trust for virtually any kind of transaction, helping simplify the movement of money, products or sensitive information worldwide.”

Theoretically, almost any company could find a use for blockchain. Randall Engel, an executive vice president at Newmont Mining Corp. /zigman2/quotes/205356474/composite NEM -2.47% , said that “there are some neat things around blockchain technology that can be applied to different parts of our business,” including “how you register and track land holdings and ownership and things like that.” Engel’s comments were given at a Dec. 6 investor-day call, according to a FactSet transcript.

Last week, Vanguard said it would use blockchain to share data between index providers and market participants; the asset-managing giant said this initiative could result in its index funds more efficiently and accurately tracking their benchmarks.

“It’s beginning to become apparent to me that the true transformational power of blockchain technology will be manifested in the form of cost savings for large companies who switch over from databases to private chains to build new efficiencies,” Ritholtz’s Brown wrote in a blog post . “This is very much how the internet went mainstream. It’s unsexy and does not require that there be a speculative play in the price of any individual coin.”

A crash in the cryptocurrency universe wouldn’t impact the way such blockchains functions, just as the end of Pets.com — a notorious dot-com failure — didn’t presage the end of the internet.

Dot-com era companies “were fundamentally changing the structure of our economy, and while you had to be nimble and wise to take advantage of it in the market, it was a new way of communicating and connecting and buying things,” said Alicia Levine, an investment strategist BNY Mellon Investment Management. “That’s what [blockchain] is doing today; it is also restructuring our economy and the way we do business.”

Levine is skeptical about digital currency prices in the near term, but said she was optimistic about the long-term prospects for blockchain. She noted that while a lot of early internet stocks crashed and burned when the bubble burst, the groundwork they laid eventually led to today’s market leaders in the space, including Facebook  and Google’s parent company Alphabet /zigman2/quotes/202490156/composite GOOGL -0.96% , both of which emerged from the wreckage of the dot-com collapse.

“There will be a lot that falls away when the crash does come, but new values will be created. Then, as now, there was a new world coming.”