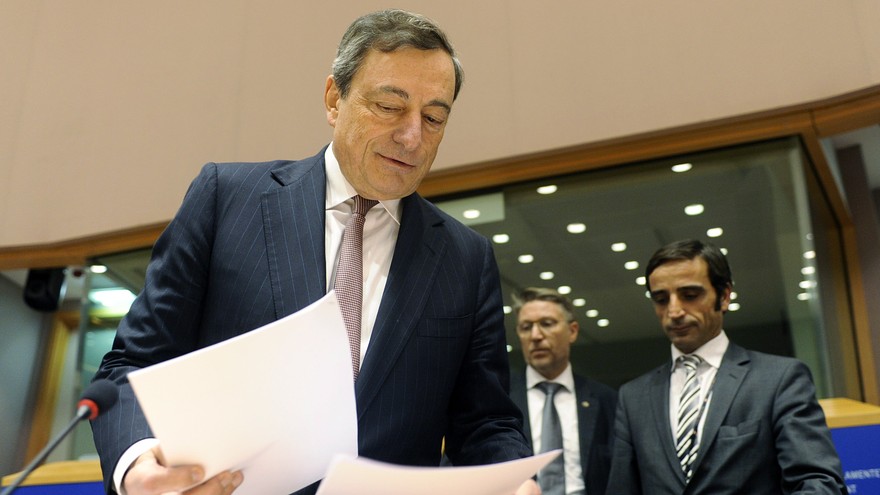 But the pressure on yields isn’t confined to Europe. It has also affected the U.S. Treasury market, spurring demand for U.S. government debt and driving yields down this week.

Treasury prices pulled back after a two-day rally Wednesday, lifting the yield on the 10-year Treasury note /zigman2/quotes/211347051/realtime BX:TMUBMUSD10Y -0.39% by around 3.5 basis points. But the yield remains down by around 10 basis points since the launch of the ECB’s €60-billion-a-month quantitative-easing program on Monday. Yields fall as bond prices rise, and vice versa.

U.S. Treasury yields are expected to continue to feel pressure as European bond yields drop, serving as a counterweight to potential upward pressure on yields tied to expectations the Federal Reserve will begin hiking rates later this year.

ECB President Mario Draghi announced last week that the ECB would buy European bonds with yields as low as negative 0.2%, which is the ECB’s deposit rate.

Since Draghi set the bar so low, European rates are bound to move toward negative values, said David Keeble, head of interest-rate strategy at Crédit Agricole Corporate and Investment Bank, noting that supplies of many European bonds are already quite tight.

The prospect of further declines in the euro, which is trading near a 12-year low versus the dollar, also enhances the attractiveness of Treasurys.

That’s because when a European investor buys Treasurys, they not only pick up income but also benefit from any rise in the value of the dollar, said Dan Morris, global market strategist at TIAA-CREF.

“It seems that when looking for the safety of bonds, investors have the choice of extremely low yielding safe eurozone debt, some of which is offering negative yields, or U.S. Treasurys, where there is a high likelihood of capital losses once interest rates rise,” said Craig Erlam, senior market analyst at online currency broker Oanda, in a note.

“The benefit of the latter is that you stand to benefit from the currency appreciation of the dollar which so many people see as inevitable,” he said.

Another reason why some investors will find Treasurys relatively more attractive is that Europe’s negative yields kill one of the main reasons why investors hold European bonds in the first place: portfolio diversification.

But if yields are already at zero or even negative, the diversification property disappears, because the price cannot go much higher, Rosenberg said.