Why the super-rich get richer — and you don’t

Opinion: Few of the benefits of growth have trickled down to us 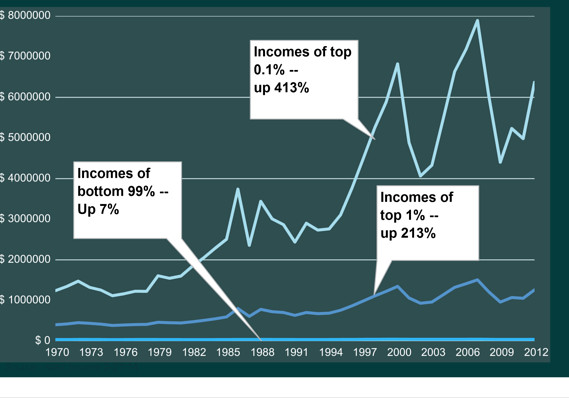 Source: Saez & Piketty
At $44,000 per year, the average income of 99% of Americans has barely budged in real terms since 1970 (flat bright blue line at bottom.) Meanwhile, the average annual income of the top 1% (dark blue) has more than tripled to $1.3 million, and the average for the top 0.1% (light blue) has multiplied more than five times to $6.4 million.

WASHINGTON (MarketWatch) — Amid all the talk about why incomes for most Americans aren’t growing and what we could or should do about it, there’s been relatively little discussion about the other half of the inequality equation: Why the incomes of the very rich are booming.

A handful of people are getting fabulously wealthy, while hundreds of millions are running as fast as they can just to stand still. Many are falling further behind. Although opportunities to move up the income ladder may not be disappearing as some have feared, there is no evidence that those who are being left behind have greater opportunities than in the past to reach that exalted place at the top of the heap. 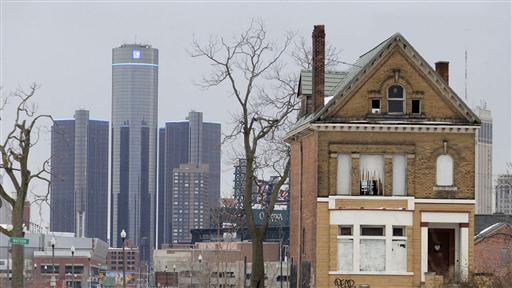 New York University law professor Richard Epstein on how pension reform could save cities on the edge of bankruptcy.

Why are the incomes of the very rich so high? Noted Harvard economist Gregory Mankiw gave the conventional answer last week : They earn every penny. The rich are rich because what they do is so valuable. For instance, Robert Downey Jr. makes a lot of money because people pay to see his movies.

However, most of the very rich aren’t actors, or athletes, doctors, or even small businessmen. For the most part, the top 0.1% are executives of financial firms, corporate executives in other sectors, or lawyers in the service of those corporations.

I’m not saying corporate executives, lawyers, and financiers don’t deserve to be well compensated. Running complex organizations and providing expert advice is extremely difficult to do well, and those who do it well earn their pay. But while some CEOs add real value to their company, many others are mediocre at best. And mediocre ones often make just as much as the talented ones.

The market that determines CEO pay is fixed, like a kangaroo court. CEOs aren’t paid according to the value they bring to their company; their pay is set using a method that’s guaranteed to inflate CEO salaries without any relation to value added. And once CEO salaries are inflated, so are all the other salaries and compensation packages for top executives.

Sounding like the Dr. Pangloss of our age, Mankiw asserts that every market outcome is, by definition, efficient and just. The rich are rich because we live in the best of all possible worlds.

But Mankiw and others may forget that the market structure we have was not handed down from the Almighty by an invisible hand, it is the creation of humans — mostly men, mostly wealthy — who used their political, economic and social power to construct the best possible world for them.

Everyone knows the best way to get rich is to own something that’s both rare and highly valued. If you can increase the scarcity or value of what you own — by creating a monopoly, or by having your colleagues set your salary, or by having your flunkies write the rules on trade, taxes, patents and so on — you can extract extra profits. Economists call these extra profits “rents.”

Read “The Rent Is Too Damn High.”

Some may argue that CEOs and financiers who make up the top 0.1% earn their money because their talents are scarce and their work is valuable, but it’s harder to explain why these executives and financiers get paid twice as much in real terms as they did in the mid-1990s and five times as much as they made in 1970. Or why CEOs in other countries earn much less, even though their companies are just as profitable as ours. Or why the ratio of CEO to worker pay has risen from 20:1 in 1950 to 200:1 today.

Is it that much harder to run a large company in the America of 2014? Are talented CEOs harder to find? Are financiers so much more efficient at channeling the nation’s savings into productive investments?

Or have executives and financiers simply gotten better at extracting rents?