Why it's time to sell

Clearly, markets are getting frothy.

And I know what you're thinking: We're in the cheap-money bull market. So just close your eyes and buy.

Not so fast. Strategists at Credit Suisse, Societe Generale and elsewhere are sounding the alarm that things have gone too far, too fast. The data, and market history, suggests a pullback — on the order of at least a high-single-digit percentage decline on the S&P 500 — is now likely.

It's true that we're not likely to see a more meaningful, 10% to 20% decline until the Federal Reserve and other central banks are forced to pull back, either due to a currency crash, runaway inflation, or a combination of both. And it's true that the economy, while not growing gangbusters, continues to inch forward.

Yet, despite all this, the market is still subject to the vagaries of greed and fear. Right now, there are signs of excessive greed.

Moreover, Garthwaite believes the Fed could start tapering its $85 billion-a-month QE3 stimulus program sooner than many expect, in January rather than in March, because everyone is underestimating the U.S. economy's medium-term growth prospects.

As the pace of fiscal tightening out of Washington slows, as the impact of the budget sequester diminishes, GDP growth could reaccelerate to as much as 3.5% next year (after a short near-term pause).

This, above all, is probably the biggest negative catalyst on the horizon because everyone is so sensitive to the flow of cheap-money stimulus. Merely the fact the Fed removed references to its concern about higher mortgage rates in its October policy-meeting statement sent stocks lower last week. Mixed with the risk of another government shutdown in January, the start of 2014 could be bumpy.

Albert Edwards at Societe Generale laments the market's record median price-to-sales ratio, a global macroeconomic picture that is an "appalling mess," and that fact that "long-term equity investors can find nothing worth buying."

And Jason Goepfert at SentimenTrader notes that the sentiment of newsletter writers like me has reached levels that haven't been seen since at least 1997, active investment managers are carrying their heaviest load of market risk in seven years, and the ratio of assets in Rydex's bull and bear funds has reached levels preceding the last three market corrections. 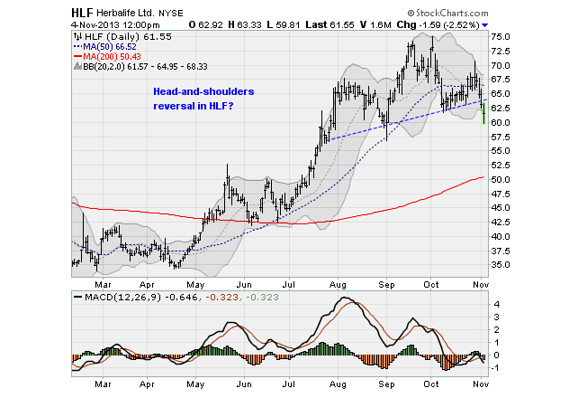 Given all of this, I'm recommending clients book profits in long positions, raise their cash allocations, and look for opportunistic short plays, such as Herbalife /zigman2/quotes/201199224/composite HLF +1.81% and Hertz /zigman2/quotes/227855833/composite HTZ -2.72% , both of which I've added to my Edge Letter Sample Portfolio .