‘I don’t want to be Mr. Doom and Gloom,’ President Trump said 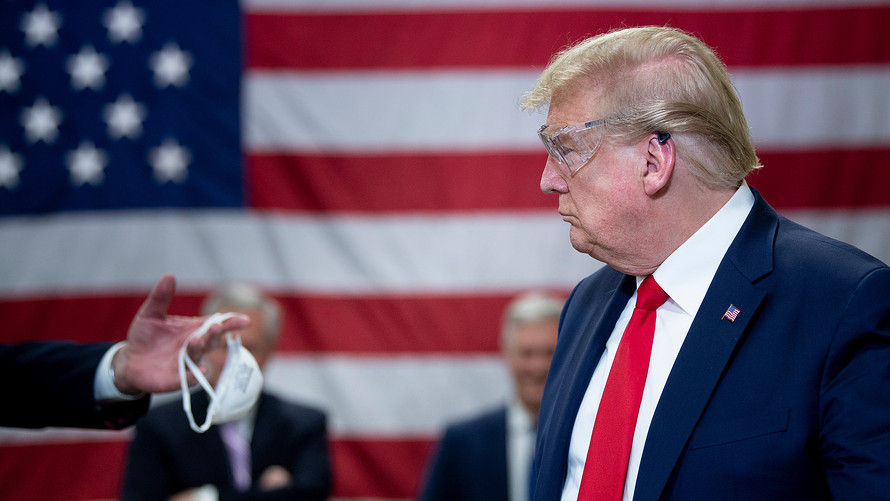 Getty Images
President Donald Trump chose not to wear a face mask as he toured a Honeywell factory in Arizona producing N95 masks during his first trip since widespread COVID-19–related lockdowns went into effect.

President Trump has said people need to get back to work.

The U.S. unemployment rate soared to 14.7% in April after more than 20 million jobs were lost to the coronavirus, but that is just the official number. The real jobless rate was at least 20%, as those people such as furloughed workers who were not working, but still considered themselves as having a job were not counted as unemployed, the Bureau of Labor Statistics said.

President Trump said it’s possible people will die by reopening the economy, but this week he reversed his position on disbanding the White House coronavirus task force, tweeting /zigman2/quotes/203180645/composite TWTR -1.39%  Wednesday that it won’t be shelved by the end of the month as previously suggested, including by Vice President Mike Pence just a day earlier.

The president, who traveled to Phoenix earlier this week to tour a Honeywell face-mask production operation, spoke about the likelihood of more deaths. “Will some people be affected badly? Yes,” he said. “But we have to get our country open, and we have to get it open soon.” The president told ABC News /zigman2/quotes/203410047/composite DIS -1.90% : “The virus will pass, with or without a vaccine.”

‘The virus will pass, with or without a vaccine.’

Trump said he wanted to be a “cheerleader” for the country, and predicted that the economy will be “raging” next year. “I don’t want to be Mr. Doom and Gloom,” President Trump said. “It’s a very bad subject.”

Projections as to how many people will ultimately die of COVID-19 fluctuate, depending on the rate of infections and how soon and/or how fast states reopen their economies. With more states relaxing stay-at-home measures and allow beaches and non-essential businesses to reopen, however, projections of American deaths have spiked.

Youyang Gu, an independent researcher who graduated from the Massachusetts Institute of Technology in 2015, said it’s important to consider a model’s historical accuracy when citing its projections: “A model isn’t very useful if it’s not accurate.” His model is one of several cited by the Centers for Disease Control and Prevention.

He projects 161,727 deaths from the respiratory disease by Aug. 4, with a margin-of-error range of 99,000 to 266,000, taking into account transmission rates, the length of time it takes to recover and how long a person remains contagious. Read more about his model works here .

“We present the most likely dates that the U.S. will surpass certain deaths milestones,” Gu said. “We estimate a 69% chance that the U.S. surpasses 100,000 deaths by June 1, with May 27 being the most likely date,” Gu said. None of these projections take into account a second wave in the fall, a scenario that Anthony Fauci, director of the National Institute of Allergy and Infectious Diseases for more than three decades, said will almost certainly happen. 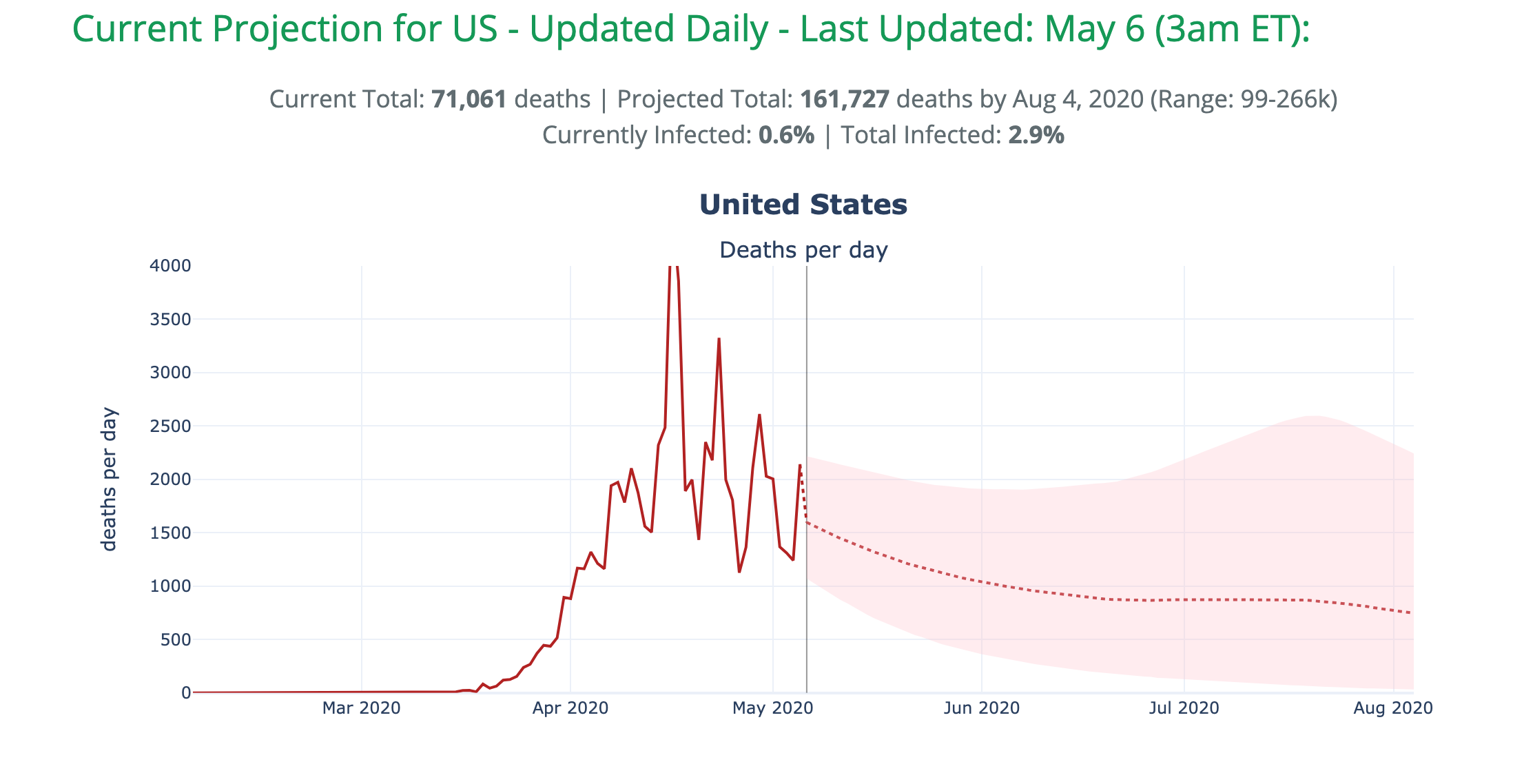 Gu uses artificial intelligence to make his projections, including transmission rates and infection periods, and he uses daily fatality data reported by each U.S. region to forecast future reported deaths. “It’s important to consider a model’s historical accuracy in addition to its future forecasts,” he said .

Approximately 134,000 people in the U.S. could die from COVID-19, more than double an estimate five weeks ago of 72,000, according to the Institute for Health Metrics and Evaluation at the University of Washington’s School of Medicine. It projects 100,773 deaths from COVID-19 by May 21.

That projection, which is one of key measures watched by the White House, could go as high as 243,000, taking into account the institute’s margin of error. Christopher Murray, the director of the institute, cited “premature relaxation of social distancing” as the primary reason for the increased projection.

Coronavirus-related deaths could rise to 3,000 per day by June 1 from 2,000 deaths a day currently, according to preliminary data from the Federal Emergency Management Agency, first reported by the New York Times on Monday. The data are based on a model developed by Johns Hopkins University’s Center for Systems Science and Engineering.

“Our rough guess is that come June, at least 95% of the U.S. will still be susceptible,” IHME’s Murray told NPR . “That means, of course, it can come right back. And so then we really need to have a robust strategy in place to not have a second wave.”

At the beginning of the pandemic, the CDC warned that in a worst-case scenario 2.4 million to 21 million people could require hospitalization, potentially, should they take ill within a condensed time frame, crippling the country’s health-care system. U.S. hospitals have just over 924,000 staffed hospital beds, according to the American Hospital Association. 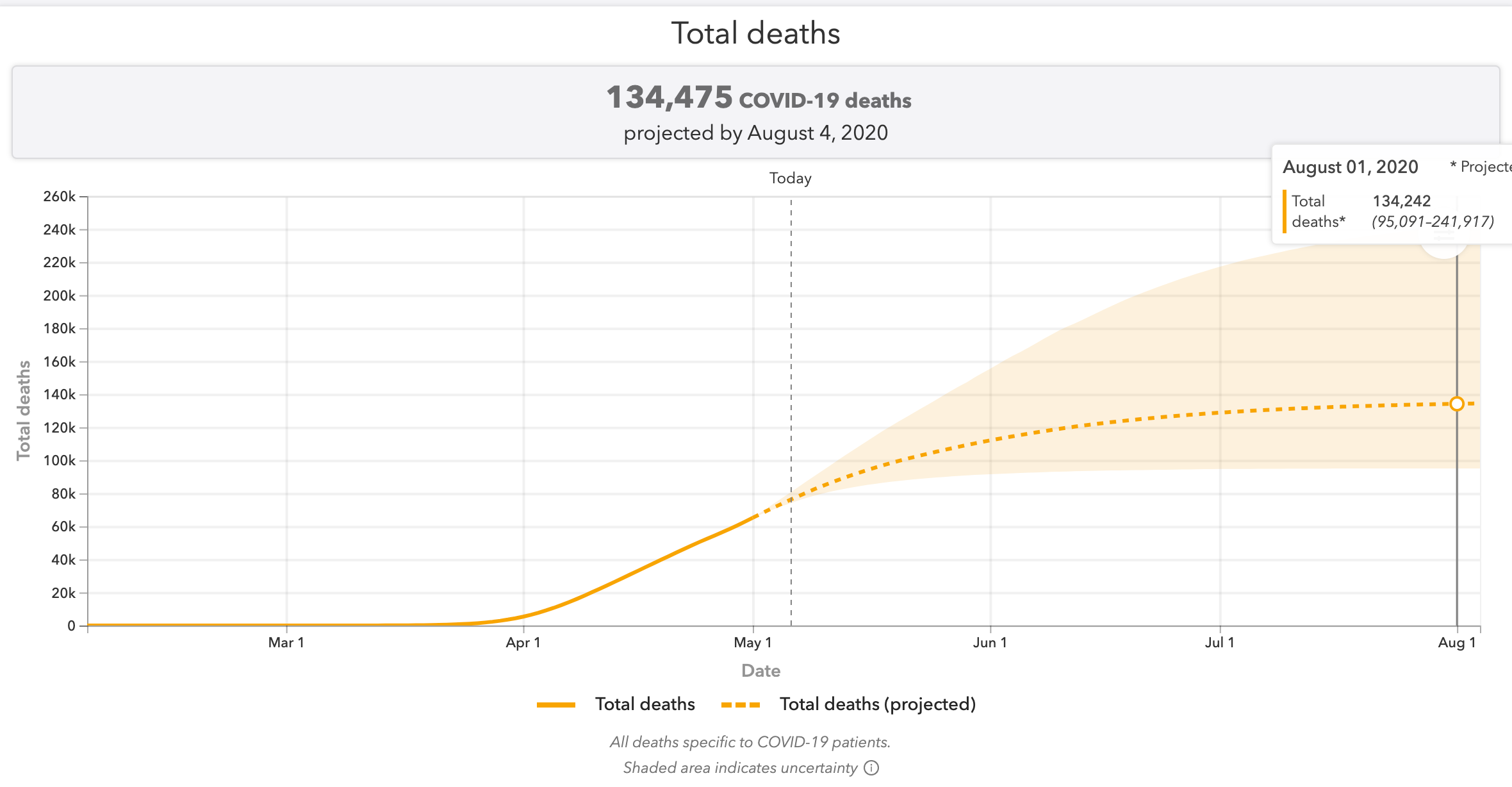 New York Gov. Andrew Cuomo said this week he was surprised that 80% of new cases in New York were people who were at home, and mostly unemployed or retired. “We thought maybe they were taking public transportation, and we’ve taken special precautions on public transportation, but actually, no, because these people were literally at home,” he said.

In Trump’s one-on-one interview with David Muir on ABC News on Tuesday, Muir pointed out to the president that the country has lost more people from COVID-19 than during the Vietnam War. Trump told Muir that closing the economy was the biggest decision of his presidency and that his forthcoming decision to reopen it is also a very big decision.

See: Trump claims his ‘authority is total’ when it comes to reopening economy, as governors establish regional compacts to coordinate approaches

Plus: Trump approved of Georgia Gov. Brian Kemp’s plan to reopen businesses before bashing it

Trump has repeatedly warned that efforts to stem the rapid spread of COVID-19, the disease caused by severe acute respiratory syndrome coronavirus 2, or SARS-CoV-2, are spiraling the economy into another Great Recession; the impact has sent the Dow Jones Industrial Average /zigman2/quotes/210598065/realtime DJIA +0.63%  ricocheting wildly in recent weeks.

Trump acknowledged it will likely lead to more deaths. “It’s possible there will be some because you won’t be locked into an apartment or a house or whatever it is,” Trump added. “But at the same time, we’re going to practice social distancing, we’re going to be washing hands, we’re going to be doing a lot of the things that we’ve learned to do over the last period of time,” Trump said.

The president lamented the current number of fatalities in the U.S. “I always felt 60, 65, 70, as horrible as that is. I mean, you’re talking about filling up Yankee Stadium with death. So I thought that was horrible.”

‘A human life is priceless, period.’

Businesses, including gyms, hair salons, tattoo parlors and movie theaters, are reopening in Georgia, despite the state’s not demonstrating a downward trajectory of cases over 14 days, as had been laid out among the White House’s benchmarks for states reopening. Nor has South Carolina, which has begun reopening beaches and department stores.

Cuomo said reopening is both an economic question and a public health matter. He won't choose between lives and dollars, he told journalists at his daily briefing Tuesday. “There’s a cost of staying closed. There’s also a cost of reopening quickly. That’s the hard truth we are dealing with. Let’s be honest about it. Let’s be open about,” he said.

“The question comes down to how much is a human life worth?” he added. “What the government does today will literally determine how many people live, and how many people die. That is not hyperbolic.”

Cuomo said he, like many people, is tired of worrying about his mother, his brother, and not being able to touch people, but he also said the economy cannot be opened overnight and he warned on Tuesday that, if the number of infections and deaths start to tick up, he will “close the valve” on the economy again. “A human life is priceless, period. Our reopening plan doesn’t have a trade-off.”