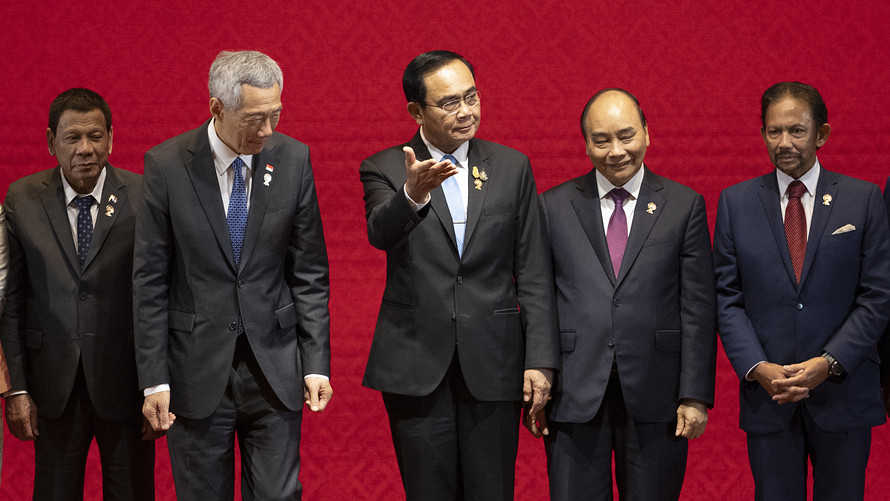 NONTHABURI, Thailand — Southeast Asian leaders agreed Sunday to work with China and other neighbors to transcend conflicts over trade policies and territorial disputes for the sake of stronger economies and regional stability.

President Donald Trump skipped the summit of the Association of Southeast Asian Nations and instead sent his national security adviser, Robert O’Brien. Last year, Trump sent Vice President Mike Pence. Both now are busy campaigning back home, and analysts say their absence left room for China to further raise its profile and clout in the region.

ASEAN leaders “welcomed the conclusion of the Regional Comprehensive Economic Partnership negotiations” and the commitment to sign the free trade deal next year, the summit’s host, Thai Prime Minister Prayuth Chan-ocha, said in a statement on behalf of the 10-nation regional bloc after the annual meetings.

“This will significantly contribute to an open, inclusive and rules-based international trading system and expansion of value chains,” the leaders said.

Officials said there were still final issues to be resolved by the 16 countries involved in the trade deal, which has been under negotiation for seven years.

RCEP aims to level trade barriers between ASEAN members and six other countries in a bloc encompassing nearly a third of all global trade.

ASEAN also reported progress toward setting a code of conduct with China regarding disputed waters in the South China Sea.

Chinese Premier Li Keqiang told other leaders attending that Beijing was committed to forging such an agreement.

“Given the complexity in the international and regional situation, our cooperation is built on a stable structure and moving forward in a positive fashion,” Li said. “This is beneficial to the region and all parties involved.”

“We support stability in the region and by doing so we have been able to cope with the instability elsewhere in the world,” he said.

On the troublesome issue of the South China Sea, Vietnamese diplomats wanted a mention in the ASEAN statement of recent Chinese encroachments into waters where Vietnam, Malaysia and the Philippines have exclusive rights under international law to exploit energy resources.

Earlier drafts mentioned recent “serious incidents.” That was absent from the final statement, perhaps reflecting Beijing’s clout. China and its allies in ASEAN, led by Cambodia, have opposed any attempt to use the annual meetings to vilify the Asian economic powerhouse.

Still, in what appeared to be a compromise, the ASEAN leaders said they “took note of some concerns on the land reclamations and activities in the area, which have eroded trust and confidence, increased tensions and may undermine peace, security and stability in the region.”

Li welcomed progress on negotiating a code of conduct that could avert armed confrontations in one of the world’s most disputed regions.

After being accused of delaying the start of talks for years while building artificial islands with military outposts on contested reefs, China agreed to begin negotiations and both sides announced that the first of three expected rounds was concluded in July.