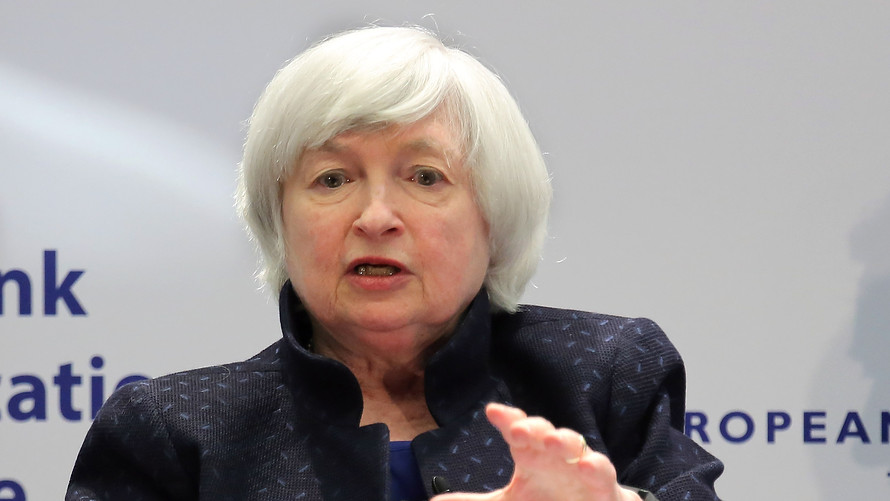 Hannelore Foerster/Getty Images
Chairwoman Janet Yellen is set to end her tenure at the Fed in February.

As Federal Reserve Chairwoman Janet Yellen’s tenure nears its end, she said one of the “biggest challenges” to the central bank remained inflation staying below its 2% target.

Inflation has remained stubbornly low even as slack in the labor market appears to have been much diminished. Core inflation as measured by the PCE price index, which strips out volatile food and oil prices, rose to a 1.3% annual rate in the third quarter, up from 0.9% in the second quarter.

“The issue facing monetary policy at the moment is how to craft a monetary policy that maintains a strong labor market, but also moves inflation back up to our 2% objective,” she said Tuesday evening in a talk with Mervyn King, former governor of the Bank of England, at New York University.

Yellen argued low inflation could prove dangerous, as it could allow inflation expectations to “drift down, and there is some evidence and after many years of low inflation, it may be drifting down.”

She added if it stayed subdued, the impetus to raise and normalize interest rates may not be apparent, leaving the benchmark fed funds rate much lower than historical levels. That could entail a new normal where the neutral rate was much lower than investors thought. The neutral interest rate is the level at which it neither stimulates nor slows the economy, and when the central bank’s tightening cycle is considered to have run its course.

“My colleagues had begun to realize the new normal was really different,” she said. “We have been revising down our estimates [of the neutral rate], and market participants have been doing the same.” According to the central bank’s dot plot, senior Fed officials’ projections of future interest rates, the longer-run terminal rate is 2.75%.

Yet that would leave the Fed with few tools to respond during a downturn and represent a “very dangerous state of affairs,” Yellen said.

At the same time, she added that if the central bank removed policy accommodation too slowly, it risked overheating the labor market and causing inflation to overshoot its 2% goal.

“We want an economy with a strong job market and that is stable as opposed to one that follows boom and bust,” she said.

Though low inflation before 2017 wasn’t a “mystery,” Yellen said she felt lackluster price readings this year were surprising. But she cited transitory factors, like falling prices for unlimited phone-data plans, that may have kept inflation down.

She expected prices to rebound next year, but was “not certain about [the recent weakness in prices], and we’re monitoring inflation very closely. There may be something more endemic and long-lasting in this that might be worth paying attention to.”

Yellen announced Monday that she would not stay on as a governor after she was not re-nominated for a second term at the head of the central bank. Yellen could have stayed on as a governor until 2024.

With her departure, President Donald Trump has the chance to stamp his image on the central bank and can nominate four governors to the board. The turnover at the influential policymaking body has generated uncertainty on the future path of Fed.